BOSS president leads from the front 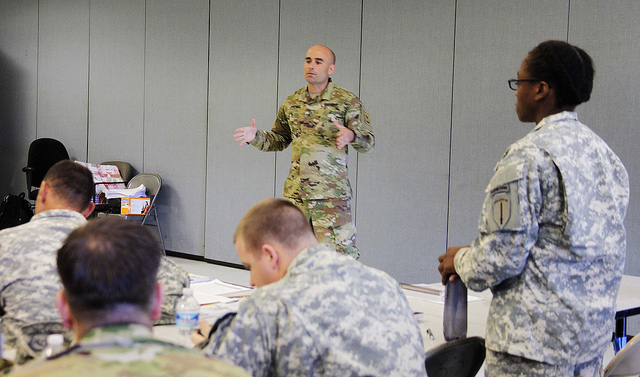 FORT SAM HOUSTON, Texas (Feb. 9, 2016) — Significant developments in one’s career can come from unlikely places. For one Soldier, a community recreation program gave him growth opportunities far beyond what he had imagined.

commissioned officer in charge at Aberdeen Proving Ground, Maryland, is one of the Soldiers behind the creation of the new Army Performance Triad’s “Cooking Guide for Soldiers” and an assessment instructor for the Office of the Surgeon General.

In addition to his already demanding schedule, he serves as his garrison’s president for Better Opportunities for Single Soldiers, a program run by the G9 Family and Morale, Welfare and Recreation Directorate of the U.S. Army Installation Management Command.

Jimenez credits his career accomplishments to the BOSS program. Within a few short years, Jimenez went from a specialist adjusting to his new duty station to becoming a leader in his community.

In March 2012, Jimenez arrived to Aberdeen Proving Ground after finishing an overseas assignment.

“I was having a hard time transitioning and finding my battle rhythm when I first moved to APG from South Korea,” he said.

His roommate, the BOSS program’s vice president at the time, invited him to attend a few meetings. Jimenez immediately became actively involved in the program and was soon selected to be the treasurer in the executive committee.

A turning point in Jimenez’s career, he worked one-on-one with senior leaders. Garrison command sergeants major are the senior enlisted advisors to the BOSS program and work alongside Soldier representatives to get their “boots on the ground” and better understand the issues and challenge single Soldiers face.

“The BOSS program afforded me an opportunity to develop leadership skills while I was a specialist,” he said. “I began to learn more about caring for Soldiers and leading from the front. I was always a hard worker, but the knowledge and wisdom my leaders provided made me efficient.”

His confidence grew as his seniors encouraged him to try new ideas.

“Command Sgt. Maj. James Ervin’s [the previous APG senior enlisted advisor] support and excitement made it easier for us to grow and develop,” he said. “He would sit me down in his office every week and tell me that we [the BOSS Soldiers] are going to make these events happen. Together, we built the program beyond expectations for a small installation.”

Jimenez now serves as the program’s president. Under his leadership, he plans activities and events encompassing the program’s three pillars: quality of life, recreation and community service.

His passion particularly lies in one pillar, quality of life, since he is assigned to the Army Public Health Center. Last year, BOSS representatives and he came together to create the center’s “Cooking Guide for Soldiers.”

Jimenez naturally took the lead on the project. He aimed to educate Soldiers on the basics of healthy cooking such understanding serving sizes, buying essential cooking supplies and knowing how to read nutrition labels.

This is a major topic in the BOSS program. Last September, BOSS representatives worldwide attended the program’s Future Leader Training forum. Life skills, a layer of the quality of life pillar, was in the forefront as representatives learned ways to develop more life-skills-based programming.

“If you look at the Chief of Staff of the Army Gen. Mark A. Milley’s message, it is all about readiness,” said Sgt. Maj. Michael Hatfield, from the G9 Family and MWR, during the forum.

“So we added what we call ‘life skills’ to the training,” Hatfield said. “If a Soldier has a lot of life skills, then the acts of discipline tend to be lower. We are showing how to perform certain skills like cooking a nutritious meal.”

According to Jimenez, the guide has already received good feedback from other Soldiers.

“Every Soldier that has reviewed the book has found something they did not know and said, “Wow, I need to try that!’” he remarked.

“Healthy eating is going to be fun,” he added. “BOSS programs are teaming up with installation registered dietitians to host cooking demonstrations for Soldiers. Some installation programs are taking Soldiers to the commissary and going over nutrition labels and how to pick the right produce.”

In the way ahead, Jimenez will continue to think of innovative ways to educate fellow Soldiers. He and BOSS leaders from other garrisons are planning events and activities to promote readiness while keeping Soldiers engaged and entertained.

He will always credit the BOSS program for getting this far in his career.

“The BOSS program can be seen as a leadership factory,” he said. “Soldiers learn to how to plan, develop, coordinate and most importantly execute.”

It is no easy task to be a BOSS representative according to Jimenez. It takes a certain Soldier to take on such a challenging role, and senior leaders like Hatfield take notice of these emerging stars.

“What we look for in a BOSS president is someone who has more than the average person. We are looking for someone who is able to learn new skills, have people skills, and reach out to their communities,” said Hatfield.

“They are the bridge that bonds a community.”