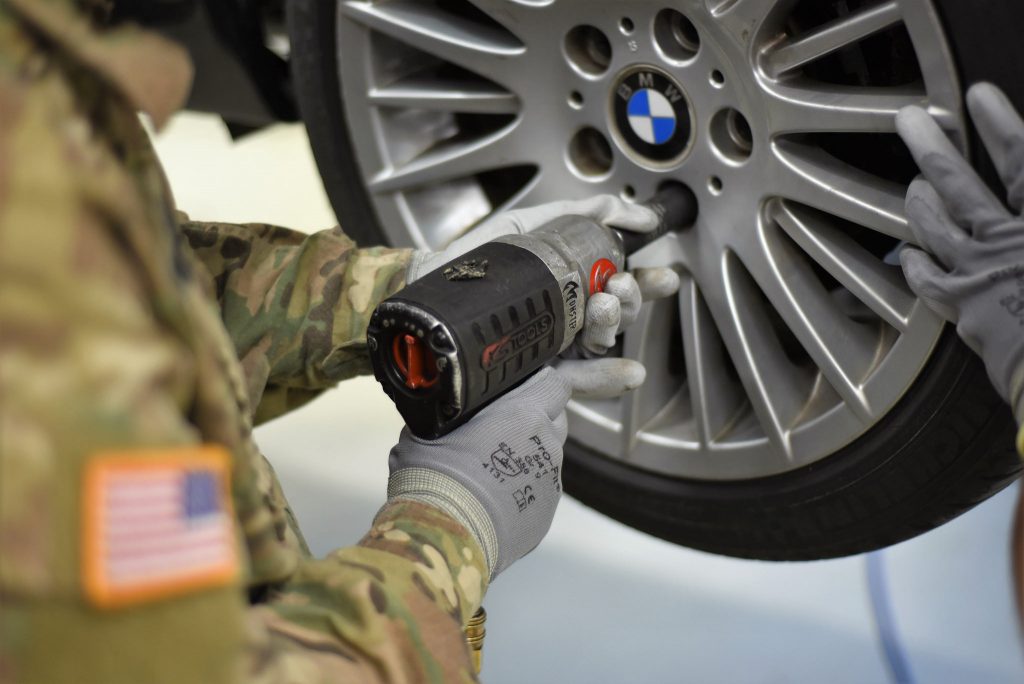 A Soldier reapplies lug nuts after inspecting a car’s brakes Oct. 26, 2016, during an automotive skills course at the U.S. Army Garrison Ansbach Auto Skills Center. The hands-on course, which was organized through USAG Ansbach’s Better Opportunities for Single Soldiers and the Directorate of Family and Morale, Welfare and Recreation, was part of the Department of the Army-funded BOSS Life Skills Program. (U.S. Army photo by Stephen Baack, USAG Ansbach Public Affairs)

ANSBACH, Germany (Nov. 3, 2016) — A dozen Ansbach Soldiers are immersed in a six-week course at the U.S. Army Garrison Ansbach Automotive Skills Center to learn the ins and outs of vehicle maintenance and repair.

The hands-on course, which is organized through USAG Ansbach’s Better Opportunities for Single Soldiers and the Directorate of Family and Morale, Welfare and Recreation, is led by the certified mechanics at the Auto Skills Center and is part of the Department of the Army-funded BOSS Life Skills Program.

The program is designed to encompass a host of practical, everyday competencies for single Soldiers such as financial management, cooking, fitness, outdoor skills, craftsmanship and etiquette.

While some Soldiers in the group have years of experience repairing vehicles — and helicopters — the course welcomes those who have never even changed a tire. The few prerequisites include an ID card, driver’s license and an Auto Skills Center safety card.

“They all have cars, and not all of them know how to work on cars,” said Spc. Aaron Palencia, USAG Ansbach BOSS president. “Changing brakes and changing fluids — that’s something I didn’t know as a new Soldier.

“As soon as I got into the program, I wanted to do something that could actually help out new Soldiers,” added Palencia, who assumed his role as BOSS president in August and has helped organize the classes.

“It teaches Soldiers basic skills that can save them quite a few dollars since the cost can be fairly high to get an oil change or do minor things to your vehicle at a car repair shop,” said Cuvellier. “For Soldiers, it’s a great program. The second reason it’s good is that it gives us an opportunity to reinvest that money back into our MWR programs and have our civilian professionals teach those classes to our Soldiers. It benefits the Soldier, and it benefits the community.”

“The idea is to provide our young Soldiers with the skills that they can use while they’re in the Army, and also when they leave the Army,” said Zeljko Stjepanovic, BOSS adviser and recreation specialist with USAG Ansbach DFWMR. “How is that going to affect the readiness? Well, they’re going to learn how to repair their cars. First, they’re doing something very productive. They’re learning new skills. It’s good for their development. They’re saving money, and they’ll have a safe car. That all goes back into Army readiness.”

“Palencia and Zeljko have done a great job putting this together,” said Cuvellier. “We got pretty good attendance at this one, so hopefully we can continue that.”

Palencia said Ansbach BOSS has projected about four more courses — getting certified as a ski or snowboard instructor, cooking, bicycle maintenance, and matting and framing. One course he wants to offer, but he has yet to lock in, is life-guarding.

Stjepanovic and Palencia both said they look forward to hosting even more Life Skills courses, but the question of what they offer next is up to the Soldiers benefiting from the courses.

“The BOSS president and the BOSS adviser can do all this planning, but if we don’t get Soldiers’ buy-in, it’s not going to go anywhere,” said Stjepanovic. “So, we want to reach out to as many Soldiers as possible and get their opinions on what they would like to do. Then we can set it up.”

“It’s really about what the Soldiers want to do,” he said. “I can come up with ideas, but it’s been a long time since I was a specialist and a single Soldier.” 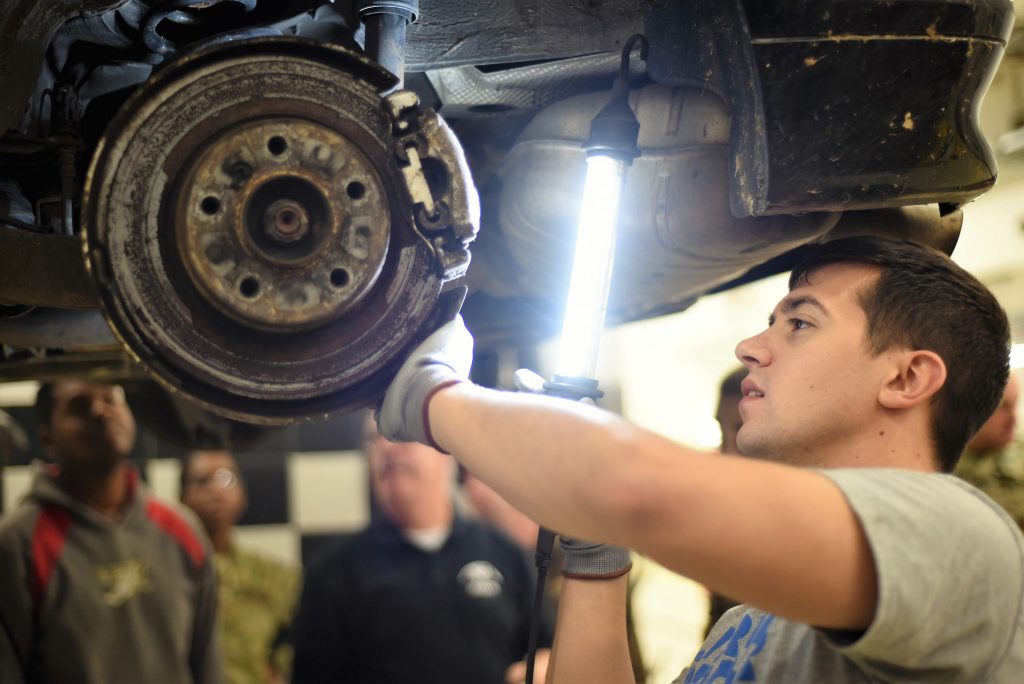 As part of a hands-on automotive course, Spc. John Boemisch of Headquarters and Headquarters Company, 12th Combat Aviation Brigade, inspects a car’s brakes Oct. 26, 2016, at the U.S. Army Garrison Ansbach Automotive Skills Center in Ansbach, Germany. The course, which was organized through USAG Ansbach’s Better Opportunities for Single Soldiers and the Directorate of Family and Morale, Welfare and Recreation, is part of the Department of the Army-funded BOSS Life Skills Program. (U.S. Army photo by Stephen Baack, USAG Ansbach Public Affairs)

Are you a single Soldier who would like to participate in or who has an idea for the BOSS Life Skills Program? Call USAG Ansbach BOSS at 09802-83-2921 or DSN 467-2921, or visit http://ansbach.armymwr.com/europe/ansbach/programs/better-opportunities-single-soldiers-boss.

See more photos of this course by checking out the Flickr album.