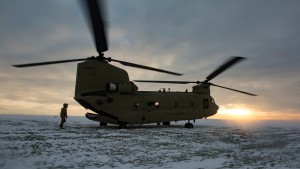 Spc. Raymond Rader, a CH-47 Helicopter repair technician, returns to his CH-47 Chinook after rigging and inspecting a payload prior to the sling load training at Katterbach Army Airfield, Jan. 20.

Aircrews practice flying in conditions of low visibility caused by “whiteout” in areas with loose snow. The crews lower risk for future missions by conducting multiple training iterations in the snowy environment, and they practice performing all of their tactical missions in the “whiteout” conditions, including sling-load operations.

To read the story as it appears on the Army News Service, visit www.army.mil/article/161227.

For a video of the training, visit www.youtube.com/watch?v=gNx_TJ-fMa8.