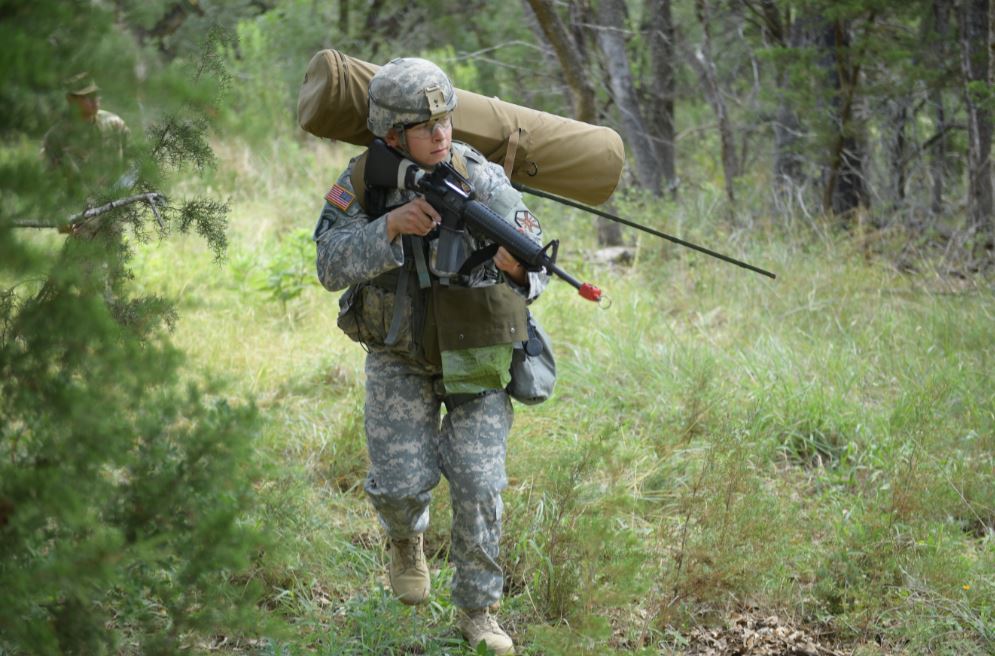 After three days and nights of Best Warrior Competition in the Texas summer heat of Camp Bullis, followed by a Command Sergeants Major Board at Fort Sam Houston, the winners were announced during an awards ceremony June 15 at the Fort Sam Houston Theatre.

Lewis, 20, of Fort Riley, Kansas, attacked the obstacle course like a wily veteran en route to the 2017 IMCOM Soldier of the Year title.

Defending champion Hagens’ goal was to finish in 2 hours and 40 minutes.

“I got three hours and 50 minutes of sleep and I know I was the first one to go to sleep because the lights were still on and everyone else was still packing rucks,” Hagens said. “That helped me on the fatigue factor, because ever since Sunday, it’s been go, go, go.”

Nobody, however, went with Hagens, who reached the six-mile turnaround point in 1 hour, 20 minutes. During the second half, he walked alone through the darkness and into daylight to finish in 2:43.

Hagens chalked up missing his desired 12-mark by three minutes as energy saved for the next event: range qualification for the M16 rifle and 9-millimeter pistol.

“I think that’s the key for me in these events,” Hagens said. “I’m not a fast sprinter and I’m not amazing at anything, but I’m consistent at everything.”

“It was definitely an experience — every aspect of it: not getting a lot of sleep; being tired from the previous events, it was very strenuous,” Lanning said. “I’m typically very good at ruck marches, but this one was pretty rough.”

The Best Warrior Competition recognizes Soldiers who demonstrate commitment to the Army values, embody the Warrior Ethos, and represent the force of the future.

Competitors agreed that their week spent in the woods, which included tent living and going without showers for three days, sharpened their Soldier skills and boosted self-confidence — a learning process that makes both them and the Army winners in the long run.

“I’m trying to be the best person possible — for the Army’s sake and for my sake,” Lewis said. “Going forward, it helps me not only to learn more about the Army, since I’ve only been in for two years, but it also helps me learn more about myself and what I can put myself through.”

Johnson said she came across things previously unseen during land navigation, which was first conducted at night, and again the following day.

“I ran into a lot of wild animals,” said Johnson, 25. “I saw a boar and a snake. It was curled up so it wasn’t too big, but I almost stepped on it. I was walking down the road to one of my points when I saw the boar, so I just stopped and waited until it went on down the road. At night, you don’t know what’s out here in the woods — all you do is hear different noises. With day land nav, at least you can see what’s going on.”

The top two finishers at Camp Bullis in July will advance to the Army Best Warrior Competition in Virginia in early October to determine the U.S. Army’s Soldier of the Year and NCO of the Year.