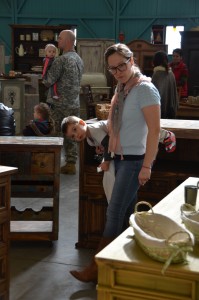 ANSBACH, Germany (March 4, 2016) – The Ansbach Spouses’ and Civilians’ Club and USAG Ansbach Family and Morale, Welfare and Recreation held the grand opening for the Near and Far Spring Bazaar today at noon at Katterbach Kaserne Hangar 2.

The bazaar, which takes place today, Saturday, and Sunday, features the goods and crafts of both on-post vendors and the crafts and goods of international vendors. 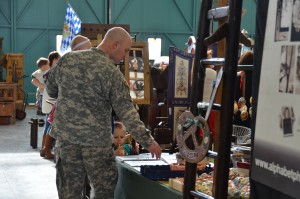 Sgt. Luke Park carries his daughter Laurel while he and daughter Lydia look at prices at the bazaar.

Col. Christopher M. Benson, U.S. Army Garrison Ansbach commander, spoke at the grand opening of the event, and thanked the members of the Ansbach Spouses’ and Civilians’ Club, whose volunteer work was critical for the bazaar to take place.

“For a bazaar to happen, it takes the time, hard work and dedication from many, many people to plan, set up and break down such a fantastic event,” said Benson. “It takes an entire community to put together an event like this — from the individual volunteers to the 10 private organizations and family readiness groups who are out here raising funds and serving Families and Soldiers.”

Alexa Mattil, ASCC president, helped organize the event, which, she said, was the club’s largest single fundraiser of the year. 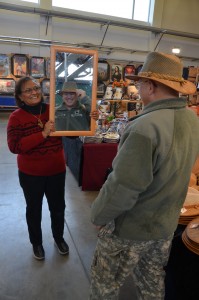 Chaplain (Lt. Col.) Jerzy Rzasowski checks out how he looks in hat while visiting the bazaar.

“It takes the whole community to put on an event of this size,” said Mattil. “People get the opportunity to assist and volunteer, but also it benefits the community financially.”

During remarks at the grand opening, Mattil said the event was “for the community, by the community.” Mattil credited the success of the bazaar to the collaboration between organizations.

“There are so many organizations and agencies that assist us as we do our best effort to put on the best bazaar that we can have for our community,” said Mattil. 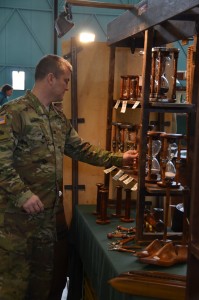 Local vendors, including many family readiness groups, sold food and homemade crafts, including custom signs and decorations, knitted goods, and more. Furthermore, Family Readiness Groups have food booths set up at the bazaar as well.

Concurrent with the Near and Far Spring Bazaar is the Installation Management Command – Europe Basketball Championship tournament, taking place at the Katterbach Fitness Center – a short walking distance along the boardwalk from Hangar 2 – Friday through Sunday. To learn more about the tournament, visit the link here.

To learn more about the Ansbach Spouses’ and Civilians’ Club, visit the link here.

To see more photos of the event, visit the Flickr photo album here.