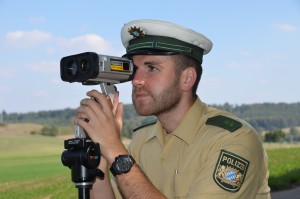 German Police Officer Steffen Schäfer focuses the stationary speed camera onto a lane on B-13, north of Ansbach during a concerted effort to reduce fatalities.
(U.S. Army Photo by Andy Gracklauer)

This is a concerted effort “to reduce fatalities by monitoring the conduct of drivers on the northern route of Highway 13, using every available means possible,” said Heinz Prießmann, director of the Ansbach Police Department.

“Our patrols will work in conjunction with our Host Nation counterparts as part of our ongoing efforts to instill safe driving behavior within our military community,” Goodenow said.

Prießmann pointed out that fatal accidents are often caused by high speeds, exceeding the authorized speed limits of 100 kilometers per hour and by risky passing of trucks or other vehicles.

“Oftentimes, drivers do not realize that even when passing another vehicle, they have to do so within the legal speed limits of 100 kph,” said Ludwig Hasenmüller, police chief inspector in Ansbach.

“The speed limit is exceeded rather quickly, when a slower vehicle going 80 or 90 kph is being passed; erroneous judgement of the distance of an oncoming vehicle unfortunately contribute to most fatal crashes,” Prießmann said.

The additional roadside check began Monday, tallying more than 30 drivers being pulled over for driving misconduct, during the morning hours.

“Our law enforcement officers addressed the misconduct; they talked to and warned drivers. Some drivers can expect fines. Not only for conducting risky passing maneuvers but also for exceeding the legal speed limit while doing so,” Hasenmüller added.

According to Prießmann, several police enforcement units and officers from regional police departments within the Ansbach and Neustadt a.d. Aisch area will continue to be involved in the roadside monitoring, with technical equipment like radar and laser guns. In particular along the northern part of B-13.