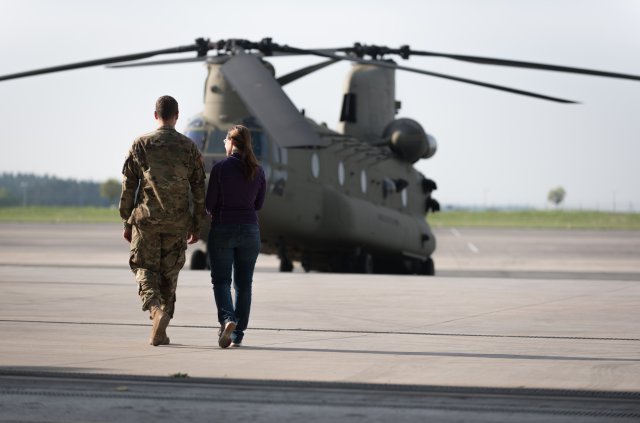 Sgt. Ryan Skinner, an AH-64 Apache Mechanic and his wife Marie Skinner, leave the hangar for a tour of a CH-47 Chinook helicopter prior to her flight aboard the aircraft.

The 20 minute flight took the Spouses over Colmberg Castle and Rothenburg o.d. Tauber which are iconic landmarks of Middle Franconia.

In accordance with Army Regulation 95-1, the Spouse Orientation Flight Program is designed to provide aviation units an opportunity to enhance military spouses’ understanding of army aviation.

For most, it was a once in a lifetime opportunity to see the aircraft up close and experience them in flight.

“It’s one thing to imagine what your spouse does as a pilot or crew chief,” said Emily Leathead, Family Readiness Group leader and spouse of Capt. Phil Leathead, a CH-47 Chinook pilot and commander of Hotel Company 1st Bn., 214th Avn. Regt.. “But to experience a flight firsthand is an unreal experience.”

“I’m so proud of what they do as aviators,” said Leathead. “I wanted to shake everyone’s hand after the flight.”

The Spouses sat through a thorough safety brief from the battalion safety officer on emergency procedures and conducted static cold load training where they were taught how to use the aircraft’s restraint system, and how to safely enter and exit.

“I am grateful to those who were able to set up this wonderful opportunity for all us Spouses,” said Amanda Geiger, wife of Spc. Chase Geiger a CH-47 Chinook helicopter repairer from H Co., 1st Bn., 214th Avn. Regt. “It was amazing to see some of what my husband gets to experience everyday.”

To read this story as it appears on the Army News Service, visit www.army.mil/article/167740.