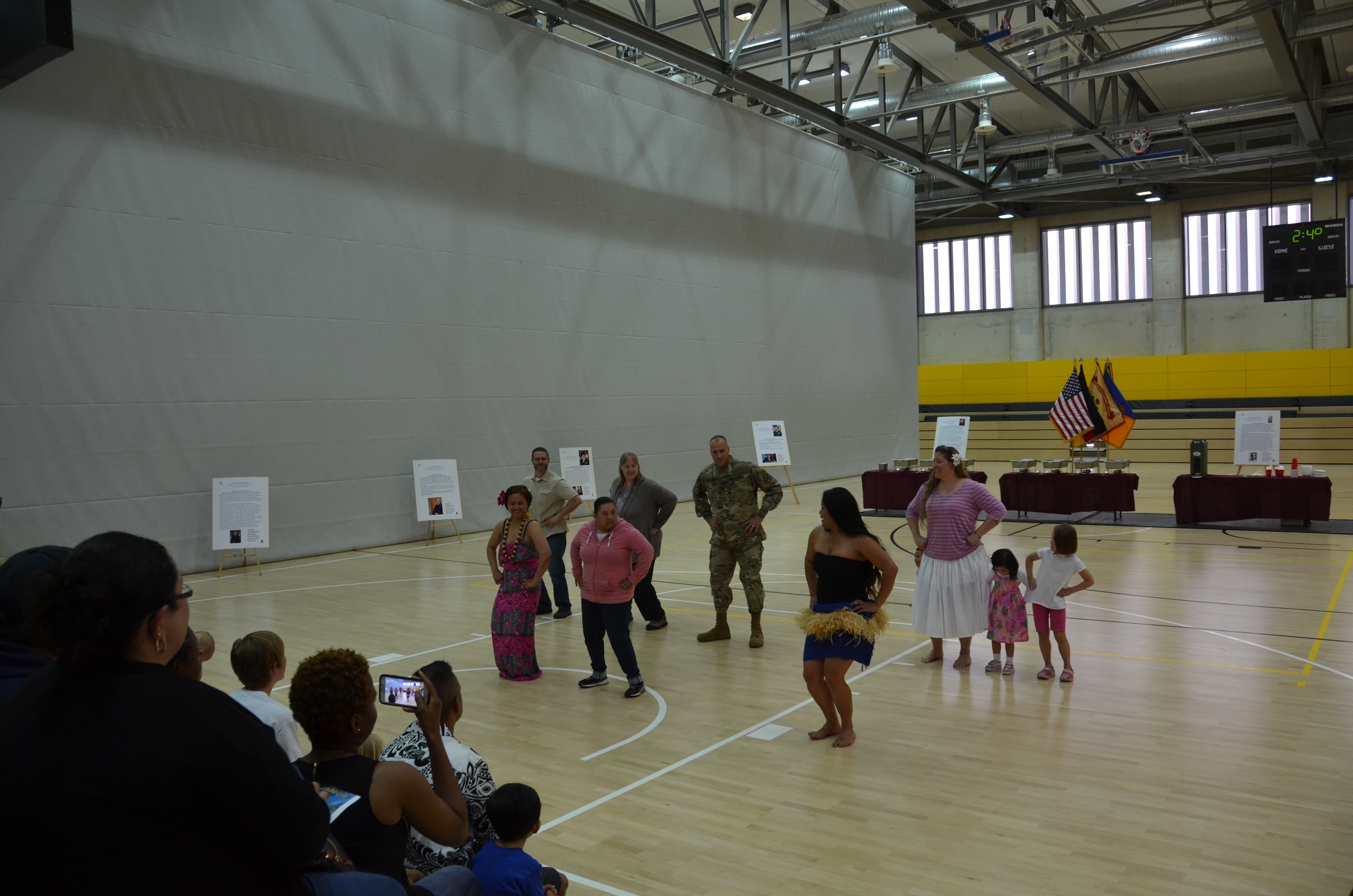 The Equal Opportunity advisers of USAG Ansbach and 12th CAB hosted the event, inviting community members to watch – and take part in – traditional Pacific Island dances, to enjoy a variety of different foods representing a diverse and geographically widespread group of cultures, and to learn a few things about the heritage and history of several cultures who have played an integral part in the history of the U.S. and of the U.S. Army.

“Native cuisine and traditional dances and music, while not wholly representative of one’s culture, serve to illuminate and symbolize it,” said Command Sgt. Maj. Derek R. Cuvellier, who spoke at the opening of the event. “I hope today’s program opens a door for all of you to a rich history and heritage that is difficult to convey in its entirety – at least in the short time we have here today. I also encourage you to take that extra step and think about the meaning behind Asian-American and Pacific Islander Heritage Month and what this diverse group has contributed to the Army, and to our country.” 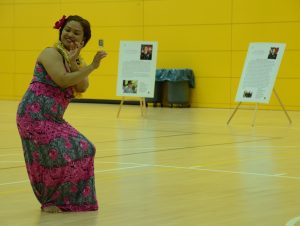 “We love sharing the culture,” said Cristina. “I’ve been doing this in Hohenfels and coming here for five years. It’s just a matter of getting everybody together and sharing the Asian, Pacific Islander culture.”

Cristina began the entertainment portion of the event with a quick-paced Tahitian dance.

“When we perform, it’s actually normal for people to shout,” said Karen. “It’s a very loud event. It’s not a quiet event usually. So we highly encourage people to scream for the females or the males performing. Especially for Tahitian numbers, the faster numbers like this one, because it energizes the performers. It makes you shake your butt harder – be more confident.”

The two sisters danced one after the other. The entertainment portion culminated in the two instructing audience participants – including Cuvellier – on how to perform a “fruit salad” dance. The dance was called a fruit salad because a different hip movement would be indicated by Cristina by calling out one of four fruits, and Karen would demonstrate the move with the participants.

In addition to the entertainment portion of the evening, the event also had an educational component. Surrounding the dance floor were several easels displaying on placards biographies and accomplishments of several Asian-Americans and Pacific Islanders to American and American military history.

Included in these biographies was Brig. Gen. Viet Xuan Luong, the first Vietnamese-born general flag officer in U.S. military history. Luong’s Family immigrated to the U.S. as political refugees in 1975 toward the end of the Vietnam War. Luong achieved the rank of brigadier general after 25 years in the military during a 2014 ceremony at Fort Hood, Texas.

Another distinguished person featured biographically at the event was Brig. Gen. Miyako N. Schanely, the second Japanese-American woman in the Armed Forces and the first female Japanese-American reserve engineer to be promoted to the rank of general flag officer. 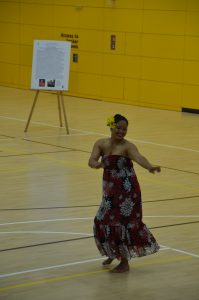 Cristina Salvador, a volunteer from Hohenfels, performs a traditional Pacific Island dance. Cristina and her sister Karen have performed at previous Asian-American Pacific Island Hertiage Month observances at USAG Ansbach and other garrisons.

Before the dance performances as well as after, audience members had a chance to read the biographies of the distinguished individuals.

Aaron Michael Palencia, the president of Better Opportunities for Single Soldiers at USAG Ansbach, volunteered at the event. Parra contacted Palencia, who agreed to do it because he “just liked volunteering,” according to Palencia. But there was more to it.

“I’m an islander as well, so to me it was more a commitment,” said Palencia. “I’m an American first and then a Filipino.”

Palencia recommended learning more not only about the cultures represented at the event but to gain an understanding of their own cultures.

“All Soldiers should know their roots,” he said. “Everyone should have pride for their heritage. Learn more about it.”

Delayna and Anthony Montecino attended the event with their children.

“We were able to meet up with some friends,” said Delayna. “We had lived in Hawaii before here, so it was like being home again.”

“It was very moving – the music and the artistic style of the dance,” said Anthony.

To read the story as it appears on the Army News Service, visit www.army.mil/article/168082.