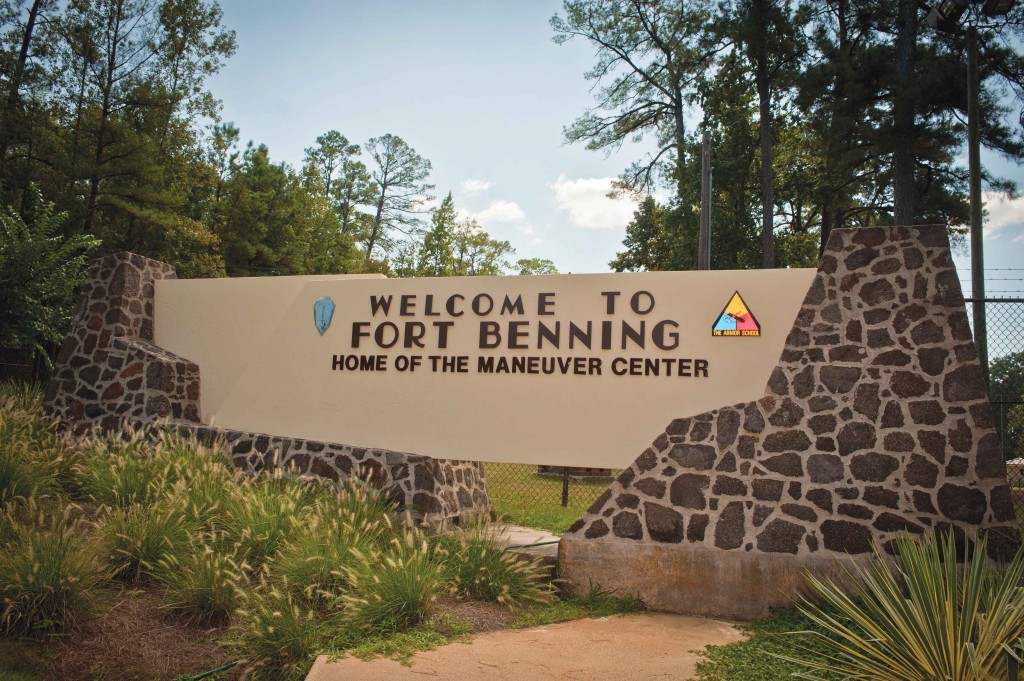 The “Stone Gate” on Benning Road, Fort Benning, Georgia. The Army announced July 9, 2015 that by the end of fiscal year 2018, the active Army expects to have drawn down in size from 490,000 to 450,000. Army officials also said the service will shrink the size of several brigade combat teams and will cut 17,000 civilian employees. At Fort Benning Georgia, the 3rd Brigade Combat Team, 3rd Infantry Division, will convert to a maneuver battalion task force by fiscal 2017. (U.S. Army photo by John D. Helms)

WASHINGTON (Army News Service, July 9, 2015) — By the end of fiscal 2018, the active Army expects to have drawn down in size from 490,000 to 450,000, said Army officials during a July 9 press conference at the Pentagon. The service will also shrink the size of several brigade combat teams and will cut 17,000 civilian employees.

“These are incredibly difficult choices,” said Brig. Gen. Randy George, director of force management for the Army. “The Army followed a long and deliberate process that included utilization of a [Government Accountability Office]-endorsed military value analysis process, and an inclusive total Army analysis, in order to determine the best construct for the Army, based on the threats we face and the current fiscal environment we must operate in.”

During the press conference, the Army provided a list of 30 installations — including those six — where changes would be made. Communities outside those installations will regrettably be affected, by the changes, George said, but “the Army has to operate within the budget provided. Part of doing that is restructuring and reorganizing to be able to accomplish the Army’s mission in the best manner possible.”

Cuts to the force will come from reductions of headquarters — focusing on two-star and above headquarters; the reduction of brigade combat teams; the Aviation Restructure Initiative; operational force design changes; and reduction to enabler and generating forces.

George said that the Army will try to draw down the active force end strength gradually in order to “minimize the turbulence we have with Soldiers and their Families.”

Much of the initial 80,000-Soldier reduction was achieved by elimination of temporary end-strength increases, wartime allowance and reductions in Europe.

With the latest reductions, the Army will try to use attrition as well, George said, and the slope of the drawdown will help with that. But with this drawdown, not all Soldier cuts will be able to come through attrition. Instead, the Army will need to continue officer and enlisted involuntary separations to meet the end-strength target of 450,000 Soldiers. There will also be early retirement boards. “We do except that that will happen.”

Among civilians, there will be a 17,000-person reduction in fiscal years 2016 and 2017. The Army has said that these reductions can be achieved through attrition and by not filling currently unfilled positions. The Army has already cut the civilian workforce by 8,000. The additional 17,000 cuts will mean a total loss of 25,000 Army civilians by FY17.

Three of the affected Army installations will see changes to some of their largest operational units, called brigade combat teams, which typically involve about 4,000 Soldiers.

At Fort Benning, the 3rd Brigade Combat Team, or BCT, 3rd Infantry Division, will convert to a maneuver battalion task force by FY17. A maneuver battalion task force includes about 1,050 Soldiers rather than the 4,000 in a full BCT. The change at Fort Benning means it no longer needs to expand its training area. The change will also reduce the competition on Fort Benning for ranges and training areas that exist now between the 3rd BCT, the Armor and the Infantry School. About 3,402 Soldiers will be cut at Fort Benning.

The Army has said that Fort Benning scored in the bottom third of a Military Value Assessment, or MVA, which is largely related to the quality and availability of its training spaces.

The Army also said that despite the temporary nature commonly associated with “task forces,” a maneuver battalion task force is actually a permanent part of Army force structure. Such task forces offer commanders the option to grow rapidly to create a BCT, if needed. The task force allows the Army to maintain some combat power capability and also allows “reversibility” within a force size of 450,000 Soldiers — versus completely eliminating a BCT.

In January, Chief of Staff of the Army Gen. Ray Odierno had said the Army would achieve the 450,000 end strength though the elimination of four BCTs. This is no longer the plan. Instead, the Army will convert some BCTs to maneuver battalion task forces, as it will in Georgia.

At Joint Base Elmendorf-Richardson, or JBER, the Army will also convert the 4th Infantry Brigade Combat Team (Airborne), 25th Infantry Division, to a maneuver battalion task force by FY17. The unit will continue to support the U.S. Army Pacific Command rapid reaction capability with an airborne capability. The reduction will also reduce training complications at JBER, which also scored in the bottom third of the MVA — due primarily to availability of quality training ranges. About 2,631 Soldiers will be cut from Alaska.

In Hawaii, the 2nd Brigade Combat Team, 25th Infantry Division, at Schofield Barracks, will convert from a Stryker BCT to a two-maneuver-battalion infantry brigade combat team.

The conversion in Hawaii maximizes collective training for both BCTs there which can now train with existing units from the 3rd BCT. Additionally, the change streamlines logistics support, and reduces costs associated with training at a training centers, because the unit will no longer need to ship Stryker vehicles. Schofield Barracks, like JBER and Fort Benning, ranked in the bottom third of the MVA as well.

The Strykers from 2-25 are expected to move to support the Army National Guard’s, or ARNG, 81st Armored Brigade Combat Team, 40th Infantry Division, in Washington, Oregon, and California. The equipment from that heavy unit will move to the active Army to establish pre-positioned stock in Europe in order to bolster the ongoing commitment to the European Reassurance Initiative.

Officials expect it could take two years to establish the pre-positioned stocks — about one year for the ARNG to divest its heavy equipment, and one year to reset the gear and get it in place in Europe.

Additional changes involve the 3rd Expeditionary Sustainment Command relocating from Fort Knox, Kentucky to Fort Bragg, North Carolina, no later than the end of the year. The 3rd ESC would then be able to co-locate with its corps headquarters, the XVIII Airborne Corps.

Additionally, the 1st Theater Sustainment Command will relocate from Fort Bragg to Fort Knox. According to the Army, there are adequate facilities on both Fort Knox and Fort Bragg to support the moves, without the need for additional construction.

When determining which cuts to make, and where, the Army conducted environmental and socioeconomic analysis of reductions at the Army’s 30 largest installations. Additionally, the Army received more than 111,000 public comments on the force structure changes. The Army also conducted “community listening” sessions at those 30 installations to receive input from residents and civic leaders. More than 22,000 attended the listening sessions to provide input.

If sequestration continues, the Army is expected to shrink further to about 420,000 Soldiers — a loss of an additional 30,000 Soldiers. George said that would happen after the recently-announced cuts were completed, so they would begin sometime in 2019.

Citing earlier comments by the chief of staff of the Army, George said that cuts below 450,000 Soldiers “would be significant risk” for the Army, in terms of meeting current combatant commander requirements and also “being ready for the unknowns.”

“Certainly it’s about choices, about where you apply forces and what you want those forces to do,” George said.

The Army is able to now, and has been able in the past, to respond to a variety of scenarios, and multiple scenarios, at the same time. An end strength of 420,000 will mean this is no longer possible.

“The resulting force would be incapable of simultaneously meeting current deployment requirements and responding to the overseas contingency requirements of the combatant commanders,” George said.

Were sequestration to continue unabated, the total Army end strength will drop by an additional 60,000 Soldiers. The Total Army would then stand at 420,000 active-duty Soldiers, 315,000 Army National Guard Soldiers, and 185,000 Army Reserve Soldiers.

To read the story as it appears at Army News Service, visit www.army.mil/article/151992.