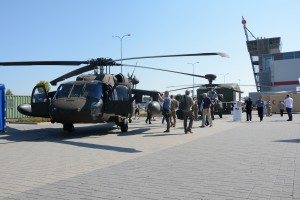 Polish citizens get a first-hand look at a UH-60 Black Hawk from 4-3 CAB and at an AH-64 Apache from 12th CAB during the Polish Armed Forces’ Exhibition of Equipment and Armaments at the Targi Kielce Exabition and Congress Center, Sept. 2, 2015. (U.S. Army photo by Capt. Jaymon Bell /released)

This event was an opportunity for Soldiers in the 12th CAB to interact with the Polish public and members of the military by explaining how their helicopters and aviation personnel operate.

“I’ve seen the AH-64 on television and in the movies before but never in person,” said Lieutenant Grezegorz Banaszek of the 7th Aviation Squadron, 25th Air Calvary Brigade. “I can’t believe I’m sitting in the cockpit now.”

This was the second static display for the 12th CAB in Poland. Two AH-64 Apaches also participated in the Polish Armed Forces Day parade Aug. 15, 2015 in Warsaw, Poland.

“This is my first exposure to the Polish military,” said Chief Warrant Officer 2 Andrew Maney from 2nd Battalion, 159th Attack Reconnaissance Aviation Regiment, 12th CAB. “I was impressed by their eagerness to partner with American forces and desire to improve interoperability between our forces.”

The 12th CAB is currently conducting training missions throughout Europe in support of Operation Atlantic Resolve.

Atlantic Resolve is an ongoing multinational partnership focused on combined training and security cooperation between NATO allies and is intended to improve combined operational capability in a range of missions and ensure the continued peace and stability for a strong Europe.

To read the story as it appears on the Army News Service, visit www.army.mil/article/155070.