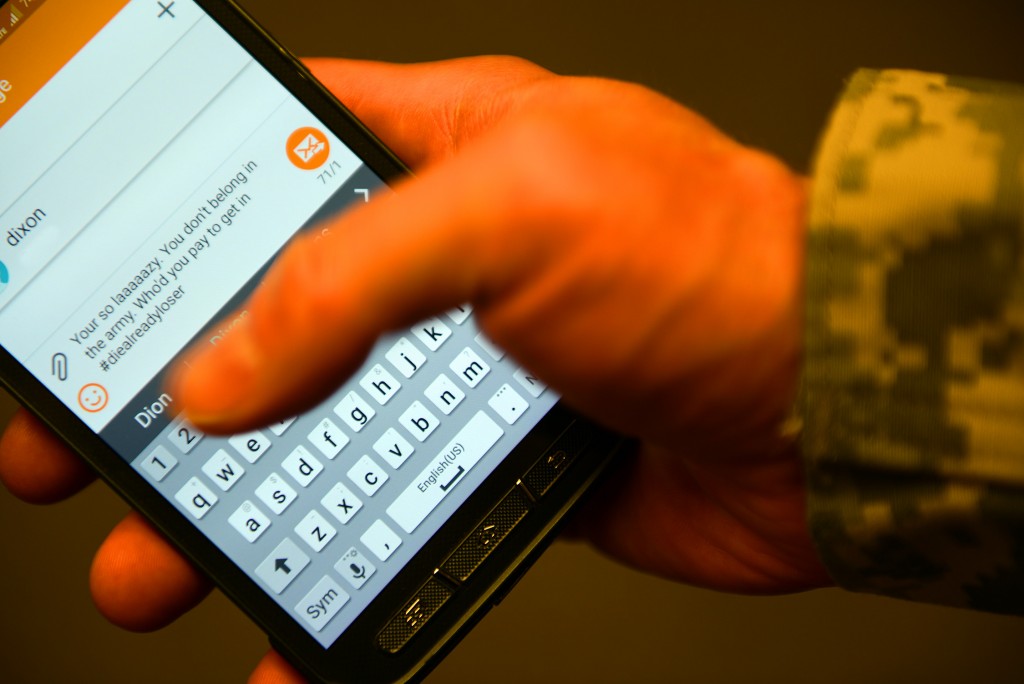 “How do we ensure Army values-based conduct to prevent and respond to harm inflicted through the use of electronic communication?” Army Chief of Staff Gen. Ray Odierno asked for an answer to that question earlier this year – in the wake of revelations at the February 2015 SHARP Summit in Washington D.C. (U.S. Army photo by C. Todd Lopez)

WASHINGTON (Army News Service, July 7, 2015) – “How do we ensure Army values-based conduct to prevent and respond to harm inflicted through the use of electronic communication?”

Army Chief of Staff Gen. Ray Odierno asked for an answer to that question earlier this year – in the wake of revelations at the February 2015 SHARP Summit in Washington D.C.

At the SHARP summit, Soldiers spoke about online sexual harassment via social media. They had also discussed retribution, delivered online, against Soldiers, who had spoken up about both sexual harassment and sexual assault.

In March, following the SHARP summit, Odierno directed the creation of a “tiger team” at headquarters Army level to address the issue, and to answer his question about how to prevent and respond to such behavior online.

“I expect Soldiers to uphold our Army values, on and off duty, and treat each other with dignity and respect,” the general wrote earlier this month on his own social media page. “This applies to our day-to-day interactions, at the office, in the field, on deployment, and at home, both in person and across social media.”

Odierno explained on his Facebook page that he is concerned with online bullying, cyber-stalking, and online retaliation for reporting misdeeds.

“This behavior is unprofessional and should not be acceptable to any of us,” he wrote. “Join with me to turn the tide; let’s work together to protect each other and tackle these issues to retain a culture of professionalism; both off and online.”

As it turns out, the answer to Odierno’s question didn’t take as much work as it might have. The team uncovered a weapon to combat the problem that is already in the Army’s inventory: Army Regulation 600-20.

The policy states that the Army is a values-based organization, where everyone is expected to do what is right by treating all persons as they should be treated – with dignity and respect. Hazing, bullying, and other behaviors that undermine dignity and respect are fundamentally in opposition to Army values and are prohibited. The section defines both hazing and bullying. Mistreatment of others, it reads, does not have to be limited to in-person behavior. It can happen online as well.

When commanders find their Soldiers are engaging in behavior that is contrary to the Army values of treating others with dignity and respect, and that behavior is happening online – commanders have a tool available to them already to remedy the situation.

“Being that this is a punitive policy, by working with their supporting legal advisor, commanders will be able to determine the most appropriate way to take action,” Emerson said.

Army Regulation 600-20 specifically addresses the use of “electronic media,” not “electronic communications.” AR 600-20 currently addresses “other misconduct,” and may more specifically describe other misconduct in the future. “Retaliation” and “reprisal” against Soldiers, who have reported the offenses and misconducts of others, is already addressed in other Army directives and policy. These issues will be readdressed in an update to AR 600-20, likely by the end of the year, Emerson said.

The tiger team Emerson serves on has outlined three lines of effort to achieve their goal of curbing non-professional behavior by Soldiers online. Those lines of effort were released to the Army, June 16, as part of an implementation plan called “Professionalization of Online Conduct.”

The first is to update existing policy and regulations to reflect more accurately the social media landscape. They also will develop a report for senior Army leadership on online-related incidents. The report will collate incident information from Army staff offices.

The team also has a line of effort related to training, to “provide commanders and leaders the information and tools they need to educate others and respond appropriately to complaints; train current and future Soldiers, Army civilians, and contractors on how to protect themselves, identify and prevent inappropriate behavior and report online-related incidents.”

Finally, the Army public affairs community is tasked with ensuring the Army community is aware of what online misconduct looks like, the training resources that are available, and the policy changes that are going to be made.

According to the current AR 600-20, “bullying” includes, but is not limited to, “making threats, spreading rumors, social isolation, and attacking someone physically, verbally, or through the use of electronic media.” Similarly, hazing “need not be committed in the physical presence of the victim; it may be accomplished through written or phone messages, text messages, email, social media, or any other virtual or electronic medium.”

Online conduct should reflect the tenets of the Army profession. There is no difference in standards between in-person behavior and online conduct, the regulation says.

During a “town hall” meeting with Soldiers, June 4, Sgt. Maj. of the Army Daniel A. Dailey wanted to know why Soldiers are willing to engage in such behavior online, and to use online forums to express opinions and say things that they would never be willing to say in public.

“Why is it that Soldiers get so brave behind the keyboard,” he asked. “If you go on social media today, it feels like people have this Spartan shield when they get behind their computer. They say things that they will not say, as Soldiers, in public.”

Emerson said one reason Soldiers are willing to write things online that they wouldn’t say in person, is because they believe, incorrectly, that they have an “online persona” that is distinct from their real-world persona – and is therefore not subject to military discipline.

“As members of the Army profession, Soldiers and civilians, we have one persona,” she said. “We are professionals. And so our online conduct, whether we are at work, at home, in a café, in a library – should be consistent with the Army ethic and Army standards of conduct.”

Mistreatment of persons, both in person and online, is destructive to the unit cohesion that is required for the Army to conduct its mission. In short, it destroys the Army whether it happens in the unit, out in public, or online, Emerson said.

“People join an organization because organizations have specific values and cultures they want to be a part of,” Emerson said. “The Army has expectations of good behavior – right behavior. Not just because it’s nice or we want people to be happy. It’s because it’s a mission imperative. When we go places to do things, fighting forest fires in Montana, or going to a foreign country as an extension of national power … we have to do that as a team.

“To be successful, that requires unit cohesion, with a positive command climate. We serve in battle and fight in the foxhole, not just for apple pie and the red, white and blue – but for the person next to us in the foxhole. When the bullets are flying, that is who we are taking care of. And we expect the same thing from him or her. We can only do that if we are mutually supporting and close-knit.”

Army Regulation 600-20 doesn’t just address what constitutes bullying or hazing or harassment – and it doesn’t simply tell Soldiers what they should not be doing. It also spells out what Soldiers should be doing: it obligates Soldiers to report activities that are out of line with Army values.

“Individuals are responsible for … advising the command of any incidents of hazing or bullying … conducting themselves in accordance with this paragraph and treating all persons as they should be treated – with dignity and respect,” the regulation reads. “Service members should report hazing or bullying to their commander, law enforcement, or the inspector general.”

“Leadership fixes things,” said Dailey, during an enlisted solarium in May.

“When I was a squad leader, I had nine Soldiers,” he said. “I promise you that if I looked those Soldiers in the face and said don’t do this – they wouldn’t. And I didn’t need to say anything else. And if they did and they knew that they’d get caught and if they knew they were not representing that squad to the best of their ability – I’m telling you they knew what the consequences would be. And they knew that they didn’t want to embarrass me or let the Army down.”

The quickest fix for the kinds of activities Soldiers are involved in today online, Dailey said, is leadership influence – especially first-line leaders. He said he is surprised that first-line leaders today don’t have that level of control over their units – at least not in regard to online behavior.

“I can’t grasp the concept that our young squad leaders don’t have that level of influence over their Soldiers,” he said. “I think they do, I just think they are not telling them. I think if every squad leader in the Army sat their Soldiers down around the oak tree and said this is what you should or should not be doing, it would get taken care of. I think we are not doing it.”

Emerson said the Army is not looking to “police” the Internet. Instead, she said, the Army is making a statement, to let Soldiers know that online is the same as offline back in the unit. Online is, like offline, a domain where professional Soldier behavior is expected of everyone.

“The online environment will continue to grow and morph over time,” Emerson said. “We will have to continually seize the initiative and take, retake ground or at least define what ‘right’ looks like for us. We’re making a statement here. We are defining what right looks like. We’re defining online conduct, and that it should be in concert with our Army ethic, our Army profession. Leaders, at all levels, set the example for others to follow.”

Emerson said the Army’s intent is quite the opposite of asking Soldiers to stop using social media. The Army values social media, she said, and wants Soldiers to go online and tell their stories about serving their nation.

“All of us have an Army task, an implied task, to tell the Army story,” she said. “We are probably the Army’s best recruiters. What can we do to tell the Army story online? We can write about how we help others and how we provide service to the nation on a day-to-day basis. There are a lot of positive things we can put on social media.

“Telling mom and dad and grandma and grandpa, sharing the photos, all of that is very important. That happens countless times in social media and in other ways. We learn things from blogs. So in no way, shape or form, are we trying to limit the sharing of the Army story. It is not our intention to get people off the Internet. We need that interaction. We need to continue to modernize and adapt to the environment we are in. So we intend to stay in the media, the social media, and utilize those things in an appropriate manner.”

To read this story as it appears on the Army News Service, visit www.army.mil/article/150887.