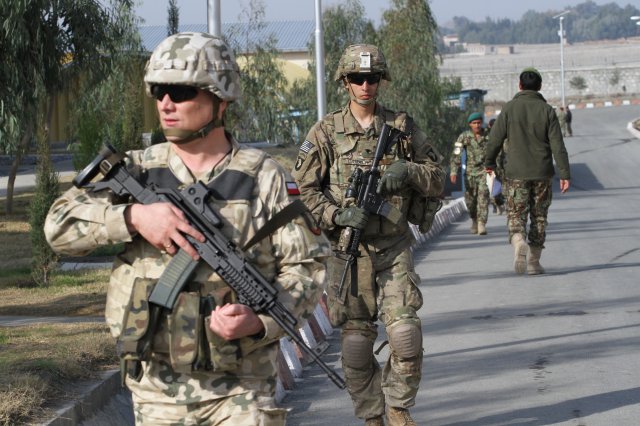 The Overseas Contingency Operations fiscal year 2016 personnel appropriation for the Army is about $1.8 billion. That’s about $1.4 billion less than what was appropriated last year. Or to put it another way, last year’s funding was almost double. Shown here, a Soldier from 3rd Brigade Combat Team “Rakkasans,” 101st Airborne Division (Air Assault), along with a service member from the Polish armed forces, provide a security escort during an advising mission at Tactical Base Gamberi in Afghanistan in February 2015.

FORT MEADE, Md. (Dec. 23, 2015) — Both Soldiers and federal employees will receive a 1.3 percent pay raise beginning in January, funded by a consolidated Appropriations Act passed by Congress and signed by the president, Dec. 18.

Just after signing the $1.1 trillion Appropriations Act for fiscal year 2016, President Barack Obama issued an executive order to implement a 1 percent across-the-board pay raise for federal employees. This, in addition to an average .3 percent locality pay increase, will provide most Army employees with about a 1.3 percent boost to paychecks.

The civilian pay raise takes effect the first day of the first pay period beginning on or after Jan. 1, according to the executive order. This means for most Army and DOD employees – who have a two-week pay period ending Jan. 9 – the new pay rate kicks in Jan. 10.

The consolidated Appropriations Act, signed Friday, will fund the government through Sept. 30. It’s the final product of a two-part budget process that included the signing of the FY16 National Defense Authorization Act, or NDAA, Nov. 25.

The FY16 appropriations bill provides just more than $41 billion for Army personnel expenditures. That’s about $70.5 million less than what was provided by the FY15 Appropriations Act, signed into law Dec. 16, 2014.

Funding for Army Reserve personnel is up about $200 million from last year’s appropriations, though. This year almost $4.5 billion was appropriated.

Almost $7.9 billion was appropriated for Army National Guard personnel – up from about $300 million from last year.

About $23.4 billion was budgeted for operations and maintenance, or O&M. That’s about $400 million more than what was given to the Army last year for O&M.

Funding for Overseas Contingency Operations, or OCO, is drastically down, though, for FY16.

The OCO operations and maintenance appropriation for the Army this year is almost $15 billion. Last year, however, it was $18.1 billion – a decrease of more than $3.1 billion.

The OCO personnel appropriation for the Army is about $1.8 billion for this year. That’s about $1.4 billion less than what was appropriated last year. Or to put it another way, last year’s funding was almost double.

The Counterterrorism Partnership Fund for this year is $1.1 billion, about $200 million less than last year.

The Iraq Train and Equip Fund for this year is $715 million, less than half of what was appropriated to train the Iraqis in 2015.

The Afghanistan Security Forces Fund is $3.65 billion this year. Last year it was $4.1 billion.

On the plus side, though, about $7.6 billion was given to fund Army research and development, or R&D, test and evaluation this year out of regular appropriations. That’s almost $890 million more than what was appropriated last year for R&D.

Just under $5.9 billion was allocated to fund Army aircraft procurement. That’s up about $650 million from last year. Some of the funding will be used to replace A/MH-6 Enhanced Little Bird aircraft for special operations and some will be used to upgrade UH-60 Black Hawk helicopters for the National Guard, according to the NDAA.

About $1.6 billion was appropriated for the Army to procure missiles. That’s up about $392 million from last year.

Just more than $5.7 billion was appropriated to the Army for other tactical vehicles, spare parts, electronics and other procurements. That’s up about $971 million from last year and the OCO section provides almost $1.2 billion more for overseas contingency procurements through Sept. 30, 2018.