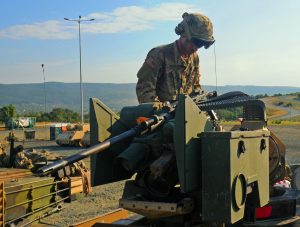 An STX is a scenario-driven, mission oriented exercise designed to train on either one collective task or a group of related tasks through practice. It involves a realistic military operation scenario, and is used for training, evaluation, and sustainment of task proficiency.

“We are going to train on force on force between each platoon, as well as defensive and offensive tactics, at both the platoon and company level,” said Sgt. Ruben Casiano, as he checked to make sure his squad’s MILES gear was working properly.

The Soldiers will spend the first half of the exercise focusing on platoon level operations, which will give them the chance to refine their standard operating procedures and tactics before moving on to company level operations.

One of the reasons the unit is able to do this type of training is because of their location in Bulgaria and the access they have been granted by the Bulgarian military to this training area.

“It’s great that we can train here,” said Capt. Samuel Herbert, company commander. “The Bulgarians have been very supportive of our efforts.”

Herbert said that normally a unit his size would only get to conduct this type of training once or twice a year.

Anvil Company, along with the rest of the battalion, have been in Eastern Europe since March in support of Operation Atlantic Resolve. During that time, the unit has participated in two multinational exercises, Operation Strike Back, in Bulgaria, and Operation Noble Partner, in Georgia, as well as numerous smaller training exercises. 1st Bn., 64th Arm. Rgmt. is scheduled to rotate back to Fort Stewart in September.

U.S. Army Europe is uniquely positioned in its 51 country area of responsibility to advance American strategic interests in Europe and Eurasia. The relationships we build during more than 1,000 theater security cooperation events in more than 40 countries each year lead directly to support for multinational contingency operations around the world, strengthen regional partnerships and enhance global security.

For more photos or to read the story as it appears through the Army News Service, visit www.army.mil/article/172081.