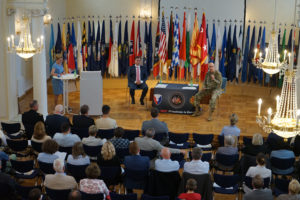 U.S. Army Garrison (USAG) Ansbach and the City of Ansbach hosted the final of three speaker series events May 13 at the Karlshalle in downtown Ansbach with a discussion on the future of the transatlantic partnership.

The panel discussion was hosted by Garrison Commander, Col. Karen Hobart, who explained, “planning for this speaker series began last year before the current events in the Ukraine. It is our hope that this important event will bring greater understanding on why the United States Army is still in Germany and how Germany and the United States partner together to secure our collective future.”

“I could not be more passionate about the importance of our transatlantic alliance in confronting Russia’s illegal war of aggression in Ukraine,” said Richter in the opening of his statement. “If Putin was looking for weakness in the resolve of the Ukrainian people to defend their country or weakness in the unity of the NATO alliance, he was sorely mistaken. Ukraine has, and continues, to fight back hard. The NATO alliance is more united than ever.

“NATO is united and determined to defend our collective security,” the colonel continued. “Together, we have reinforced NATO’s eastern flank by repositioning thousands of U.S. and Allied troops to reassure frontline Allies and deter Russia’s aggression.”

Richter expanded on how Germany is contributing to NATO in regards to the crisis in Ukraine beyond transferring of major weapon systems. “Germany has reinforced NATO’s Eastern flank by sending additional forces to the Baltics, as well as, deploying and even donating air defense assets to a multinational task force in Slovakia.”

“The U.S. Army has deployed air defense and protection assets to Lithuania, Latvia, Poland, and currently deploying to Slovakia,” said Burke. “Prior to and following the February 24 invasion of Ukraine, USAREUR-AF (U.S. Army in Europe and Africa) responded decisively to National Command Authority directives and immediately deployed troops to Slovakia, Hungary, Bulgaria, and 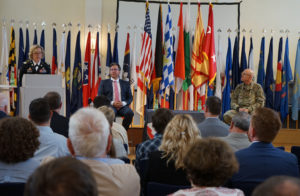 Burke highlighted the fact that the U.S. Army never intends to operate alone and will always strives to be part of a coalition capable of operating across the continuum.

“Coalitions are built on relationships – and those relationships are easier built during peacetime, prior to hostilities,” he said. “Combined training and theater security cooperation engagements with allies and partners demonstrate our shared commitment to maintaining a safe and secure Europe.

“The diversity of NATO or truly any coalition is part of its strength but we have to understand each nation’s culture, their history, their capabilities, and any limitations or caveats that might prevent them from doing certain things,” Burke added. “While NATO and each individual nation in the alliance have done much to reduce them; caveats are real…we must work within this framework focusing on the goodness of the coalition and what allies and partners can do vice what they can’t do.”

Urban focused on the commonality with the U.S. military that Germany does not want to stand alone or act alone either.

“It is an echo of the German learning experience from the 20th century which is two main ideas in German contemporary history and thinking – never again and never alone,” he said. “NATO is very important to Germany and within that structure to operate with the partners and allies.

“When we look at the current situation, in politics, you have multiple challenges at the same time and you need to take care of a 100 things then something becomes dominant like the pandemic with a brute force that was not expected,” Urban added. “In Central Europe at the end of the century, the sentiment was that there will not be another war. Recent events have shown we have an aggressor who is attacking and tried to take over an entire country which a few years ago was thought would never happen again.

Urban said that reality must be faced now and Germany is glad that NATO has remained over the years and they are partners.

“In Germany, the federal government has exclusive responsibility for military and defense policy issues. However, the presence of U.S. forces in Bavaria results in numerous ties to the stationing communities and the Free State,” he said. “Within the state government, the Bavarian State Chancellery and thus State Chancellery Minister Dr. Florian Herrmann is entrusted with the duties emerging from this. 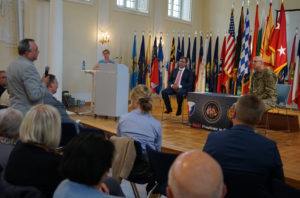 “A concrete example of this activity is the support of civil-military coordination between civilian authorities and the armed forces as well as between state and federal authorities in the case of military transports and troop deployments, such as the current one to strengthen NATO’s eastern flank,” explained Urban. “This increases the protection of the people in Bavaria, Germany and NATO as a whole, especially in a special security situation.”

Hobart closed her remarks with gratitude to the community members, “who have faithfully supported the U.S. military for many years especially now as the Ukraine crisis has put the focus on the importance of NATO and its partnerships.

“We strive daily to be good neighbors and your understanding of our mission allows us to conduct operations as directed,” she said. “Our relations remind us that “you can’t surge trust” or create alliances, relationships, and partnership after conflict emerges. It is the relations and community built over time that provides and grows the trust needed in times of conflict.”

The speaker series was the idea of Hobart. The series focused on the mission and role of the U.S. Army in Germany. Planning for the series began in 2021 before the current events in the Ukraine. The first event was held on March 29, U.S. Consul General-Munich Timothy Liston spoke about the transatlantic-partnership, where we have been and current events and the second on April 21 discussed the role of U.S. Army aviation in Germany and beyond.