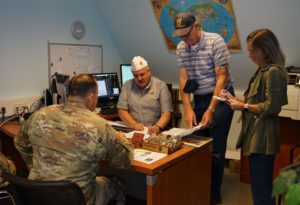 ANSBACH, Germany (Jan. 26, 2022) – Understanding their veteran benefits and how to get them is a major concern of many transitioning Soldiers and veterans living overseas.

The Ansbach Veterans Service Office (VSO) assists all who need assistance with their veterans’ benefits not only in the Ansbach area but across all of the European continent, Africa, China, and Middle East.

“We established our office over four years ago in Katterbach with great support from DHR (Directorate of Human Resources),” said Frank Phillips, Director American Legion Department of France Veterans Service Officers here in Europe. “We didn’t have a working veterans service organization office over here (Europe) for accredited officers.”

In the beginning there was only an accredited officer for the American Legion and one for the VFW (Veterans of Foreign Wars) according to Phillips. “It was just the two of us at that time and there was no support so no one knew how to get in contact with us.

“There was a rotating Veterans Affairs (VA) individual who would come from the States on a six-month rotation and visit Ansbach once a month,” he explained. “We have a lot of retirees and they couldn’t manage the paperwork without somebody to explain it and a lot of them didn’t put in claims.”

Now the office has two accredited officers, Phillips and Michael Sherman, who are located in the Welcome Center in Katterbach to assist veterans and transitioning Soldiers with direct access to the computers to do research and upload files direct to the VA. The two gentlemen are volunteers and don’t receive any pay for their work.

“The reason we needed to get this better because there was nobody (here) who could explain how the VA works or how to properly file a claim,” said Phillips. “We actually walk you through the whole process, explain what to do and how to fill out the proper forms, and we will submit the forms for you, making sure you get everything done.

“The two things we won’t do is look at all your medical records and do the claim for you,” he added.

Transitioning soldiers, either retiring or exiting service, can start the process with filing their claim 180 days from separation or retirement as well as getting their exams set up. When they are 30 days out of the military, they can start receiving their benefit checks according to Phillips.

“We help them with filling out paperwork and submitting it for them,” he said.  “We also assist retirees as well as the spouses of retirees or veterans who have passed away.

“Our office is bilingual. We speak German and English so it’s a big help to the German spouses over here,” Phillips added. “Our biggest issue is our Vietnam veterans and our older retirees who think they don’t need the money and they don’t know they are entitled.”

The VSO office said that many of the older veterans believe the myth out there that they are taking it from another veteran. “That’s not true, Congress passed a law that there is no limit to compensation that the government can give out,” he said. “Contrary to that, is more claims we have, the more services we provide to our veterans.”

According to Phillips, many Veterans put in claims and think that is all they can do. “As you get older, your arthritis may get worse or you develop tinnitus or some other conditions,” explained Phillips. “We can put in an increase and you will receive more compensation for that claim.

“You have people like me who got out in 1986 and just put my claim in 2014,” he said. “There is no time limit to claims. I say have you filed your claim and they say no. I say come and talk to me and I can take care of you.”

“I’ve been retired for 18 years and never had my VA disability relooked because it was always a distance to travel for me so for me personally it was an inconvenience instead of doing the right thing for me and my family,” said Brian Crowley, S3/5/7 director, U.S. Army Garrison Ansbach. “I was able to get an appointment with him (Phillips) pretty easily.

“His knowledge and experience as well as his ability to walk me through the process, talking through things I had never thought of in 20 plus years paid dividends,” Crowley said. “The diligence that he put into it for me increased my overall rating. If I wouldn’t have had Frank here locally, I wouldn’t have done it.”

“Once you have a claim established and a decision letter you can send a copy of that and enrollment form into the foreign medical program which will send you a letter back verifying your disability,” said Phillips. “If you incur any medical cost in Europe or outside of CONUS (continental United States) and it is service connected, they will reimburse you 100 percent.

According to Phillips, the FMP doesn’t cover anything that is not service related. It has to be service connected which means the veteran has to have a claim in. The service connection can be zero percent. For example, if the veteran has a hearing loss of zero percent, they can receive a prescription for hearing aids free because it was listed in their decision letter.