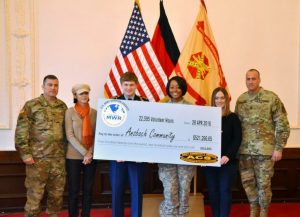 The volunteers of the year present the garrison commander, Col. Christopher M. Benson a symbolic check for hours donated by the community. (U.S. Army photo by Bianca Sowders)

ANSBACH, Germany (April 28, 2016) – Members of the U.S. Army Garrison Ansbach community assembled at the Von Steuben Community Center to recognize the community’s volunteers during a ceremony with the title “Lifting spirits, touching lives.”

The USAG Ansbach commander, Col. Christopher M. Benson and Command Sgt. Maj. Derek R. Cuvellier honored the volunteers in attendance for the many hours donated to the community. The majority of them volunteered for more than 300 hours, several even for more than 800 hours.

A special recognition honored four volunteers of the year in the following categories:

The Volunteers of the Year received a certificate of achievement and an engraved crystal plate.

“You as volunteers play an essential role in the installation programs. You directly and indirectly have affected Soldiers and Families, and improved the installation’s readiness,” said Benson, who addressed the honorees as keynote speaker. “Volunteers often don’t know the impact they have on another person’s life. Perhaps your sense of humor makes someone’s day better.”

At the end of the ceremony the garrison commander was presented a symbolic check for the dollar amount saved by the volunteers. From April 1, 2015, to March 31, 2016, volunteers of the USAG Ansbach community contributed 22,595 hours, worth an estimated $521,266, according to USAG Ansbach Army Community Service officials.