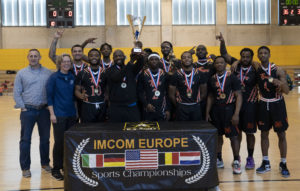 The tournament started Feb. 11 and featured nine teams from the Army and Air Force installations across Europe.

“These are the community level teams from each installation – the all-stars,” said Chris Cornelison Family, Morale, Welfare and Recreation sports and fitness director, U.S. Army Garrison   Ansbach. “The tournament started as pool play. We split them up in two groups and everybody played a certain number of games then they advanced to the brackets.

“Then it was a March Madness-style single elimination. Win or go home,” said Cornelison. “It’s really good quality of basketball with some of the best players we have in Europe, some of these guys have or will play All Army or All Air Force basketball at some point.”

The Tigers, Enrique Bush, an aviation operations specialist with 1-3 Attack Battalion, was recognized as the Tournament MVP. “It feels amazing,” he said. “I can’t really do this without a great team, the last tournament I was in a slump and they all came and told me they got me.”

Ansbach and Ramstein have battled before at a tournament in January when the Rams came out on top by 1 point. “It’s a new rivalry, we have a lot of wars,” said Tigers Coach Kenneth Ford. 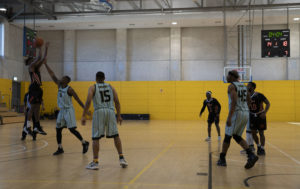 “They were the king of the block and we were the hungry young team coming in trying to make a name for ourselves.

“I can’t even put it in words how fulfilling (this is), this what redemption feels like,” said Ford. “We worked hard to get back to this moment. A lot of late nights in here (the gym) until midnight or one in the morning on work nights.”

Ansbach’s KFC hosted the tournament in 2019 and was scheduled to host in 2020 but right before the tournament was supposed to happen they shut everything down due to the COVID-19 pandemic.

“Any time we get to host a prestigious tournament like this it’s a pleasure and an honor,” said Cornelison. “Not everybody gets selected, you have to have the right facilities and the right personnel to be able to do it.