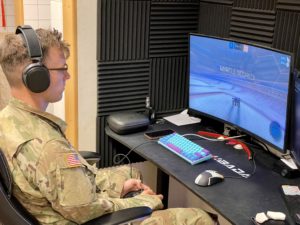 The competition was held by the Better Opportunity for Single Soldiers (BOSS) program in conjunction with U.S. Army Esports and included several different games Soldiers could compete in, placing all competitors against their peers in a tournament to see who the best in Europe was.

The stage was set with every Soldier logging in at a set time and date from their respective locations and joining custom matches.

In the Rocket League tournament, the players faced each other in “1v1” style brackets where the winner would advance until eventually reaching the finals.

“It was a great experience, one hundred percent. Especially because of the prizes, it was a no cash entry tournament were you could play competitive and put yourself out there by streaming and creating content,” said Cole.

Cole, who has been playing Rocket League since 2015 with over 4,000 hours played, won the tournament undefeated and in one of his matches beat his opponent 27-0. This is Cole’s second time winning a Rocket League tournament. He has previously won an ESL tournament in the North American Region.

In the Fortnite tournament, the competitors would join each other’s virtual lobbies and try to accumulate as many eliminations as possible. The player that ended the match with the most eliminations would move on until also reaching the finals.

“I was going to win it. I just knew,” said Roberts, who has been playing Fortnite since the game was first released back in 2017.

According to Roberts, the trick to winning is consistency, and most of all, luck. He proved this when on the day of the grand finals, Roberts recorded his most points in a single match scoring 16 eliminations.

“Anyone can be good, but can you be consistently good? Can you make the right decisions all of the time to ensure you play your best every game?” said Roberts.

Roberts proved he was the best in Europe by winning the Fortnite tournament and securing the prizes that came along with the bragging rights.

“Gaming is all about confidence and your mindset, if you have a bad round one game you have to have the resiliency to continue pushing forward,” said Roberts. “That’s something that the Army definitely helped contribute to my gaming and my discipline.”

Roberts first heard of the competition when he saw a flyer on his barracks bulletin board whereas Cole heard of it while in a BOSS meeting discussing upcoming events.

Both Soldiers were adamant about participating in future tournaments as they both had very good experiences on how the competition was held and ran.

“All Soldiers who love gaming and want to compete should definitely sign up for the next tournament,” said Cole.

Gaming is a big part in the life of many Soldiers who find it serves as a release after work and a way to keep their minds busy.

“It’s really good that the Army gives you a chance to demonstrate your skill in something you love to do,” said Roberts. “Not everyone likes to travel or spend their time outside, this event allows us to do something we love, even here in Europe.”

Both Soldiers received various prizes for winning the tournaments in their respective games. The prizes were presented to the Soldiers by the United States Army Garrison Ansbach Command Sgt. Maj. Eric Bohannon and the Ansbach BOSS Representative Spc. William Taylor.

The next virtual gaming tournament will be held by USO Europe on September 12, 2021 and is also an open competition for all DoD ID cardholders, 18 and over in Europe and Africa.