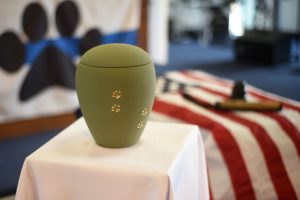 Pictured is part of the ceremonial display for military working dogs Danny and Kajo, who were honored May 3, 2016, at Katterbach Chapel at Katterbach Kaserne, Germany. (U.S. Army photo by Stephen Baack, USAG Ansbach Public Affairs)

ANSBACH, Germany (May 12, 2016) – Military police working dog handlers and other community members formally bid farewell to two of their canine counterparts during a May 3 memorial service at Katterbach Chapel.

Service attendees, which included members of the U.S. Army Garrison Ansbach Provost Marshal’s Office and the 131st Military Working Dog Detachment, honored the memory of military working dogs Danny after his passing Jan. 26 and Kajo after his passing March 3.

With biographies that include years of police patrols, deployments, training rotations and high-level recognition for their work, the dogs’ careers could be mistaken for those of accomplished Soldiers.

As a patrol explosives detector dog, MWD Kajo deployed to Afghanistan and Tanzania, Africa, with her handler at the time, Sgt. Kara Yost. Kajo also served in two monthlong multinational force training rotations in Hohenfels, Germany, and conducted many hours of community policing in Hohenfels and Ansbach. Kajo conducted four presidential sweeps and is the recipient of a coin of excellence from the secretary of the Army.

MWD Danny served the USAG Bavaria military community as a patrol drug-detector dog for more than six years, which included community policing, health and welfare inspections for commanders throughout Bavaria, and demonstrations of his capabilities as a military working dog.

Staff Sgt. Miranda Olejniczak, military working dog handler and kennel noncommissioned officer in charge with the 131st MWD Det., 615th Military Police Company, was partnered with Kajo for more than a year and briefly with Danny shortly before he passed. Olejniczak recited the biographies of both dogs.

“Even after the onset of his age-related aches and pains, Danny was still determined to work,” said Olejniczak, who then spoke fondly of her canine partner, Kajo.

“MWD Kajo was born on the 14th of February – quite the coincidence since he never met anyone he couldn’t make fall in love with him,” she said. “He was as dedicated to his play as he was to his work.

“Kajo was anything but ordinary,” Olejniczak continued. “Many of you have come here today to honor our canine companions because to say that they’re just dogs would not just be an understatement, but a lie. My partner was never just a dog.”

“From time to time, people would tell me, ‘Lighten up. It’s just a dog,’ or, ‘That’s a lot of money for just a dog.’ They don’t understand the distance traveled, the time spent or the costs involved for ‘just a dog,’ said Olejniczak, reciting her poem. “Some of my proudest moments have come about from just a dog. Many hours have passed, and my only company was just a dog – and I did not once feel slighted. Some of my saddest moments have been brought about by just a dog. And in those days of darkness, the gentle touch of just a dog gave me the comfort and the reason to overcome the day. For those that think it’s just a dog, then they would probably understand such phrases as, ‘It’s just a friend,’ ‘just a sunrise,’ or, ‘It’s just a promise.’”

Sgt. Patrick Woods, assigned to the 1st Platoon, 615th Military Police Company, spoke about Kajo during their time together in Hohenfels.

“We could go to him for many things,” Woods said of Kajo. “I guess you could say he was our priest – our little, furry priest – because there was many times that ol’ Sergeant Woods had enough of pretty much everybody in the platoon and went to little Kajo and said, ‘Kajo, let me tell you about what happened today.’ … Truly a remarkable animal and a remarkable comrade that we served with. He will be greatly missed.”

Staff Sgt. Joshua Campbell, detachment sergeant for the 131st MWD Det., presented the dogs’ identification tags to Olejniczak and Pfc. Brady Lynch, “symbolizing that they are finally at rest and honoring their dedicated service,” said Sgt. Paige Mueller, who served as master of ceremonies.

Next, Spc. Cara Spring, working dog handler with the 131st, read the poem “Guardians of the Night.” Although uncredited, this dramatic monologue is often recited at memorial services for military working dogs and police dogs.

As is the case with a Soldier’s memorial, the playing of Taps followed the remarks. The ceremony ended as attendees paid their final respects at the foot of the dogs’ ceremonial displays.

“We see our dogs as heroes,” Olejniczak had said before the memorial. “They’re not just dogs to us; they’re the best battle buddy anyone could ever have. They’re our counselor, our friend, our safe space when everything else goes wrong. They exemplify the meaning of loyalty.” 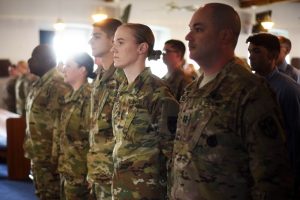