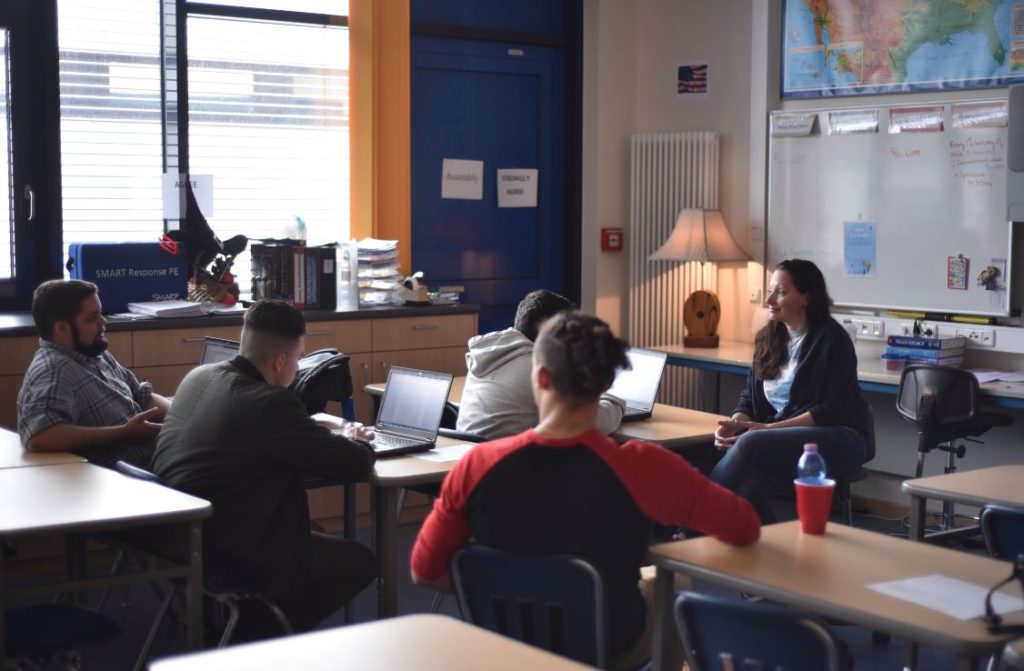 Dr. Tricia Surinak, a teacher at Ansbach Middle High School, has been named the 2017-2018 Europe East District Teacher of the Year.

ANSBACH, Germany (May 4, 2017) – The Department of Defense Education Activity has named U.S. Army Garrison Ansbach’s own Dr. Tricia Surinak as the 2017-2018 Europe East District Teacher of the Year.

Surinak serves as a social studies teacher at Ansbach Middle High School. She has been part of the DoDEA team since 2008 and joined Ansbach MHS a year later after having taught at USAG Stuttgart.

Surinak’s honor is notable in that 32 schools comprise DoDEA’s Europe East District, which is the largest in Europe.

“Dr. Surinak was a natural submission from the perspective of our school and school community,” said AMHS Assistant Principal Ester Harrison.

Harrison takes into account two main factors to Surinak’s success: her work with fellow educators in helping shape the evolving curriculum, and her connection with the students.

Harrison said Surinak has been a key player in AMHS’s success as DoDEA shifts to more modern curriculum standards – specifically college and career readiness. Harrison described Surinak’s role in the school as a teacher-leader, an unofficial title she’s held for the last three years across middle and high school grades and various subjects.

Surinak’s schedule has been modified with an extra planning period to give her the opportunity to plan, research, co-teach and demonstrate lessons. In short, it has been Surinak’s mission to bridge content and understanding across grade levels and curricula, said Harrison.

“She just took this on without any hesitation or reservation and created something very, very special,” said Harrison “Stepping outside of her department – social studies – collaborating with math teachers, with science teachers – she has been all over this building.”

“She really became just a conduit of information, support and energy, and the trust that went with this was huge,” Harrison added.

Possibly a larger reason for her nomination, though, is Surinak’s teaching abilities from the perspective of the students.

“The kids love her,” said Harrison. “They love her. Students who are identified as at-risk will do anything for her. In her class they’re not at-risk because she’s able to reach the whole child. She understands that this life is a difficult life and she’s here to support these kids for the time that they’re with us and give them the tools and the skills that they need for next year or the next duty station or the next stage in life.”

Tara Duplessie, a mother of seven children – four of whom have experienced Surinak’s teaching in subjects such as psychology, history and government – wrote a letter to DODEA in January in support of Surinak’s nomination.

“I have seen through the eyes of my children in working with Dr. Surinak in these many subjects how she works to share knowledge instead of just teach, and to inspire instead of just instill information,” Duplessie wrote in the letter.

Duplessie, who works at the school herself, said she regularly sees the positive effect Surinak’s teaching has on many other students.

“A lot of the kids here call me Mrs. Mom, so I get the opportunity to see a lot of the other kids here who I’ve kind of mothered and see them work through her program,” she said.

“As I said in my letter of recommendation, she is the type of educator who pulls in all kinds of media and allows the kids really to find their niche and find the things that speak to them and helps them tie it in so they understand how it contributes to their education, which is fun to watch,” said Duplessie.

Duplessie recalled an occasion when Surinak helped set up a student for success by encouraging him to align his dream of one day becoming a Navy SEAL with his psychology project. For the project, the student evaluated the effectiveness of different interview and interrogation techniques.

“I watched him completely bring that program together and succeed in producing a wonderful project with her guidance,” said Duplessie. “It was very thorough, and for a student who struggles sometimes to keep on task, she continued to guide him and get him back to what he was looking at and feel that success. To me that’s invaluable. In the world today, these kids need to experience success for their actual work, for what they’re actually doing.”

Concerning her recognition, Surinak was caught off guard.

“It’s surprising because I’m being recognized for something that I just do every day and I enjoy so much,” said Surinak. “Sometimes I have to pinch myself and say, ‘Wow. I’m getting paid to do this.’”

It was the school’s previous principal, Dave Carlisle, who nominated her. Surinak had taught three of his children as well.

Surinak said she was pleased to read through the letters of recommendation from both parents and colleagues.

“It felt really warm and really nice to get their perspective on what I do in my classroom,” she said.

Surinak teaches a range of subjects related to and under the umbrella of social studies, including psychology, contemporary issues, U.S. government, U.S. history and honors world history.

“She has an amazing CV, but at the end of the day I think what matters most to Tricia are the students – the kids she’s working with every day – and her colleagues, and making sure that everyone feels success in how we move forward and take on some of the challenges that we face,” said Harrison. “She’s a really extraordinary educator.”

Surinak said her extra planning period gives her the freedom to collaborate with her fellow teachers from both the middle/high school and the elementary school.

“It’s either creating lessons that we co-teach or giving teachers feedback on what they’re doing and just going in and assisting them in their classes with students who are struggling learners or giving them feedback for behavior management,” said Surinak. “So, it’s just being a jack-of-all-trades support person. [It means] sometimes having to study up on physics or geometry to come up with some lessons.”

Surinak attributes her background in special education, along with her experience in teaching inner-city students, in being able to reach all of her students, including those who may be struggling with the deployment of a parent, the permanent change of station of a best friend, or any of the many issues that make being part of a military family uniquely challenging.

“They come to the table with a lot of outside stresses, but yet they’re also expected to excel academically,” she said. “Keeping that in mind, you really just have to create this warm, safe place for them where they will then take the necessary risks to excel academically.

“I keep the standards high for all of my students, but I make sure that they can reach certain benchmarks as they go along,” Surinak added. “So, we don’t raise the bar high and say, ‘OK, you need to jump over that.’ It’s raised incrementally for them to get them there. And I just don’t accept any excuses from them, but at the same time I do have a hardline approach with them. If you ask any of them, they would never say that I’m a ‘hard’ teacher, because we have a lot of fun, and I’m very enthusiastic about what I teach and about whom I teach.”

To see this story as it appears on Army.mil, visit www.army.mil/article/187199.