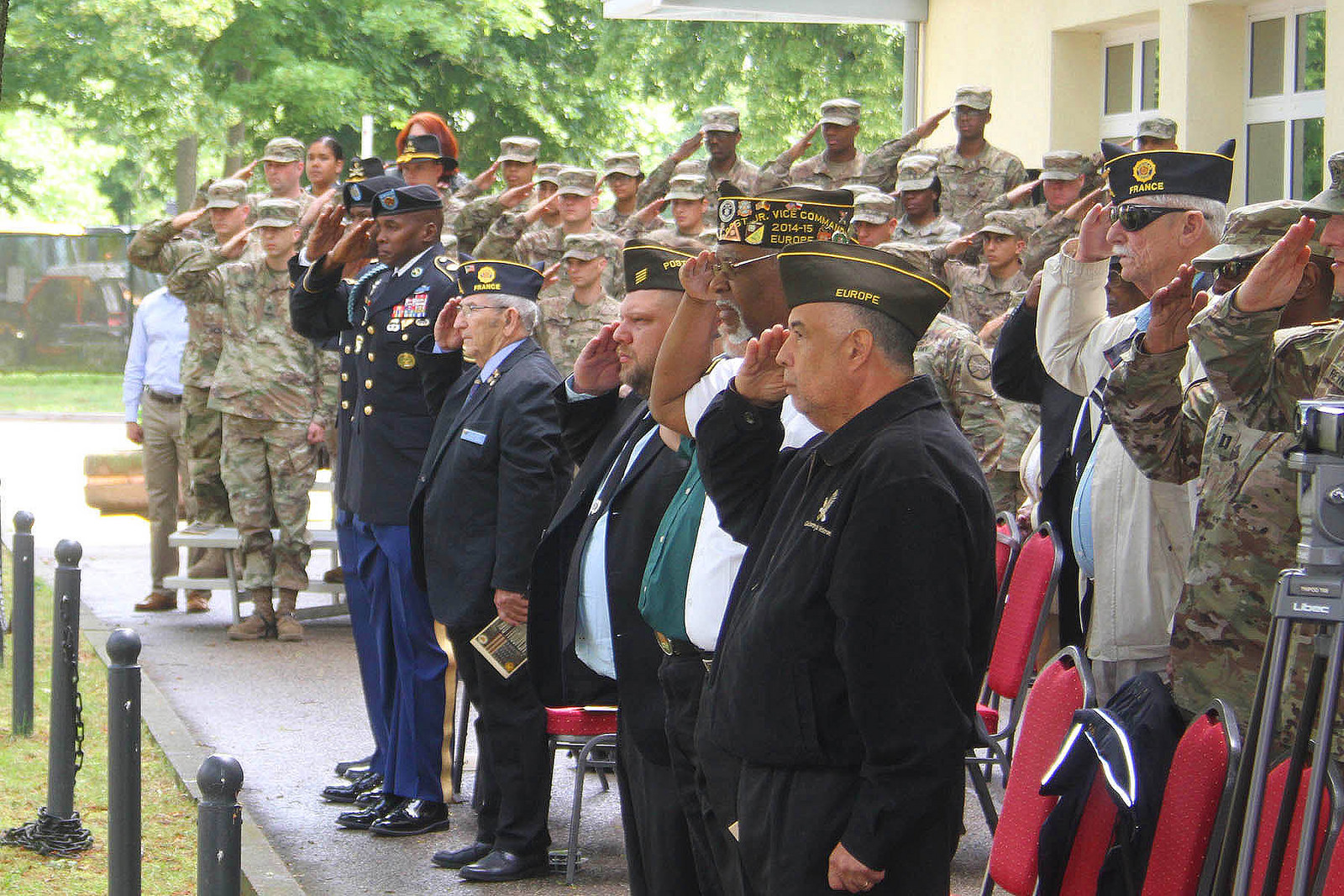 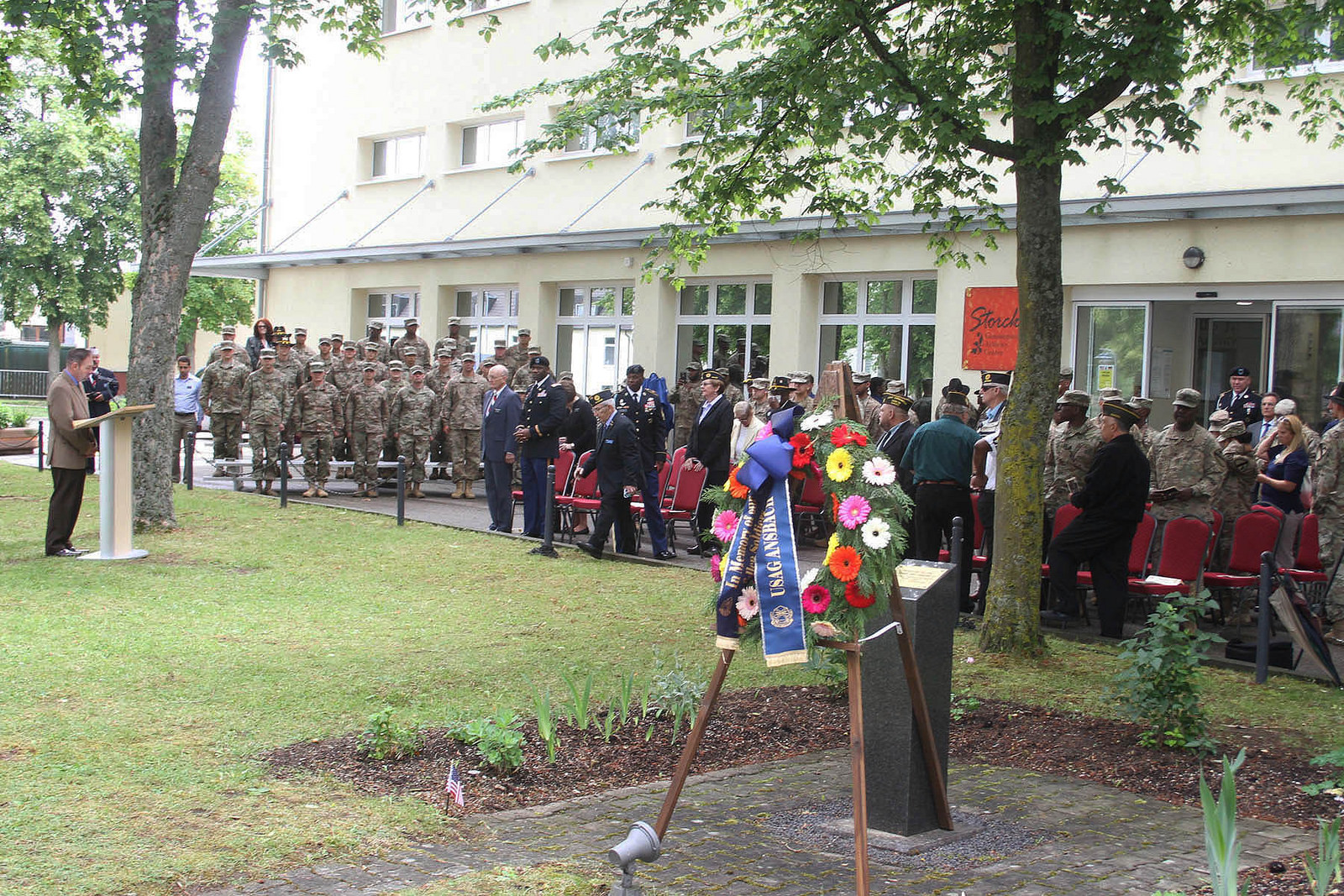 During the ceremony USAG Ansbach Soldiers and civilians paid formal respects to the sacrifice of America’s veterans by placing wreaths at the stone markers in the Stork Barracks 12th Combat Aviation Brigade Memorial Park located adjacent to the town of Illesheim. The event also included an invocation by Col. (Ret.) Steven Paxton, and a reading by American Legion Post 1982 president Kenneth Aungst of the names of the fallen, enscribed on the four memorial markers placed in the park.

In his remarks USAG Ansbach HHD commander Capt. Olufemi Apata, guest speaker, addressed the participants saying “Memorial Day is a day of solemn mourning, but it is also a day of reverent celebration,” said Apata, “of men and women who gave all so that we might continue to enjoy the freedom and benefits of our great country.”

After Apata’s brief but solemn address he joined Command Sgt. Maj. Tavernier in the laying of the wreaths, accompanied by members of the local American Legion and VFW. 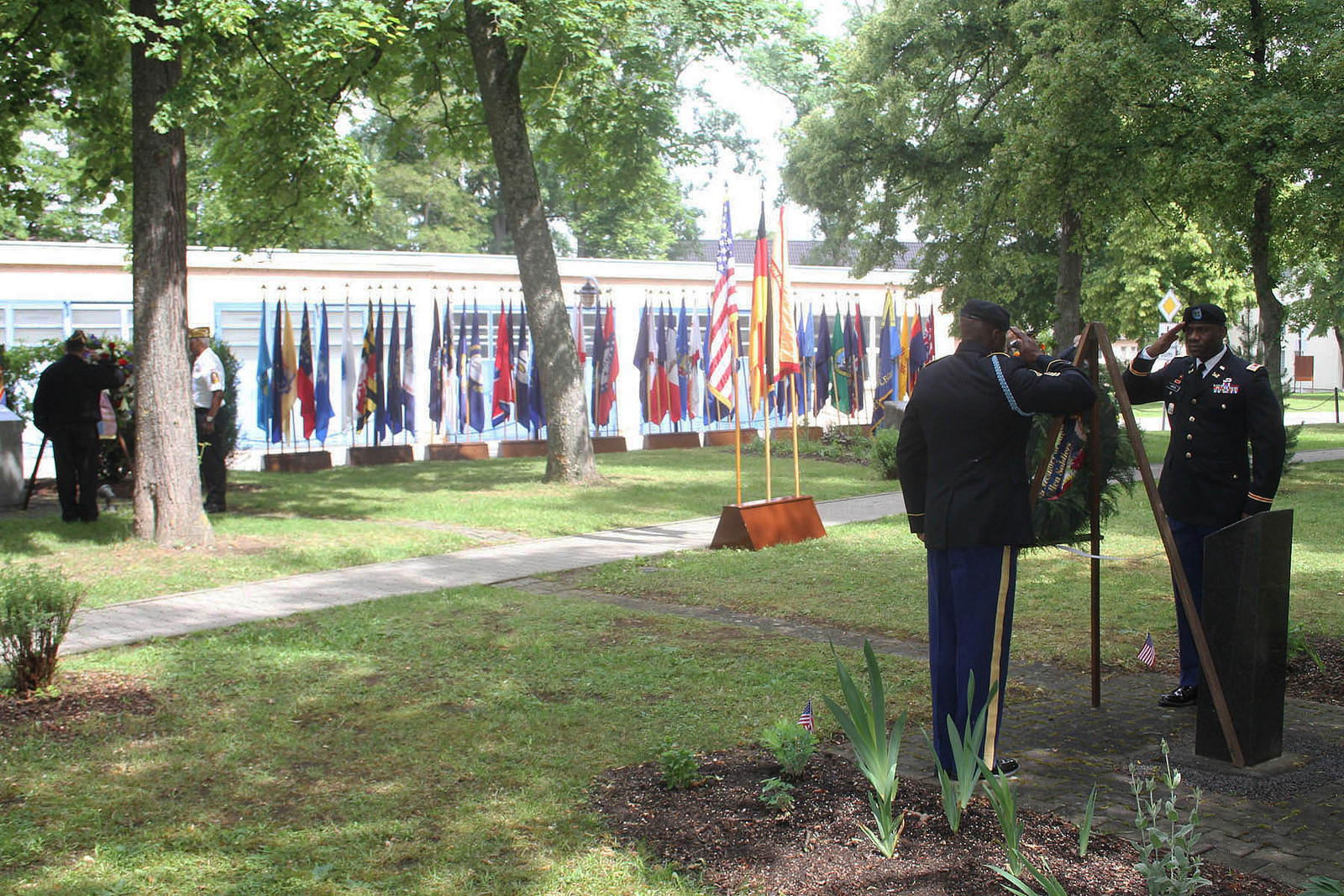 According to the Arlington National Cemetery website, Memorial Day, originally called “Decoration Day,” was created at the end of the Civil War to establish a time for the nation to decorate the graves of its war dead with flowers. At a Decoration Day held at Arlington National Cemetery in 1868, with the wounds of the Civil War still fresh, then Ohio Congressman and future President, James Garfield said that he found it difficult to, “utter the right words on this occasion. If silence is ever golden, it must be here beside the graves of fifteen thousand men, whose death was a poem, the music of which can never be sung.”

The holiday, which is currently observed every year on the last Monday of May, will be held on May 28, 2018. Each Memorial Day the flag of the United States is raised over the U.S. capitol to the top of the staff and then solemnly lowered to the half-staff position, where it remains only until noon. It is then raised to full-staff for the remainder of the day.

The half-staff position remembers the more than one million men and women who gave their lives in service of their country. At noon, their memory is raised by the living, who resolve not to let their sacrifice be in vain, but to rise up in their stead and continue the fight for liberty and justice for all.

For many Americans, the central event is attending one of the thousands of parades held on Memorial Day in large and small cities all over the country. Most of these feature marching bands and an overall military theme with the National Guard and other servicemen participating along with veterans.

mission of streamlining base support operations management, allowing tactical commanders to concentrate on their essential training and missions. The garrison takes pride in its support to more than 6,000 Soldiers, civilians and family members working and living within the USAG Ansbach area. To learn more about the people and facilities of the U.S. Army Garrison Ansbach (USAG Ansbach) and the people they support in Ansbach, Katterbach and Illesheim, visit the community website at http://ansbach.army.mil

To view a photo essay of the observance click on the photo below: