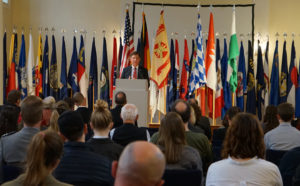 ANSBACH, Germany (April 4, 2022) – U.S. Army Garrison Ansbach and the City of Ansbach hosted the U.S. Consul General-Munich at the first of three Speaker Series events March 29 at the Karlshalle in downtown Ansbach.

The speaker series was the idea of Garrison Commander, Col. Karen Hobart. The series focuses on the mission and role of the U.S. Army in Germany. Planning for the series began in 2021 before the current events in the Ukraine.

“Our grandparents have planted this transatlantic tree and cared for it and we, the next generation, we have reaped the fruit of this partnership,” Liston continued.

He spoke about three dimensions of the German-American relationship – political, economic, and cultural. Due to current events, Liston focused on the Ukraine crisis to highlight the importance 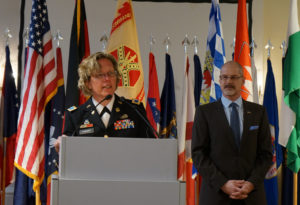 “From Nuremberg (Germany), it is only a 75-minute flight to Lemberg, Lviv, (Ukraine) where Russian rockets are falling,” said Liston. “The first large attack war on European ground since 1945 is not even two flight hours from here.”

He explained that economically, more than 30 countries that hold more than 50 percent of the worldwide economic power, established hard sanctions against Russia. Many foreign companies closed their offices and branches in Russia. Everything that people need on a daily basis is getting more expensive. In society, many national, as well as international establishments, ended their cooperation with Russian artists, athletes, and scientists.

“All that would not be possible without a good, stable transatlantic relationship,” said Liston. “Germany is an indispensable political partner within NATO and at the side of the European Union. Together we support Ukraine with weapon deliveries, protect the NATO area with our Soldiers, and coordinate with economic and social measures we implement against Putin.

“Additionally, we are taking care of two million refugees that have come from Ukraine to us into the west,” he added. “We in Germany and America are doing this because we share common political goals since the end of World War II. We want as many people as possible on this earth to be able to live in peace and freedom.”

Liston discussed trade relationships and the importance of cultural exchanges, highlighting Ansbach and its sister city, Bay City, Michigan. “I find that Middle
Franconia and the American Midwest go great together,” he said.

He concluded with a quote from President Joe Biden that sums up the significance of relationships, “The transatlantic partnership is and has to remain a pillar of all that we want to accomplish in the 21st century.”

The City of Ansbach is cohosting the series with the garrison. Deputy Mayor Markus Bucka, representing Lord Mayor Thomas Deffner, said “when this speaker series was planned, it was certainly not as apparent what bad things are now happening in Ukraine. We know that only with a lot of communication, we’ll be able to solve prejudice, resentments, and misunderstandings. 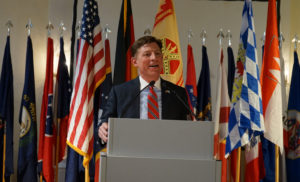 “This applies to global politics the same as it does for the local area, in our city in our region,” he added. “The U.S. military base Ansbach and Illesheim pose a strategic aviation platform since the Second World War for the U.S. Army in Europe. I believe it is even more important that these installations remain.”

Bucka thanked the Army for its partnership and explained that the series and the consul general’s speech was very important especially to the younger generation.

“I am 62 years old and luckily have not experienced wartime, but we had a different relationship with the U.S. Army, which was taught to me by my parents, in principle, following the history of the Second World War, that it was a savior and rescuer,” he said. “That, in my opinion, young people lack completely. This insight and this information from the older generation and the Ukraine conflict shows us this dramatically. Peace cannot be taken for granted.”

There are two more speaker series events planned for April and May. They will discuss “The Role of our U.S. Army Aviation Partnership in Germany and Beyond.” and, “Our Uncertain Future: Why Partnerships are Important to Enhancing Security.”