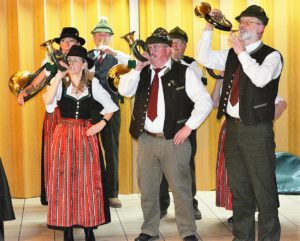 ANSBACH, Germany — In a time-honored and centuries-old traditional ceremony conducted Jan. 26 at the Gasthaus Rose in Flachslanden near Ansbach, members from the U.S. Army Garrison Ansbach community were welcomed and initiated into the fraternity of German hunters.

To the musical accompaniment provided by the Jagdhornbläser-Jägervereinigung Ansbach (The Hornblowers-Hunters Association of Ansbach), seven American citizens were newly christened as ‘Jungjäger’ – knighted into the German Hunters brotherhood – with the words “May the first Schlag (or stroke) on your shoulder knight you a hunter; may the second enable you to always do what is right; may the third ensure you never give up the hunter’s honors,” as a blade was laid once across each shoulder and then the head in traditional medieval fashion.

The Jägerschlag is an initiation ceremony for new hunters in Germany that traces its roots back to medieval times and the old traditions celebrating the spirit of brotherhood in the joint experience of hunting rather than focusing on bringing home game to the family dinner table. This solemn rite of passage is closely tied to a code of ethics. The first stroke anoints the Jäger as a hunter; the second stroke signifies granting the strength to always conduct the hunt righteously; and the third stroke binds the Jäger to never stray from the Hunter’s Code of Honor.

“In the days when the United States was being settled and explored – and especially when people started moving out west – if you didn’t hunt, you didn’t eat.” said Robert Goodenow, an avid hunter from his boyhood in New York, one of the seven American hunters to take part in the ceremony.

“Hunting here has a different history of traditions, it was the sport of kings and nobles; it has a unique culture and society. It’s also more formal and requires a greater knowledge of the land, the game, the season and the equipment” said Fred Lane, Program Manager for the Hunting, Fishing and Sports Program at the Ansbach Family Morale, Welfare and Recreation (FMWR) office.

“What we share is that hunting and often guns are passed down from one generation to another, as family traditions and heirlooms. It’s a rite of passage for many, no matter what state in the U.S. you’re from,” said Lane, a hunter of more than 33 years. 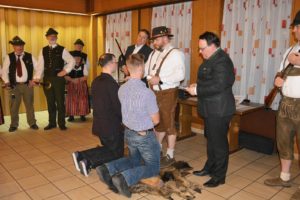 “We also share a respect for nature and the environment; and particularly about being mindful and responsible about gun safety. I sit on the board of officers with the Bayerischer Jagdverband (BJV) Jägervereinigung Ansbach and represent the U.S. Jäger here in Ansbach. It’s a great honor and proof of our great friendship. We truly have no borders separating our love for nature and the love of our sport.” Lane said.

“I would like to thank our German friends for giving us the opportunity to be part of this wonderful tradition,” said participant Rich Fry, in between the hunting calls of a German brass ensemble clad in traditional hunting garb and providing the musical framework for the festive event.

“Anyone can come along and enjoy the camaraderie of Ansbach’s hunters, with the option of becoming a member of the Hunting, Fishing and Sport Shooting (HFSS) Club through Family and Morale, Welfare and Recreation (MWR) programs.” said Lane.

The German-American group gathers for a joint Stammtisch (meeting) once a quarter, and for numerous hunting events throughout the year. Younger applicants must be at least 18 years old by the time they receive the test for obtaining a German hunting license.

The HFSS Club hosted the event with the BJV; it’s many members turned out in traditional German green-grey hunters garb, Lederhosen, sturdy wool coat and felt alpine hats decorated with a Gamsbart — a tufted plume held or adorned with medals or sliver clasps which was originally a deer hunting trophy.

Lane worked with the BJV to include his newest graduates in the hunting celebration. The American hunters began their journey for official certification with an extensive 10-week course designed to teach 55 class hours of instruction to German hunting standards. Safety is front and center in every module of the course.

J.E. Barrett, an American knighted at the ceremony, said he was initially surprised with the amount of instruction required for certification to join the ranks of Jungjägers. “I’m a better hunter for it and I now can enjoy more of the aspects of it,” Barrett said. “This is something that is unique to my tour in Europe; I would not have missed it for the world and I’ll never forget it.”

The culmination of the 10-week course is a six-part examination on everything from biology and environmental laws to the use of hunting equipment and dogs. Spread throughout the entire course is time devoted to weapon marksmanship. Fry said this is because in Germany a sudden, clean kill is important.

Lane said that certification is only the first step for new hunters: “The real course begins after you graduate. That’s when you really begin to understand the culture of a mindful hunter and use your knowledge to be the best hunter you can be.”

For more information on hunting and fishing opportunities in Ansbach and Illesheim, and details about signing up for 2018 spring and summer hunting courses contact the Ansbach Outdoor Recreation at DSN 467-3980 or CIV 09802-83-3980 or visit their Facebook page at https://www.facebook.com/AnsbachHSS