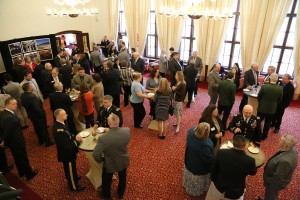 Guests from Ansbach and Illesheim and surrounding communities and members of the USAG Ansbach community visited the venue at Bismarck Kaserne to partake in food and refreshments and to meet with each other in a friendly, formal atmosphere.

Local mayors, other community leaders, members of the German army and representatives from offices and directorates of USAG Ansbach and its tenant organizations met Col. Christopher M. Benson, USAG Ansbach commander; Kellie Benson, his wife; James A. Walls, deputy to the garrison commander; Master Sgt. Stephen Wendt, fulfilling the role of command sergeant major; and Min Wendt, his wife, in a receiving line. Peter Pabler, an employee of the Housing Division of the garrison’s Directorate of Public Works, stood at the end of the receiving line dressed in the traditional outfit of a chimney sweep to hand out pennies to guests, a traditional gesture of good luck in the new year. 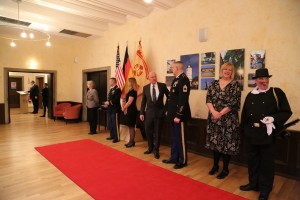 Amy Red Cloud, an Army spouse, played piano in the lobby of the club; Family and Morale, Welfare and Recreation served food; and volunteers with the on-post chapter of Better Opportunities for Single Soldiers attended to the guests needs. The food included dishes thematically related to regions of the U.S. Small, stuffed potatoes represented Idaho’s famous starch staple; nachos topped with fried beef and miniature burritos represented Tex-Mex and Southwest cuisine; fried clam cakes and fresh salmon and shrimp on cream cheese and cucumbers represented coastal fare; and miniature sandwiches represented the tastes of the city of New York.

While guests dined, after Red Cloud received a bouquet for her musical contribution, Benson took the podium to talk to guests about the partnership between Germans and Americans.

“The 70 years of German-American partnership and the 66 years of the NATO alliance have enabled enduring peace and stability in the region,” said Benson.

Benson discussed the significant recent fluctuations in the garrison’s mission, from the closures of USAGs Bamberg and Schweinfurt in 2014, to the forthcoming closure of Barton Barracks, to the restructuring of the 12th Combat Aviation Brigade, to the new missions of supporting rotational aviation troops at Storck Barracks and supporting the training missions in Eastern Europe. These changes come in addition to the ongoing mission of supporting tenant units, Soldiers, civilians and their Family members.

Because of the garrison’s continuing essentiality to the U.S. Army mission in Europe and the North Atlantic Treaty Organization alliance, Benson anticipates the partnership between the garrison and the host nation communities to endure.

“I am very confident that as long as Europe’s security is threatened, and our NATO allies require U.S. Army aviation assets, Ansbach will remain Europe’s strategic aviation platform,” he said.

Benson singled out the mayor of Illesheim, Heinrich Förster, for his, his family’s, and Illesheim’s longstanding relationship with Storck Barracks and the garrison.

“Illesheim would not be what it is today without your support,” said Benson. “So many Americans have such fond memories of their time in Illesheim, and most of them know you by name.”

Förster, whose father was also mayor of Illesheim, recounted how Soldiers would be at his home even as a child.

“We had always had a good relationship with the U.S. Army, and I hope that we will have it many more years,” he said.

Benson thanked all the community leaders for their partnership throughout the years with the garrison, thanking them for “the cooperation and professional relationships we share as we work together to maintain our training and readiness.”

“It is important to me that you consider us a good neighbor, that we are good stewards of the environment and resources, that we are transparent, and that we earn and keep your trust,” said Benson to the audience. “I wish you all the best for a happy, healthy, peaceful, safe, and prosperous New Year!”

To read the story as it appears on the Army News Service, visit www.army.mil/article/162126.