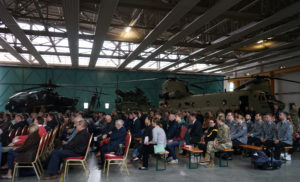 ANSBACH, Germany (April 28, 2022) —  U.S. Army Garrison (USAG) Ansbach and the City of Ansbach hosted the second of three Speaker Series events April 21 with a discussion about the role of Army aviation in Germany and NATO at Hangar 2 on Katterbach Kaserne.

The panel discussion was hosted by Garrison Commander, Col. Karen Hobart, who explained, “when we discuss aviation, we have to talk about USAG Ansbach home to Aviation and ADA (air defense artillery). The ‘so what’ of what Ansbach provides to security projection responsibilities.” 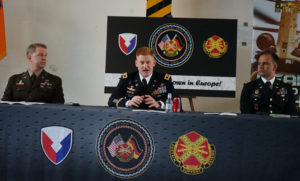 Schuck explained the importance of the 12th CAB as the only enduring U.S. Army aviation brigade in theater. He went on to say, “it is first helpful to go back in time and understand our history to understand how we got here, in the 1980s the American forces in Europe numbered more than 350,000 personnel and we had more than 1,000 helicopters.

“However with the dissolution of the Warsaw Pact, the collapse of the Soviet Union in 1991 and the strengthening and establishment of the European Union, US service members and helicopter numbers all declined,” he said. “When I was a lieutenant in Katterbach in 2000, 22 years ago we had about 100,000 Soldiers across Europe and less than 200 helicopters, those numbers continued to go down.”

The U.S. Army realized in 2014 when Russia invaded Ukraine seizing part of the Donbas and also the Crimea at the time, having only one aviation brigade in Europe with 56 helicopters was not enough to ensure the security of the transatlantic partnership. “From that point, the U.S. government said we must increase the number of soldiers and aircraft in Europe, which is why we see the rotational brigade in Illesheim that operates there,” Schuck said.

“In seven decades, the bond between Europe and North America has made NATO the strongest military alliance the world has ever seen,” said Broam. “NATO is a bedrock of an enduring transatlantic security and it serves as the defensive wall of our shared values of democracy, individual liberty, and the rule of law.

“NATO’s essential core tasks of collective defense, crisis management, and cooperative security allows a small nation or a large nation to be able to defer and defend their homeland,” he explained. 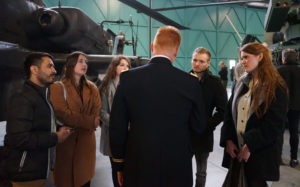 “For the first time in alliance history, all this stuff we are talking about (is seen) with the invasion of Russia into the Ukraine,” he said. “NATO as a whole has eight multinational NATO battle groups arrayed from the Baltic Sea all the way down to the Black Sea, 130 jets aircraft on high alert and located in 30 different locations along that eastern flank from Estonia all the way down to Bulgaria, and we also have 150 allied ships that are currently at sea, of those there are five aircraft carriers. That is a lot firepower arrayed from the high north all the way down to the Mediterranean.”

All of the panel members touched on the fact that training plays an important role in the success of NATO and the transatlantic partnership. Franck discussed training that occurred between the 12th CAB and the DSK.

“What we (DSK) essentially tried to do was understand our weaknesses, understand our strengths, and use that as an opportunity to work together to strengthen our relationships which is what we should be doing while we are in Germany,” he said.  “We worked our air maneuver operations and one of things that we didn’t have, we didn’t have aircraft.

“We had to work on air assault operations so we sent an invite to Colonel Schuck and the 12th CAB asking if they could send their Chinooks, their Blackhawks, and their Apaches to support our 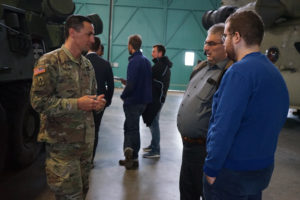 ability to do this training opportunity,” he said. “He said yes and we were able to confirm all the tasks we are supposed to do as a Division Schnelle Krafefte.

Franck went on to say that, “it is important that we work together as NATO Division Schnelle Krafefte and 12th CAB because we have critical capabilities that we must offer in any certain situations.

“If we can realize that (strengths and weaknesses) in training beforehand we are in a much better situation and in the future we are able to train those gaps because we understand each other’s weaknesses,” he said. “We can make sure those weaknesses don’t come up in a realistic situation – what we are really trying to accomplish is readiness.”

“It is tempting to want to have more U.S. helicopters and for us to have more of our own Soldiers but it is more powerful if we have to rely on one another and to have to come together and work as one,” said Schuck. “The air assault brigade needs helicopters to train and the aviation brigade needs infantry to insert and train with so building those enduring relationships not only bring us together in the military sense but they also bring us together in a social sense which is very important.”

Broam told about a real world event that occurred 12 years ago in Afghanistan to highlight the importance of training together.

“It was the Bundeswehr that was searching out IEDs (improvised explosive devices) in Kunduz, Afghanistan when they were ambushed,” he said. “It was two medevac helicopters from 12th CAB that went in and pulled out eight of the wounded Bundeswehr soldiers that night. 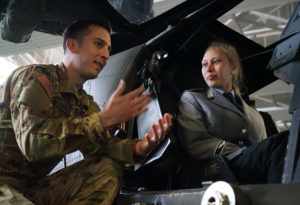 “Had those pilots not trained here in Bavaria at night in those difficult situations with the Bundeswehr that would have not been possible,” Broam explained. “I know much of the conversation (in Ansbach) revolves around the noise these incredible aircraft make but that training at night working with our Bundeswehr partners is truly important.”

“One thing we realized that even though we have different processes for the different militaries between NATO, national or U.S. policies we have more in common than we have different,” said Schuck. “Which it is good because it allows us to come together on common ground for training but one thing we need to get better at is building habitual relationships with the same units over time so that the we get past the easy training during the day time and we do the really difficult training close to the trees and at night time that takes time and trust.”

The speaker series was the idea of Garrison Commander, Col. Karen Hobart. The series focuses on the mission and role of the U.S. Army in Germany. Planning for the series began in 2021 before the current events in the Ukraine. The first event was held on March 29, U.S. Consul General-Munich Timothy Liston spoke about the transatlantic-partnership, where we have been and current events.

The final event of the speaker series is May 13 at the Karlshalle in downtown Ansbach and will focus on the future of the transatlantic partnership.