ANSBACH, Germany –  Native American Indian Heritage Month celebrates the original inhabitants, explorers and settlers of the Untied States. It also recognizes their achievements, continuing contributions and service to this country.

The USAG Ansbach community assembled at the Von Steuben Community Center for the annual observance Nov. 21 and listened the key note speaker Col. John Broam, commander of the 12th Combat Aviation Brigade, who highlighted the importance of Native American Indians in the history of the United States and the U.S. Army. “Native Americans have a distinguished legacy in the Army – many thousands have served in the armed forces from the early days of the Revolutionary War, with the Lewis and Clark expedition, as scouts with the U.S. Cavalry, as Code Talkers in World Wars I and II, and in Korea, Vietnam, Iraq and Afghanistan,” he said. 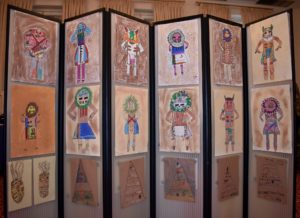 The aviation commander was followed by guest speaker David Craig, who related a Cherokee story about the opossum who bragged too much about its beautiful tail and was punished with public embarrassment.

After the official ceremony, Broam thanked  the volunteers who supported the event with presentations, set-up and cooking the special food samples, with certificates of appreciation.