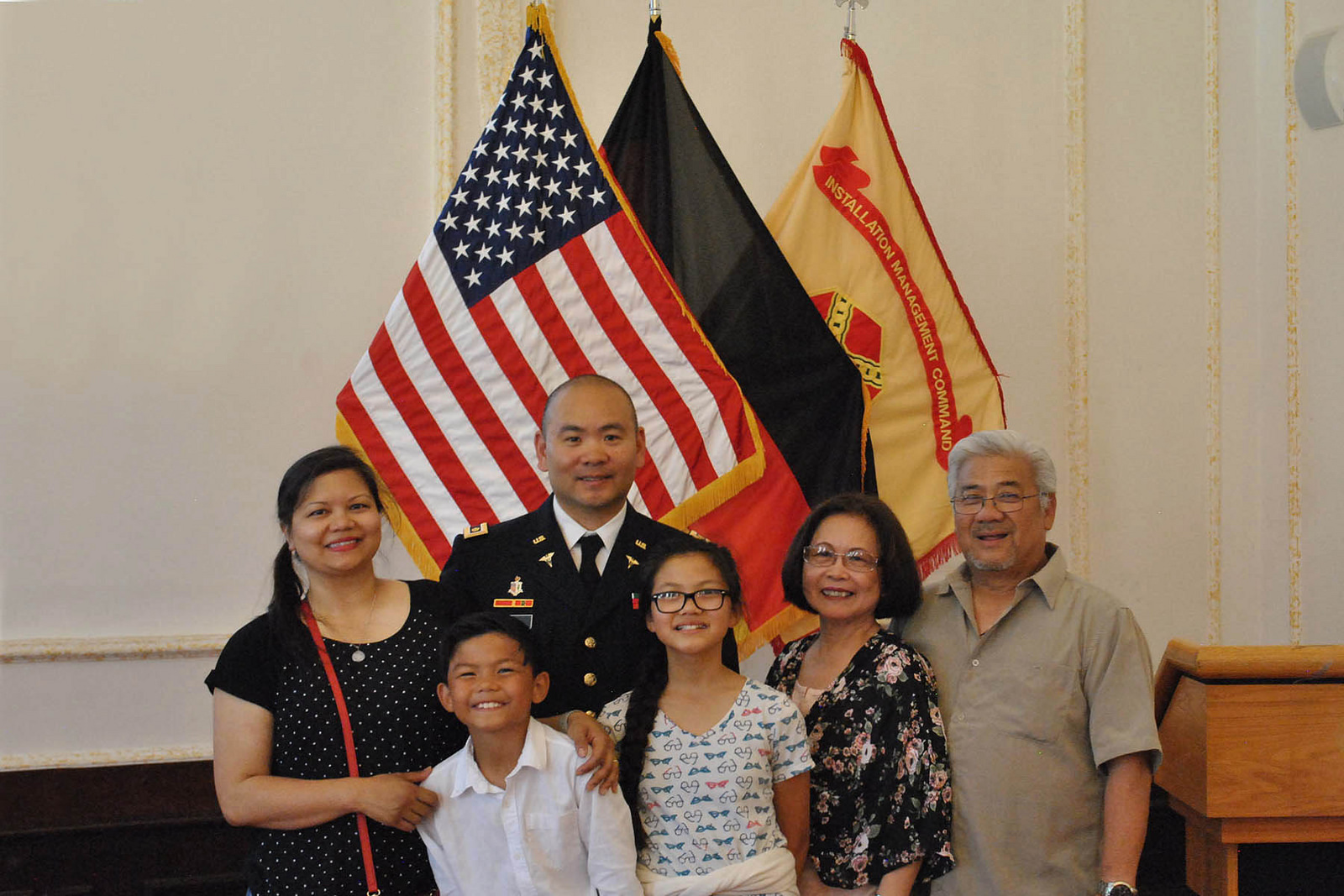 The USAG Ansbach Equal Opportunity Office (EEO) hosted the event, with this year’s theme being “Unite Our Vision by Working Together.” Guest speaker for this year’s Ansbach observance was Maj. Randy Viray, Chief Nurse at the U.S. Army Health Clinic, Ansbach.

During the ceremony a slide show presentation highlighted outstanding accomplishments and contributions of many Asian Americans and Pacific Islanders throughout U.S. history, beginning in 1763 with a group of Filipino sailors who established a settlement in Saint Malo, Louisiana, after fleeing mistreatment aboard Spanish ships, Asian peoples have come to America seeking refuge, freedom and new opportunities.

Since then, Asian Americans and Pacific Islanders have fought to preserve the Union between the North and the South, connected our nation from east to west, received our nation’s highest medal for valor and have served at all levels of the Army from private to Chief of Staff, and served our country as elected members of the U.S. House and Senate.

According to Pentagon figures, today more than 36,000 Asian American and Pacific Islander Soldiers serve in our Army.

Recognizing his family in the audience — wife, Jennie, and their two children, Carlie and Jacob, as well as his father and mother, retired Chief Warrant Officer Rolando Viray and Zenaida Viray, who were visiting from Tacoma, Washington, Viray reflected on his life and career as a third generation Filipino American in the U.S. Army.

“On 9 April 1942, Rudolfo Viray and Emilio Tubig, my two grandfathers, along with 75,000 Filipino and American prisoners of war, were forced to make an arduous 65-mile march to prison camps. The exact figures are unknown but it is estimated that 6,000 to 18,000 POWs died during what is known as the Bataan Death March,” Viray said. Both his grandfathers survived the Bataan Death March during WWII, and after the war they continued their service in the U.S. Army until retirement. 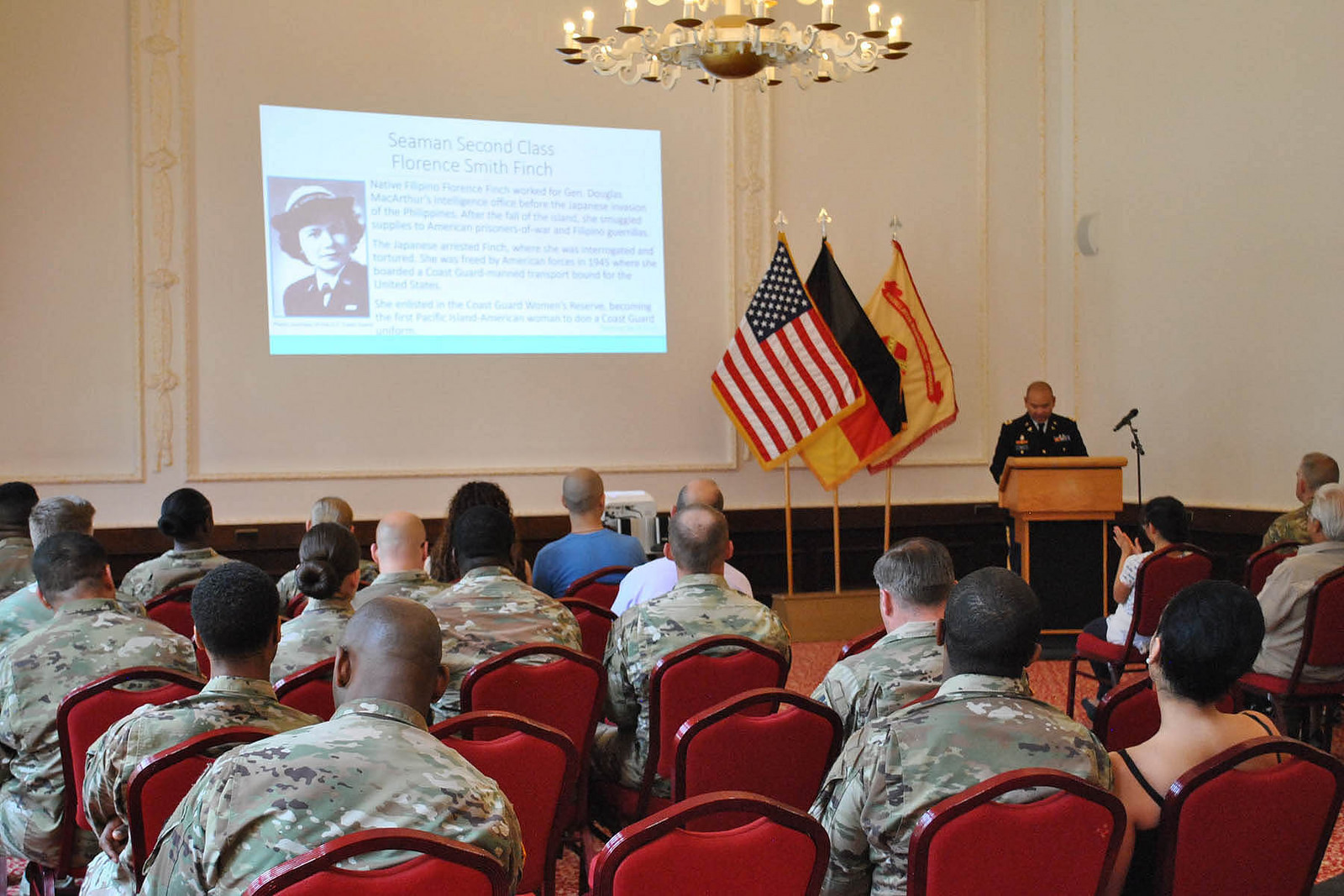 “Seventy-five years in the making, Congressional Gold Medals are being presented this year that honors the contributions of a quarter million Filipinos and Filipino Americans who fought in World War II, some paying the ultimate sacrifice. My father will be accepting the medal for my grandfather,” Viray said.

As a child, Viray didn’t hear many stories and wasn’t aware of what his grandfathers endured during WWII. Instead, he remembers their consistent focus: food, family and education. “Food was adobo, nilaga, pancit, siopao and lumpia,” Viray said. “The family was always getting together every weekend to eat lots of food.”

“For these two heroes, to ‘Unite Our Vision by Working Together,’ was not only to survive the war but also to live the American Dream of working hard, owning a house and raising a family,” Viray said.

Viray said his father, too, never talked much about the Army or his job. “He consistently focused on four things: food, family, education and fishing. My father was the cook in the family. He consistently had family dinner at 1700,” Viray said. “Instead of watching me play sports from the sideline, he volunteered his extra time as the coach. The focus was always to do well in school, finish college and have a career so I can start a family.”

Of his father, Viray said, “For this hero, to ‘Unite Our Vision by Working Together’ was not only to serve our country in the U.S. Army, but also do so with a balanced life of God, career and family.” Viray said, “Looking back at my first day in ROTC, my instructor said three words: God, country, family. After sixteen years of service, I am finally understanding that concept.”

Viray credits his children for reawakening his spirituality and bringing him back to God five years ago. “Carlie and Jacob had so many questions that I could not answer, so we all started attending Mass again to learn about God as a family,” he said. “Country. I am a third generation Filipino American in the U.S. Army. I continue a strong tradition of continued active duty service, having a family member serve in World War II, the Korean War, Vietnam War and Operation Enduring Freedom. Family. I am married with two children focused on food, family, fishing and career.”

In closing, Viray reflected on today’s diverse Army. “We derive strength from the cultures, perspectives, skills and other qualities of our personnel,” he said. “The 21st century Army is transforming into a versatile, agile force where knowledge of the battle space is crucial. Soldiers must now add to our toolboxes not only a cultural understanding of the populations in which we may be deployed, but also a better grasp of the many characteristics and backgrounds in our own formations. The theme ‘Unite Our Vision by Working Together’ means bringing who you are and what you love into the organization.”

Following the speech and closing remarks, community members were invited to a luncheon to enjoy a variety of different foods representing a diverse and geographically widespread group of Asian and pacific cultures.

To learn more about Asian American and Pacific Islander history and the May observance celebrating their cultures, art, literatures and music, visit https://asianpacificheritage.gov/

ABOUT THE U.S. ARMY COMMUNITY IN ANSBACH
The U.S. Army Garrison Ansbach (USAG Ansbach) Military Community is located in the Franconian region of Bavaria and is spread across six sites and nine kasernes dispersed around the city of Ansbach and the village of Illesheim: Barton Barracks, Bismarck Kaserne, Bleidorn Kaserne, Franken Kaserne, Katterbach Kaserne, Oberdachstetten Training Area, Shipton Kaserne, Storck Barracks, and Urlas Kaserne. Today, Ansbach is the home of the 12th Combat Aviation Brigade (12th CAB), the community’s largest tenant unit. USAG Ansbach continues its mission of streamlining base support operations management, allowing tactical commanders to concentrate on their essential training and missions. The garrison takes pride in its support to more than 6,000 Soldiers, civilians and family members working and living within the USAG Ansbach area.

To learn more about the people and facilities of the U.S. Army Garrison Ansbach (USAG Ansbach) and the people they support in Ansbach, Katterbach and Illesheim, visit the community website at www.ansbach.army.mil