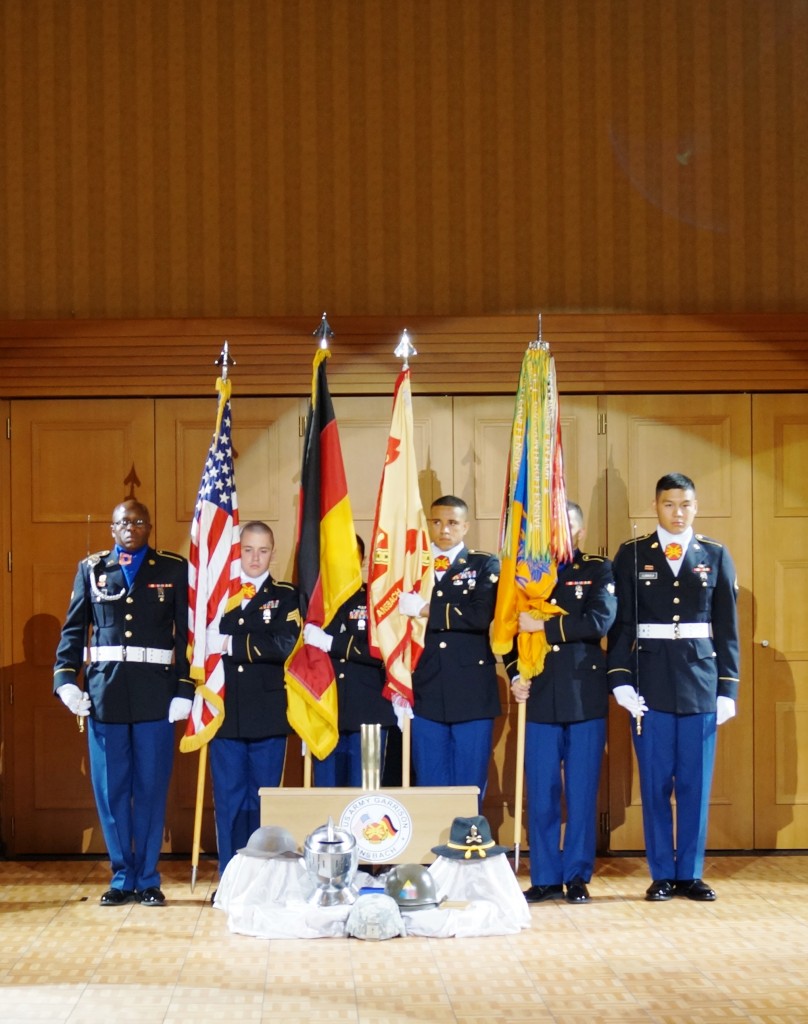 Ansbach, Germany (July 27, 2015) — When Sgt. Dalal Ogla, U.S. Army Garrison Ansbach Better Opportunity for Single Soldiers president, first approached Command Sgt. Major Mark Kiefer about hosting “some kind of formal event to recognize single Soldiers,” she was surprised when he not only thought it was a great idea, but also challenged her to turn it into a formal military ball and invite BOSS Soldiers from other garrisons around Europe to participate.

After long weeks of preparation, practicing for color guard and other military traditions, and lots of planning for program details, the event finally took place in the General Patton ballroom of the Edelweiss Lodge and Hotel, owned by Armed Forces Recreation Centers in Garmisch-Partenkirchen, Germany July 11.

The event motto “Passing the Traditions from One Generation to the Next” reflected the intention of Kiefer in many ways. “I saw it as an opportunity, as a senior member of the community, to pass on some of the traditions, protocols and etiquette that makes up the military; I used it as a learning event,” said Kiefer.

Kiefer opened the event by reading a presidential message to the audience that called single Soldiers “essential links” in an “unbroken chain of heroes.”

The agenda of the ball included many military traditions, like the posting of the colors by a color guard, the table for the fallen comrade, the toasting and cake cutting, and the grog. The word grog originally referred to a drink made with water or “small beer” (a weak beer) and rum. Now each ingredient refers to a historic war, such as the American Revolutionary War or the American Civil War.

The guest speaker was Command Sgt. Major Lynice D. Thorpe from USAG Stuttgart. She spoke about motivating younger Soldiers and teaching them to adapt to the changes in the Army.

The youngest Soldier present, Spc. Soloman Nicklas from USAG Ansbach, had the honor to cut the ceremonial cake together with Kiefer and Thorpe.

Ogla considers the formal ball a good opportunity to recognize single Soldiers and give them a sense of ownership.

“It was a good way to mentor them and pass on the Army’s traditions from one generation of Soldiers to the next,” Ogla said.

Kiefer expressed his pride in Ogla and her team of organizers for successfully planning and conducting their first BOSS formal military ball.

“It was as refined, dignified and professional as any formal military event I ever witnessed or participated in,” Kiefer said. “It is an absolute credit to those Soldiers who put it together, I couldn’t be more proud of Sergeant Ogla and her team.”

To see the story as it appears through the Army News Service, visit http://www.army.mil/article/152860