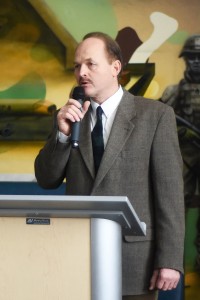 ANSBACH, Germany (March 3, 2016) – U.S. Army Garrison Ansbach kicked off its Army Emergency Relief campaign March 1 at Katterbach Kaserne’s Wings of Victory Dining Facility, during which the garrison’s AER officer described how the program is now more accessible than ever.

John Hartman, AER officer for USAG Ansbach, talked about the program, how it’s changed over the years and how it benefits Soldiers today. Hartman was joined by a table of AER unit representatives.

Every year, installations throughout the Army host their own campaigns to educate the force about how to give to AER and how to use it.

The campaign runs now through May 15, but that time frame does not limit when Soldiers can seek help, nor when people can donate to the program.

The Army introduced AER in 1942 to help Soldiers with problems that were limited to what Hartman called “dire emergencies” that neither the Army nor the American Red Cross had been previously equipped to handle.

The program, which has provided more than $1.7 billion to Soldiers and their Families to date, is now able to help Soldiers with a wider range of financial needs than ever, including rent and mortgage payments, food, medical and dental costs, funeral expenses, vehicle repair and home repair – all through either interest-free loans or grants. Emergency travel, a longstanding reason to seek AER assistance, remains a top financial need.

One big change that Hartman covered during his remarks came about in 2014 when AER headquarters decided that Soldiers in paygrades E-5 and above should no longer require command approval when seeking help through AER.

Then, on Sept 9, 2015, AER expanded this to include Soldiers in paygrades E4 and below. This change does come with certain eligibility restrictions, such as Soldiers in initial-entry training or those with less than 12 months of service.

Although word of this change was slow to spread throughout the Army, Hartman said, Soldiers have already visited his office to use the program directly.

Another change is a move to an online application process, which Hartman said is being worked in phases. The first phase, he said, is scheduled to take effect April 1 when Soldiers should be able to fill out part of their AER applications online. An online-only application process is tentative and still being discussed at AER headquarters, he added.

A third change, which is not as recent but may not be a widely known offering, is eligibility for retired Soldiers.

“AER has realized that retirees need assistance,” said Hartman. “It’s something they’ve made easy. If you’re a career Soldier, you have AER for life. That means once you leave the Army, everything AER does for you now AER will do for you when you’re a retiree.”

To learn more about the program, visit http://www.aerhq.org/dnn563/ or www.ansbach.army.mil/DirectoryA.html#ACS.

To read this year’s tri-signed letter on AER, click on the image below. 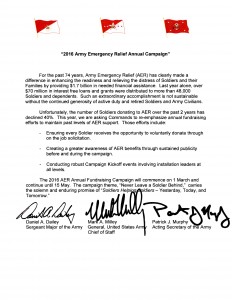