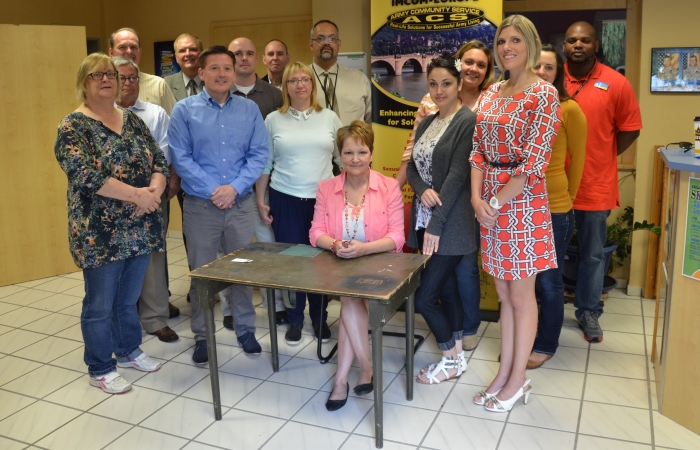 ACS invites the USAG Ansbach community to the no-cost event to enjoy barbecue, music, games for Families, a bounce house and more.

“We’re half a century old,” said Joe Lanier, mobilization and deployment manager for Army Community Service. “Come celebrate with us.”

Lanier invited community members to show up to the event hungry. In addition to providing food for its participants, the event is meant to provide knowledge about the history of ACS and what ACS does.

The formation of ACS grew out of the need to establish a “flexible framework for the operation of a viable system of social services,” according to a history of the service on the U.S. Army’s Family and Morale, Welfare and Recreation Programs website. Prior to ACS, Army spouses provided the social services in the form of nurseries, lending closets, assisting in emergencies, training the inexperienced. Often, however, a service would disappear with the absence of the family member/originator. 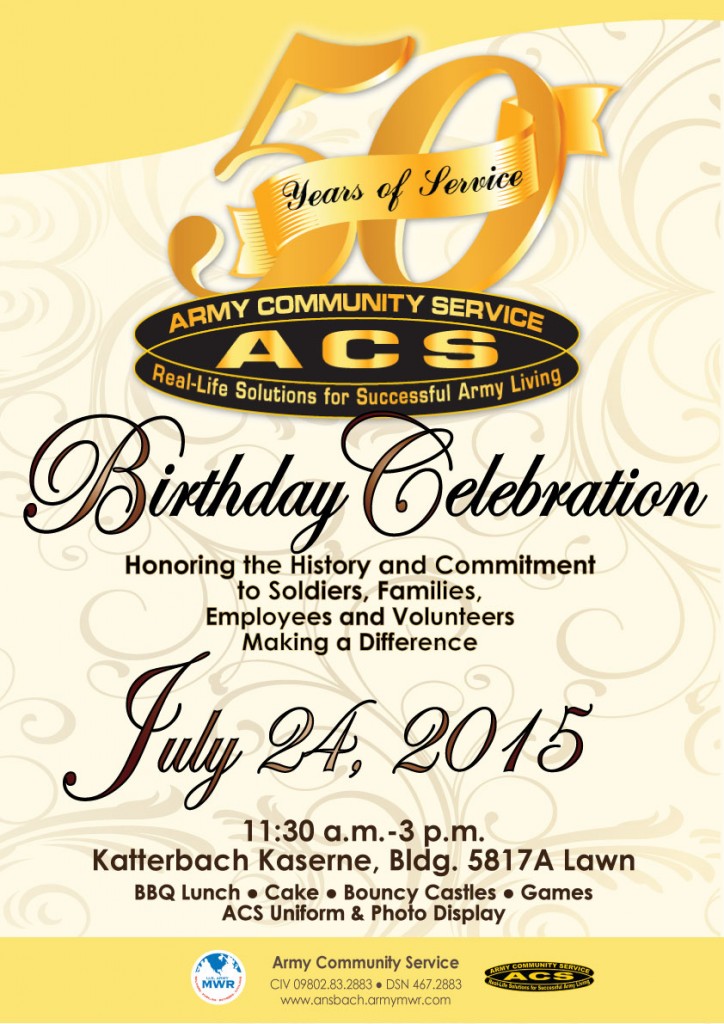 Army Community Service at U.S. Army Garrison Ansbach is set to celebrate ACS’s 50 years of service with a “birthday party” Friday, July 24 from 11:30 a.m. to 3 p.m. at the garrison’s ACS headquarter building lawn at Katterbach Kaserne.

The purpose of the centers was to “establish a centrally located, responsive, and recognizable service to provide information, assistance, and guidance to members of the Army community in meeting personal and family problems beyond the scope of their own resources” as well as to reduce organizational time in dealing with “complex personal problems” and to aid Army career satisfaction and retention, according to Army Regulation 608-1, which outlined ACS’s establishment and operation at the installation level. The regulation outlined ACS’s role as “supportive, educational, and advisory in nature.”

Throughout its 50-year history, ACS, which began as one program, grew to encompass many different programs. Today, the service oversees the Army Volunteer Corps, the Exceptional Family Member Program, Relocation Readiness, Survivor Outreach Services, Family Advocacy, and more. The Army Family Action Plan, since its establishment in 1983, has focused on 695 issues that have helped enact 128 pieces of legislation, 186 Army and Department of Defense policy changes, and 210 improvements to programs and services. The Victim Advocacy Program has supported victims of domestic violence and sexual assault through non-clinical advocacy services. The Employment Readiness program has helped Family members, Soldiers, wounded warriors, retirees and Army civilians find employment.

Army Community Service at Ansbach has been busy as well, evident in its efforts in the community so far this year. ACS put together the Relocation Assistance Fair in February at the Urlas Exchange mall to gather relevant community agencies to help new and departing community members with their recent or upcoming move. In April, USAG Ansbach’s Family Advocacy program, in collaboration with the Ansbach Spouses’ and Civilians’ Club, hosted a community baby shower, which gave new and expecting parents a venue to learn what services were available to them and an opportunity to win raffle prizes like baby toys, books of child-rearing advice, and diapers arranged to look like multi-tiered cakes. Volunteers at USAG Ansbach, under the coordination of the ACS’ Volunteer Corps, donated 33,136 hours between April 2014 and March 2015, which ACS recognized in a ceremony in April 2015.

These big events are in addition to the services the USAG Ansbach ACS regularly provides.

“ACS builds an adaptable community where service members and Family members can be prepared for stresses,” said Lanier. “We serve you in all types of ways.”

Lanier went on to say that when an issue falls outside ACS’s purview, it would also refer a customer to an organization that could help, such as another garrison directorate or to a partner agency such as American Red Cross.

The ACS also works with on-post Family readiness groups, both through coordination and training, according to Lanier.

To honor the heritage of ACS, Lanier tracked down, procured, and put up for display examples of the original ACS uniforms and insignia that workers wore during the 1960s. They are on display now in the Katterbach ACS lobby and are to be available to view at the birthday event Friday.

Additionally, the organizers of the event seek to make the event “green,” by setting up a recycle station and, with the help of the Environmental Division of the Directorate of Public Works, educating community members on the correct recycling procedures in Germany.