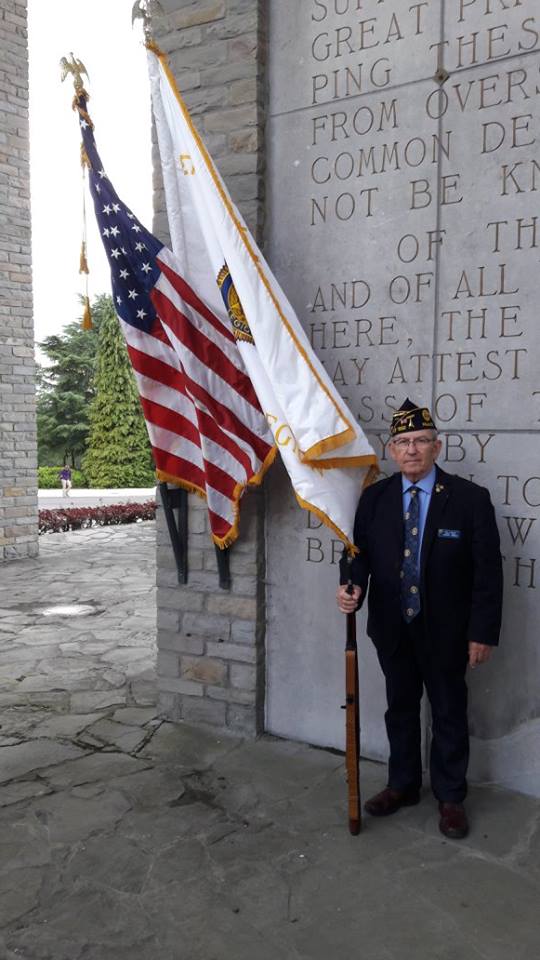 ANSBACH, Germany (July 20, 2016) – The Department of France, the American Legion organization that oversees 31 American Legion posts throughout Europe, presented five awards June 18 to the members of American Legion Ansbach Post 1982 during the department’s most recent annual convention held June 16 through 19 in Belgium.

The American Legion is the largest veterans service organization in the U.S. The Department of France covers AL posts in France, Belgium, Denmark, Spain, Ireland, Portugal, Italy, the Netherlands and here in Germany.

American Legion Post 1982 is one of several private veterans organizations in the Ansbach area, including Veterans of Foreign Wars posts 10708 and 934.

The department hosted this year’s convention near Bastogne, Belgium, which is known best to American veterans as the site of the Battle of the Bulge during World War II. Special guests of the convention included Helen Patton, granddaughter of Gen. George S. Patton, and filmmaker Martin King, who produced the documentary Searching for Augusta: The Forgotten Angel of Bastogne.

Awards included Large Post of the Year for the second consecutive year, Commander of the Year and Membership Chairman of the Year.

“I was just floored when we got the awards,” said Chris Buchanan, who was named this year’s Membership Chairman of the Year. “We received a ton of them. It was great to receive all that recognition for all our hard work that we’ve done down here in the Ansbach community.”

Buchanan attributes the honors to the post’s work in the community, fundraising for scholarships, volunteering during community events, and keeping a healthy membership base of 115 percent. He added that Post 1982 also took the lead in hosting a quarterly department executive committee meeting for leaders from all of the posts in Europe right here in Ansbach.

“In the last three years or so, we really got involved in the community more than we had been, and I think that’s why we got all of this – because of all that our members did for the community,” said Ken Aungst, Post 1982 commander and 2016 Commander of the Year. “They step right up and get it done.”

To put the post’s recognition in context, Buchanan said receiving awards at this level is equivalent to receiving them at the state level in the U.S. Winners in certain categories will go on to compete at a higher level with the American Legion, but Aungst said that’s not the focus for members of the post.

“I feel good about it because I think our post has an outstanding bunch of people who put all the effort they can into it,” said Aungst. “It’s not about awards for us; it’s about what we do in our community to support our community, and our Soldiers and their Families. We don’t go after awards. We try to do our mission and do what we can for our garrison.

“It’s all about the community and giving back what we have gotten as veterans,” Aungst added. “That’s what I do: I’m giving back some of what I got over all those years. That’s how I feel about it.”

To learn more about veterans service organizations in the Ansbach area, visit www.ansbach.army.mil/RetireeVet.html.