American by birth, Franconian by choice 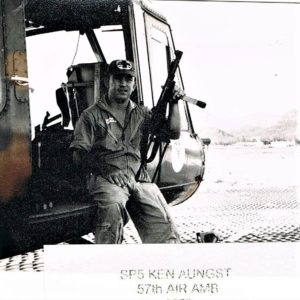 Nov. 2, 2021) – Kenneth Aungst, who first arrived in the Ansbach in 1955, fell in love in and with Germany and made it his home away from home – forever. Marrying a German woman made him a member of the German community, but his heart always stayed true to his fellow Americans and Service Members.

Aungst has spent the last 66 years in the Illesheim area of USAG Ansbach. He first came to Illesheim in 1955 straight out of basic training and was stationed at the U.S. Army Airfield as a helicopter mechanic. He enjoyed the area and a certain guesthouse in Bad Windsheim, where he met his future wife Marga, the innkeeper’s daughter.

In order to stay in Germany, Aungst transferred to Wertheim, an installation ab out 50 kilometers away. Quite a commute in those days, as Aungst says. He had to leave at 3 a.m. to be there in time for morning formation and did not come home until 9 p.m., only to fall into bed dead-tired and do it all over the following day.

In 1962, Aungst deployed to Vietnam for the first time, but was able to return to Illesheim after one year. He often remembers that his daughter Barbara, who was only 18 months old when he left, did not recognize him when he returned a year later. There were two more tours to Vietnam in the years 1967 and 1968, during the so-called Tet phase of the Vietnam War.

Aungst experienced many traumatic moments during those two deployments that manifested inside him. He remembers one incidence, when he allowed fellow soldiers to ride along in the helicopter, which later was shot down. The two soldiers died. “If I would not have let them on, maybe they would still be alive today,” he mourns.  Another time he had to watch a sergeant get shot and killed right next to him.

After coming home to Illesheim after the third tour in Vietnam, Ken had to overcome the horrific experiences of the war without any help. He explains: “I just threw myself into work immediately after coming home. I didn’t even take leave. I stayed busy and worked all day, every day.” He is convinced: “This was my way to solve my trauma – and by the way have I have not drank a drop of alcohol since, either.” 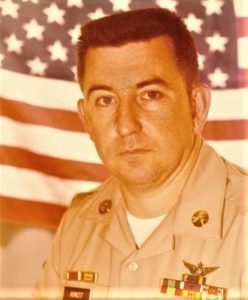 Work never ended for Aungst, since he was expected to help out at his wife’s guesthouse and the small farm they owned. Having been raised on a farm himself, this was familiar territory.

In 1980, Aungst retired from active duty and remained in the Illesheim area. He continued to work for the U.S. Army in several positions, as the AAFES shoppette manager and as postmaster for Storck Barracks.He continued to work, even when his wife fell ill. He managed his day time job at the post office and then went home to take care of his wife.  Shortly after he decided to retire to look after Marga full time, she passed away after 54 years of marriage. 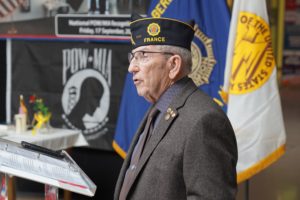 ed the loss of his wife, and for the first time really struggled with life in general. But once again, he found a purpose. He joined the American Legion Post 1982 and quickly found out the many ways this organization serves the local community. He acknowledged, “the American Legion gave me a purpose as a human – a feeling that I could help somebody.”

Today, Aungst is the community model for a person who stays young by staying active and dedicated through his engagement with the American Legion Post 1982. He currently serves as post commander for the fourth time.

“I started giving to my community, to the Scouts, to the school. There are some forgotten people over here in Europe. It became my mission to remember them,” said Aungst. “It really is like a family. What the American Legion is doing for the families is so important.”

He is considered a community icon in the Ansbach military community, the go-to person at any time. When the community is looking for volunteer time and resources, they turn to him. He is the personification of institutional knowledge and source of creativity for fundraising methods and ways to serve the community. 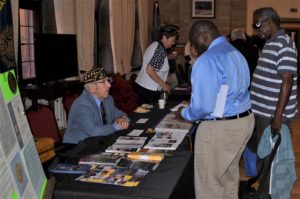 “I feel good about it because I think our post has an outstanding bunch of people who put all the effort they can into it,” said Aungst. “It’s not about awards for us. it’s about what we do in our community to support our community, and our Soldiers and their Families. We don’t go after awards. We try to do our mission and do what we can for our garrison.”

Aungst and his fellow Legion members are present at many events throughout the year at USAG Ansbach., He brewed coffee and provided snacks at every COVID-19 vaccination drive of the garrison. He also organized an annual recognition ceremony for veterans on Veterans Day, marks responsible for the Memorial Day wreath, staffed the booth at the Independence Day celebration and helped out during the Best Warrior competition, to name only a few of the many occasions, where he donated his time.

With his dry humor and his never-ending energy, he earns the res 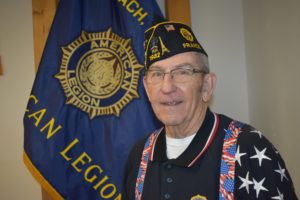 pect, support and friendship from community members throughout the Best Hometown in Europe.

Aside from his engagements within the military community, Aungst is active in his German home of Bad Windsheim. He recently pledged €2,000  for the restoration of the War Memorial. After all, he is a Franconian veteran.