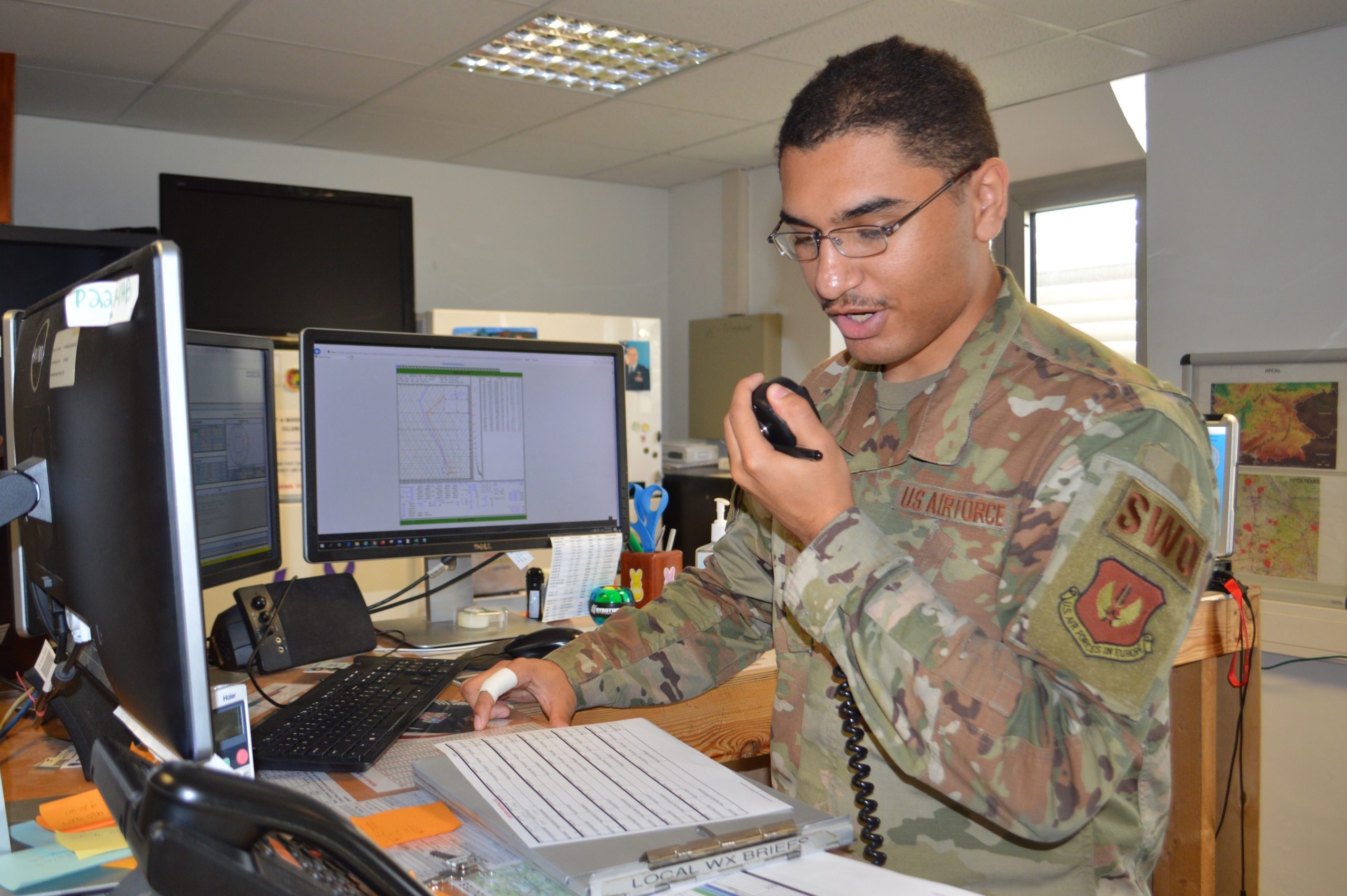 Story and photos by Dani Johnson

KATTERBACH KASERNE, Germany (Jan. 28, 2021) – Knowing the weather for the day is important to many. To the aviators of 12th Combat Aviation Brigade, it is crucial to mission success.

The Airmen of Detachment 4, 7th Combat Weather Squadron provide that critical information for the Griffin brigade.

“We provide weather briefings for all the aviation assets here at Katterbach Army Heliport,” said Air Force Tech. Sgt. Jeremy Farr, NCO in charge of Airfield Operations. “Any helicopter launching from the airfield receives weather warnings and advisories for a five nautical-mile radius of the airfield, in addition to conditions en-route and the final destination.”

The mission of the detachment is to provide decision-grade weather intelligence and combat-credible forces to the 12th CAB. “We have nine Airmen assigned with normally one deployed to eastern Europe,” said Farr. “(As the only Air Force personnel assigned to Katterbach) We do get looks when we are out, people turn and do a double take when they walk by.”

The Army does not have a weather capability which is why the Air Force provides it at most echelons.

An Air Force forecaster moves forward with the brigade when they go to an exercise, to the field, or deploy in support of real world operations. Every day that flight operations occur on Katterbach, the forecaster for the day comes in before sunrise and produces the mission execution forecast which encompasses the local helicopter flight zones spanning 20-30 miles out from the airfield.

According to Farr, they also produce a 30-hour TAF (terminal aerodrome forecast) for Katterbach, facilitate briefings for the brigade staff and battalions executing weather sensitive missions while also relaying and responding to pilot to metro transmissions from aircraft that need assistance. This support continues well after the sun sets.

“With the amount of aircraft flying, deployments, and generally bad weather that occurs specifically in the winter, there’s enough happening on a daily basis to keep you busy,” he said. “So that’s a positive for being Army support in Europe.”

“They (the Army) fly quite a bit more than the Air Force does from my experience,” Farr said. “They need to be updated every 90 minutes prior to takeoff because weather affects rotary aircraft significantly more than fixed wing.”

“Targeted, hourly weather patterns in Bavaria can have significant impact on our ability to fly safely, and the ability of our pilots to have in-person conversations with dedicated weather personnel is critical to enabling our mission,” said Col. John Broam, commander, 12th CAB.

The detachment reports to the 7th CWS located in Wiesbaden.