The closure is a result of the Aviation Restructuring Initiative announced in April, which is reducing the number of 12th Combat Aviation Brigade Soldiers by 1,900 and consolidating the remaining Soldiers and resources into the Ansbach area from Storck Barracks in Illesheim.

IES held its closing ceremony and final awards ceremony Wednesday in the school’s gymnasium and auditorium, as its students, teachers, staff and administration bid farewell to the garrison and the surrounding community after more than five decades of operation and after helping educate nearly 12,000 students.

The school joins Rainbow Elementary in closing, having held their own closure and awards ceremony the day prior at Barton Barracks. All elementary students here next school year are now slated to attend Ansbach Elementary School at Katterbach Kaserne.

After an awards and recognition ceremony that included students, teachers and members of the Parent, Teacher, Student Association, Principal Audrey Griffin spoke to the students with some words of inspiration.

“Every great dream begins with a dreamer,” said Griffin. “Always remember that you have, within you, the strength, the patience and the passion to reach the stars, and you are the future that can change the world.”

Lt. Col. David A. Markiewicz, USAG Ansbach executive officer, addressed the audience next, speaking on behalf of the USAG Ansbach command group and the garrison. Markiewicz called the ceremony “a momentous yet sad occasion.”

“To those who have attended this school from its creation, to the present day — the students, parents, teachers and faculty — thank you for sustaining this school for five decades,” said Markiewicz. “To the current staff, students, parents and those who have recently departed, thank you. Your enthusiasm and positive attitude have maintained a great school climate, and because of that, we will only have positive lasting memories of Illesheim Elementary School. As you move on to your next school, I encourage you to embrace what it has to offer but never forget your memories and your time here at Illesheim Elementary School.”

Dr. Elizabeth Dunham, superintendent of the Bavaria District Office for the Department of Defense Dependent Schools — Europe, was next to speak. Dunham, who is informally known by teachers and students as “Dr. Question” for her well-known model of inquiry in an effort to get students to participate as much as possible in the classroom, asked audience members to define the word “honor.” She called on two people, who defined it in their own words.

“I happen to think that the word ‘honor’ is a perfect word for us to use when we think about Illesheim Elementary School,” said Dunham. “Other definitions of the word ‘honor’ include ‘respect that is given to someone who is admired.’ Today your entire program is devoted to honoring the members of the Illesheim Elementary School family, the students, the staff, the principal, the PTSA and other supporting parents, the garrison, all of the people who have made this school the great place it has been for students. I honor you and all that you have done.”

At the behest of Dunham, Doug McEnery, assistant superintendent of the Bavaria District Office for the Department of Defense Dependent Schools — Europe, made a short, impromptu speech.

“It is a sad day, but it’s also a joyous day as we celebrate what the students, teachers and community have accomplished in this great school,” said McEnery. “It will be a sad day for us when we think next year we won’t be joining you, but I’m very proud that many of you in the DoDDS family will remain in our DoDDS family, and we’re very excited by that prospect.

“It’s been a great pleasure to see the professional collaboration and the bonding that has happened in the school for the benefit of kids,” McEnery added. “It really has been remarkable. I want to thank you for that pleasure and for all the hard work you’ve done.”

Before the ceremony came to a close, the students had the last word, which included a narrated production of song and dance. The production started two weeks ago with a written speech, but it evolved into a much more complex presentation that incorporated the whole sixth grade class and, for a few musical numbers, all of the students.

Caylen Straub and Cheyenne Whitman, who have attended IES since kindergarten, co-wrote and co-hosted the production, which was a retrospective of their elementary school experiences along with a medley of songs and student-performed dances.

“Both of us have been at this school for the last seven years, and let me tell you, it has been an amazing experience for the both of us,” said Cheyenne.

Straub and Whitman recounted positive experiences throughout the years and talked about the impact teachers have had on them during their education here, including Sarah Johnson, the pair’s current, sixth-grade teacher.

“Cheyenne and I have had many effective and positive influences, and inspirational words said

to us,” said Caylen. “As for Miss Johnson, she made one word stick to us: change.”

Friday is the last and final school day for both Illesheim and Rainbow elementary schools. Class for Ansbach elementary school children is scheduled to resume Aug. 31 at Ansbach Elementary School (Sept. 8 for kindergarten) for the 2015-2016 school year. 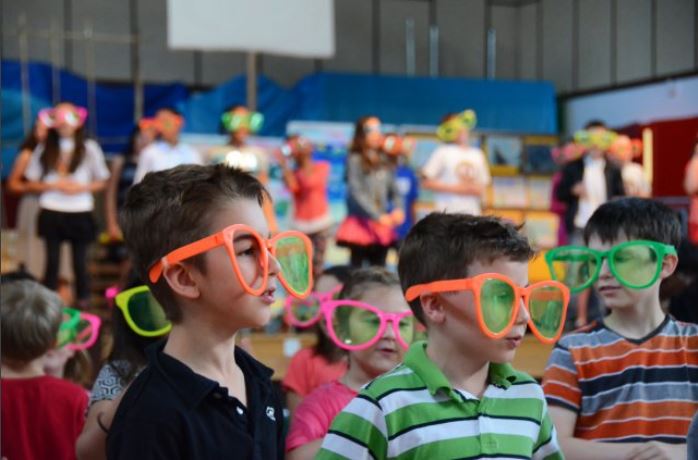 ILLESHEIM, Germany (June 4, 2015) — Students of Illesheim Elementary School don oversized sunglasses as they participate in a song and dance medley during the school’s closure and final awards ceremony in the gymnasium and auditorium June 4. The school closes after more than five decades of operation and after helping educate nearly 12,000 students. (U.S. Army photo by Stephen Baack, USAG Ansbach Public Affairs)