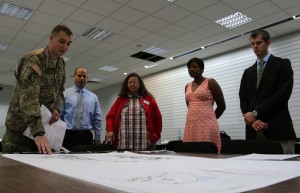 ANSBACH, Germany (Sept. 22, 2015) – Everything changes: the world, Europe, U.S. policy, Department of Defense strategy, and Department of the Army planning.

So too will U.S. Army Garrison Ansbach change.

Over the course of a few days recently, stakeholders of the USAG Ansbach community convened with a master planning team to survey and plan for the future of Katterbach Kaserne, Bismarck Kaserne and Shipton Kaserne – three sites collectively known as the Katterbach District.

“I appreciate everyone’s input and efforts into this,” said Col. Christopher M. Benson, USAG Ansbach commander. “We’re in exciting times here in Ansbach. A lot of things going on. A lot of changes are going to happen over the next several years. But we’re taking steps to control our destiny by doing things like this.”

The workshop sought to formulate an area development plan by which USAG Ansbach could make improvements to the Katterbach District infrastructure as well as accommodate new missions.

The visiting master planning team provided structure to the workshop.

After the first morning where the team set forth what they needed to accomplish over the next few days, the workshop participants broke into small groups and drove to different sites in the district to survey and evaluate existing infrastructure – particularly roads, landscaping and buildings – for their strengths and weaknesses. 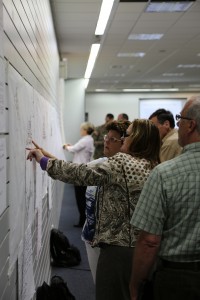 The group formulated a vision statement. Katterbach District is meant to provide “modernized, efficient and adaptable facilities accommodating a diversity of uses for working and living within a safe and secure, interconnected community supporting the enduring USAREUR and NATO missions.” From this vision statement, four goals in particular were singled out: that Katterbach District should
• have modernized, efficient and adaptable facilities
• be safe and secure
• be an interconnected community
• accommodate a diversity of uses.

The workshop broke into groups and set forth three plans based on receiving different amounts of funds. At one end of the funding spectrum was receiving funds solely for sustainment, restoration and modernization. At the other end of the funding spectrum was receiving nearly unlimited funds. One set of plans was based on receiving funds somewhere in between. The group then figured out what worked from each plan and whether the plans met the goals as laid out in the vision statement.

The team combined the best elements from each plan into one and worked that plan into three separate parts that included short-term, mid-range, and long-range plans.

As the final stage in the planning process, the group worked through making consistent regulations for the building of new structures in the Katterbach District.

Capt. Robert Kelly served as the 12th CAB liaison during the event.

“It’s been an incredible learning experience to be a part of the way ahead for Ansbach and Katterbach,” said Kelly. “We live in a dynamic world – politically, financially, socially. There’s only so much you know and can plan for, and you have to plan for the unknown.”

Maureen Goodrich, a community planner with Installation Management Command Headquarters, cited the process’s inclusivity and cooperative nature as part of its strengths.

“When someone at the installation has the ability to openly give their idea and have it validated – not just by third party outsiders but by their peers – it gives a lot of strength, a lot of credence,” said Goodrich. “So you’ll see a lot of the things that have been talked about are now on paper, they are now on a timeline.”

Pamela Klinger, an environmental planner at U.S. Army Environmental Command, saw the diverse background of its participants as a strength after the planning process as well.

“If you have people actually participating in the decision making, they own a piece of that,” said Klinger. “They’re more likely to support getting the plan secured.”

The next step in the process is when the Real Property Planning Board codifies the plan.

“There’s going to be ADPs for all of Ansbach,” said Kelly. “Participate. Participate in those other ones.”

“It’s all about making our foxhole better, making it better for the next guy, or at least giving them options to make it better for themselves,” said Kelly. “If we don’t lay the groundwork, then we’re just kicking the can down the road.”

To read this article as it appears on the Army News Service, visit www.army.mil/article/155822.