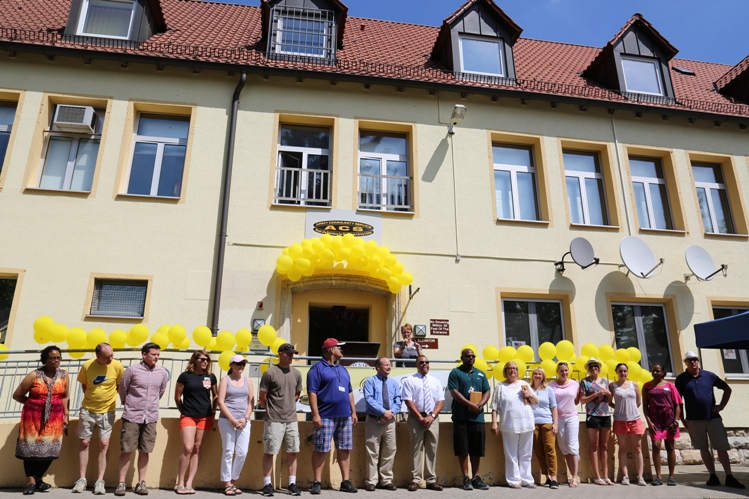 ANSBACH, Germany (July 24, 2015) — Members of the USAG Ansbach ACS staff stand together in front of the Katterbach Kaserne ACS building. The staff of U.S. Army Garrison Ansbach’s Army Community Service put together a birthday barbecue today at their location at Katterbach Kaserne to celebrate the 50th anniversary of the establishment of the Army Community Service in the Army. (U.S. Army photo by Bryan Gatchell, USAG Ansbach Public Affairs)

Army Community Service began July 25, 1965, and USAG Ansbach’s ACS used the half-century anniversary to celebrate and to let the USAG Ansbach community learn more about its staff and services.

Food preparation was set up at the gazebo. Tables, benches and awnings were spread across the lawn. Two bounce houses were inflated on the lawn. Face painters took requests from children. A disc jockey played music. Inside the ACS building was a static display of historic ACS uniforms and photos.

The Directorate of Public Works’ Environmental Division set up a teaching aid next to recycling receptacles in an effort to teach community members of Germany’s recycling requirements and to keep the event environmentally friendly.

“It’s a birthday, it’s a party, and we have very, very good weather today.”

Jones thanked the volunteers that made the event happen.

“We have some great volunteers in our community,” said Jones.

Jones outlined the history of the ACS, from before World War II through today. He detailed how Lt. Col. Emma M. Baird, a Women’s Army Corps officer who had served the Army Emergency Relief office in New York City, helped establish ACS centers throughout U.S. Army posts to provide important social services to Soldiers and their Families through a consistent framework. He also described how ACS gained several other programs under its purview during the decades.

“I am honored and flattered to be a part of this historical event,” said Jones.

After Jones spoke, Priscilla Nastasia, chief of ACS at USAG Ansbach, spoke, during which time she directly addressed her team.

“I want to thank you guys so much for everything you do,” said Nastasia. “I want to thank you for carrying the torch that was lit 50 years ago. Our services have grown tremendously, but the people working in ACS — our volunteers — have not really changed.

“Above all else, your hearts are the biggest in the world,” continued Nastasia. “You love serving Soldiers and their Families. That’s what makes working at ACS something special. We love it, and we love all of you for what you do.”

Following the speeches, three of the most enduring members of the Ansbach ACS team were recognized. Tom Jenkins and Diana O’Brien each have 13 years with ACS. Monica Hawkins has eight years specifically with the Ansbach ACS. Hawkins was unavailable for the ceremony, so Joe Lanier, manager of Mobilization and Deployment, accepted on her behalf.

Jenkins, Jones, O’Brien, and Dan Riley, director of USAG Ansbach Family and Morale, Welfare and Recreation, cut the cake with a ceremonial sword. After this, the music started back up and the children attending the event from Child, Youth and School Services queued up for the barbecue.

To read the story as it appears on the Army News Service, visit www.army.mil/article/152784.