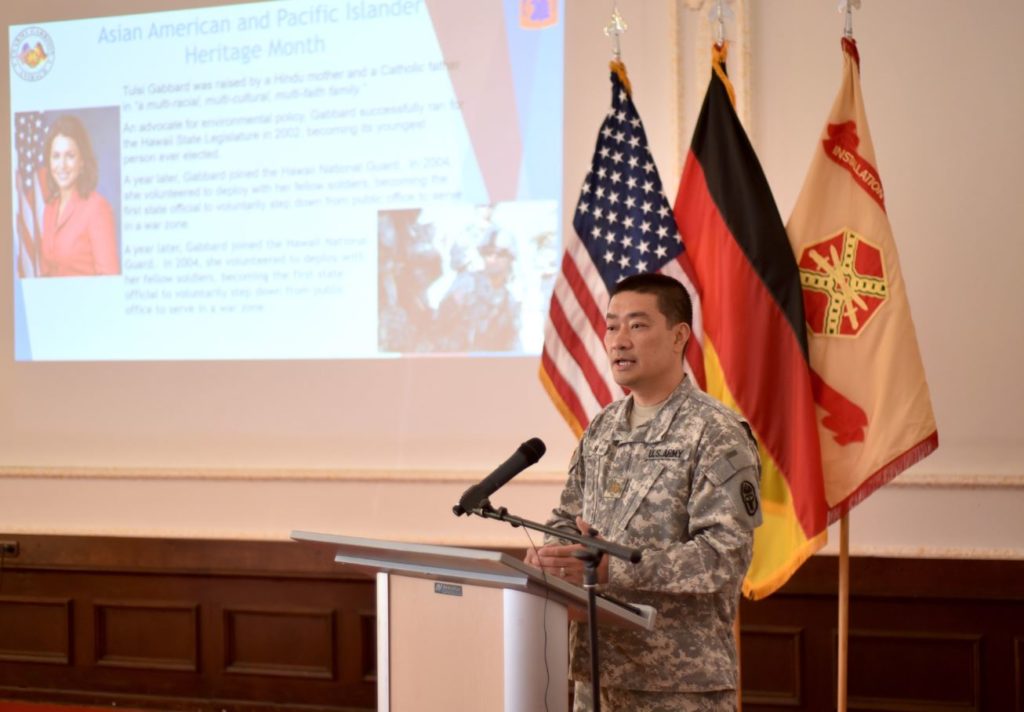 Maj. Hyunseok Chi, a native of South Korea, spoke off the cuff to USAG Ansbach community members about what he learned from immigrating to the U.S. as a young boy in 1983 with his family.

Serving as introductory speaker was Col. Benjamin Jones, USAG Ansbach commander, who opened the event with remarks about the enduring legacy of Asian-Americans and Pacific-Islanders in the U.S. military: from their acts of valor as far back as the War of 1812 to their vital contributions today in all levels of the Army.

“America’s Army remains highly capable and mission-ready by leveraging the strengths of a diverse, all-volunteer force that includes more than 57,000 Asian-Americans and Pacific Islanders,” said Jones. “They are a vital part of the legacy of professionalism, selfless service, dignity and respect, and continue this legacy today while inspiring generations to come.”

Jones introduced Chi as an example of that continued legacy.

Chi’s speech focused largely on his father’s lessons about adapting to a new culture. Chi’s father had worked with the U.S. Army as an English translator during the Korean War and was already familiar with American culture. His father taught him to embrace both.

“‘You have your heritage; you have your culture,’” Chi recalled his father telling him. “‘Keep it in your mind.’ But he said, ‘There is another culture here you have to accept and to learn to adapt with.’”

When Chi’s father heard he was joining the Army, he laughed. He said his father found the prospect that the Army would allow his son so much responsibility as a newly commissioned member of the Army to be funny.

“‘You’re going to be only four steps away from a brigadier general,’” Chi said his father had responded. “‘Well, I didn’t think of it that way, Dad.’”

His father is now 83, retired and lives in Florida, but Chi carries on his father’s lessons to his own children. In fact, this legacy is set to continue with the impending birth his new child, who is due in less than 24 hours.

“Don’t forget your roots and where you’re coming from,” Chi said as a summation of his central point. “However, it’s good to accept other people’s ways … and then enjoy.

“Life is too short not to enjoy.”