ANSBACH, Germany (May 26, 2021) – The friendship between the U.S. American Forces and their German neighbors has a long history of more than 75 years, and is still fostered and maintained by the people in the many communities that surround U.S. military installations in Germany. The dedicated individuals work hard, often behind the scenes, to enhance the stay of their American friends in their temporary hometowns and make their experience of Germany fantastic and memorable. 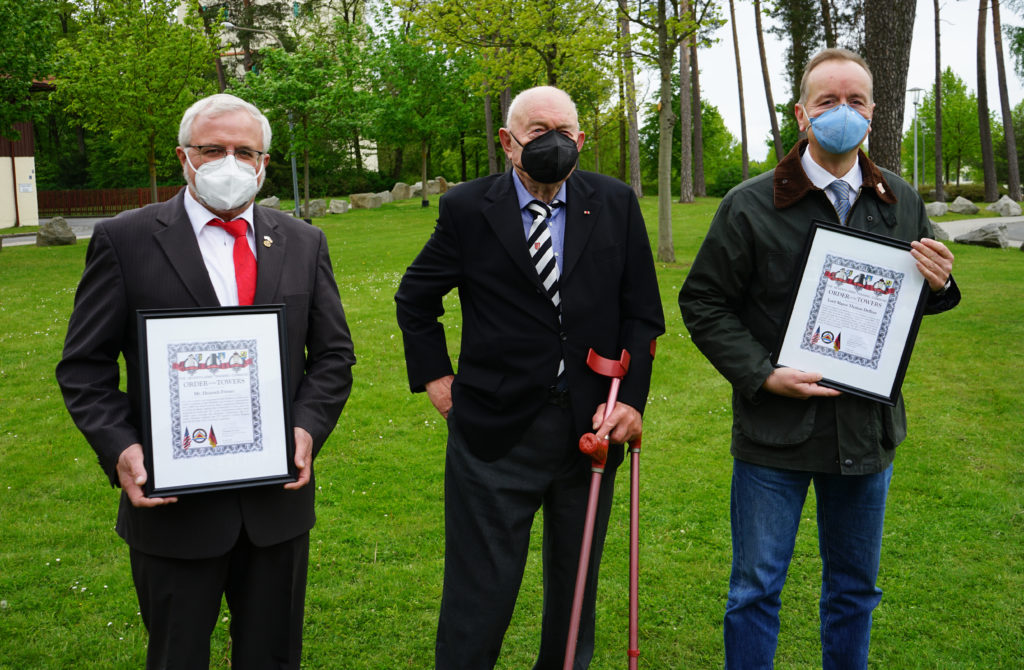 The ceremony, held in order to recognize individuals who have supported U.S. Soldiers and their families over the years, was conducted on the lawn in front of the headquarters building of 7th ATC in Grafenwöhr with the iconic water tower in the background.

“The idea of this Good Neighbor Award is a small but hopefully meaningful way to say thank you,” said Brig. Gen. Christopher Norrie, commanding general of 7th ATC.

From the USAG Ansbach community, three outstanding individuals were among the first to be honored with this award: Ansbach Lord Mayor Thomas Deffner, longtime partnership liaison Karl Balk from Herrieden and former mayor of Illesheim, Heiner Förster.

Deffner, who started his service in the city council in 2002, became a mayor of Ansbach in 2008 and in that capacity has attended many events of USAG Ansbach, representing the former lord mayor.

In his remarks, Norrie described Deffner as “the voice of reason and support for U.S. Army issues discussed during council meetings and at city hall.”

In 2020, Deffner was elected lord mayor of Ansbach, and continues to be a supportive partner and neighbor.

Balk is the initiator of the partnership between the town of Herrieden and the U.S. Army in Ansbach, which was officially signed in 1988, and is going into its 34th year. He became the official partnership liaison between Herrieden and U.S. Army Ansbach and held that volunteer office until 2017, when he passed on the position after his 80th birthday. For more than 35 years he cohosted an annual friendly marksmanship competition, a popular community engagement event between Herrieden’s marksmanship associations, the U.S. Army and the German Bundeswehr.

Förster served as the mayor of Illesheim from 1996-2020. During these 24 years, Förster was a loyal and steadfast supporter of U.S. Army units stationed in Bavaria. He hosted numerous German-American dinners, participated in countless unit functions, and facilitated the integration of U.S. Army service members and their families into the local German communities. Able to mediate between the concerns of his constituents and the training needs of Army aviation forces in Middle Franconia, Förster advocated for continued training despite complaints from local citizens regarding helicopter noise.

This initial round of Good Neighbor Awards is just the beginning; 7th ATC is planning to recognize outstanding citizens from the surrounding German communities for years to come, keeping the spirit of German-American friendship alive and well.