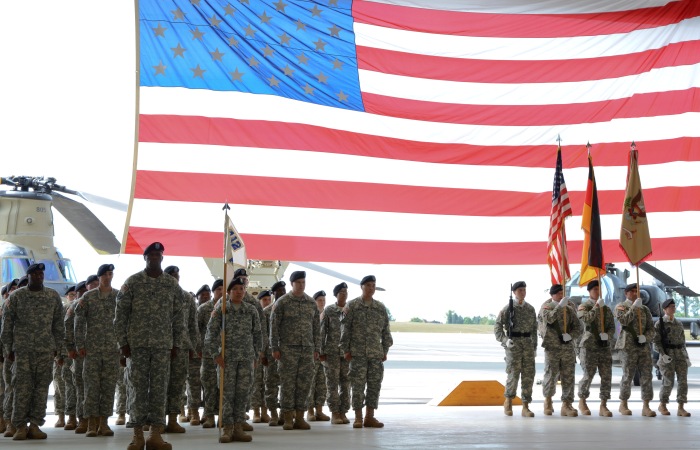 ANSBACH, Germany (July 21, 2015) — Soldiers from the 412th Aviation Support Battalion, 12th Combat Aviation Brigade, stand in formation during the unit’s inactivation ceremony at Katterbach Army Airfield in Ansbach, Germany, July 21, 2015. The unit is inactivating due to the U.S. Army’s Aviation Restructuring Initiative, which is designed to reorganize and reposition aviation assets across the Army. (U.S. Army photo by Spc. Nicholas Redding, 12th CAB)

The 412th ASB is one of the last units in 12th CAB to be inactivated as part of the Aviation Restructuring Initiative, which is designed to reorganize and reposition aviation assets across the Army. This initiative implements many cost-saving measures and allows the Army to maintain readiness and modernization across the force.

Col. Christopher W. Waters, the commander of the 12th CAB, presided over the inactivation ceremony.

“Professionals of the 412th, you truly embody the name of your organization,” said Waters. “You have propelled the 12th CAB, our U.S. ground forces and NATO allies across Europe.”

Lt. Col. David K. Almquist, the battalion commander of 412th ASB, had many praises for his battalion.

“I am extremely proud of the Soldiers who have served in this unit and humbled to have been you battalion commander,” said Almquist. “The legacy of the 412th never dies; it lives in each one of you as you move on to the other assignments across the globe.”

The 412th spearheaded multiple logistic and operational missions this past year, which supported Operation Atlantic Resolve in Eastern Europe. They also used their technical and logistical expertise during the arrival of the UH-60M Blackhawk helicopters that were shipped from the U.S. to support the rotational units serving here.

Career development of the enlisted Soldier has been a priority of the unit. Spc. Ryan W. Hairston, a Nodal Network Systems Operator for C Company, 412th ASB, spoke highly of his time in Germany.

“I came here as a private first class, and now I am a specialist promotable,” said Hairston. “I don’t think that I would have been able to accomplish that, had I not been in Charlie Company, 412th.”

The 412th ASB was created Aug. 7, 2006, and activated at Shipton Kaserne in Ansbach, Germany. The battalion deployed to support the 12th CAB during Operation Iraqi Freedom 07-09, 10-12 and deployed as a stand-alone battalion in 2012 to Afghanistan. The 412th served all five battalions within the 12th CAB and were the premier support entity of the brigade.

To read the story as it appears on the Army News Service, visit www.army.mil/article/152597.