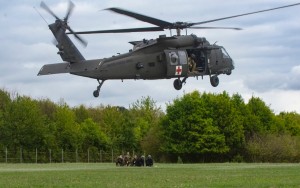 The two-day training was held to prepare the German Soldiers for their upcoming deployment to Kosovo in 2016 as the Operational Reserve Force Battalion.

The German soldiers are trained and combat-ready to deploy to Kosovo within 14 days. The mechanized infantry Soldiers do not typically wear the combat riot control, or CRC, gear worn in the exercise. That is why these Soldiers were trained by the military police to use and wear the CRC gear for future missions.

“This is one of our most experienced battalions in the German armed forces,” said Capt. Sven Scharnitzki, operations officer in charge for 401st Armored Infantry Battalion. “Most of these soldiers have deployed to Afghanistan multiple times.”

The German soldiers split into eight platoons to complete the round-robin training, which consisted of aircraft familiarization and hot/cold load training. This familiarized the Soldiers with safely entering and exiting of the aircraft while wearing the CRC gear.

“Our mission here is to support a strong unit,” said Capt. Chris Dimaio, operations officer for C Company, 4-3 Assault Helicopter Battalion. “We take every opportunity to work hand in hand with our NATO allies; we never hesitate.”

The Rotational Aviation Forces are committed to building strong relationships with our NATO allies in Europe. Each rotating unit is expected to stay about nine months. This rotation is consistent with the Army’s Regionally Aligned Force concept, aligning units to support theater requirements. Regional alignment is also synchronized with the Army’s new operational concept of winning in a complex world.

The 4-3 Assault Helicopter Battalion operates UH-60M and HH-60M Black Hawk helicopters, the newest model in the Army inventory, on missions ranging from medical evacuation, air assault operations and airborne insertions. The battalion has more than 400 Soldiers who are deployed to locations across Europe.

The 12th CAB trains and conducts Aviation Operations across the Range of Military Operation in support of United States Army Europe, European Command, and NATO, and in support of CENTCOM and AFRICOM and other contingency locations around the globe.

To read this story as it appears on the Army News Service, visit www.army.mil/article/155193.