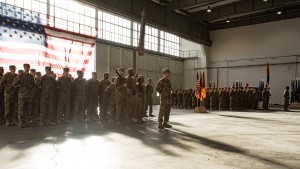 Soldiers stand in formation during a transfer of authority ceremony after a nine-month rotation. The 4-3 Brawlers transferred its responsibility to the 3-227th from Fort Hood, Texas. The rotation for these Soldiers is expected to last about nine months. (U.S. Army photo by Cpt. Jaymon Bell, 12th CAB Public Affairs)

“The hard work that you saw over the last nine months made us masters of our METL [mission essential task list],” said Lt. Col. Phillip Mazingo, Battalion Commander of the 4-3 Brawlers. “Every Soldier is better trained and more prepared to lead our military into the future.”

Through operations and sustainment, 4-3 AHB demonstrated continued support to our NATO allies, and built the framework for a continued rotational aviation presence in Europe.

“The ability to conduct aviation operations the way you did, is nothing short of spectacular,” said Col. Christopher W. Waters, Commander for 12th Combat Aviation Brigade, who presided over the ceremony. “No other battalion or task force sized element has projected combat power and assured our allies, as effectively as you have.”

Lt. Gen. Ben Hodges, commanding general, U.S. Army Europe, thanked Soldiers from Task Force Brawlers at Lielvarde Air Base, Latvia, as he was there observing Operation Arcade Fusion, Nov. 17. Hodges highlighted the fact that the rotational aviation force embodies the pillar of dynamic presence. Hodges also noted that our army rotary wing aviation is requested by our NATO allies in every exercise. Our allied partners recognize the amount of firepower and mobility 12th CAB and the rotational aviation force brings to the fight.

The incoming 3rd Battalion, 227th Aviation Regiment, 1st Air Cavalry Brigade is ready to step in and get the job done, having recently deployed in October 2006 with the 1st Cavalry Division in support of Operation Iraqi Freedom 06-08.

The Spearhead Soldiers and roughly 25 Black Hawk helicopters will be here on a rotational basis as part of the U.S. Army’s commitment to the European theater to ensure Army Europe continues to have the right capability to meet training and operational requirements. The rotation for these Soldiers is expected to last about nine months.

To read the story as it appears on the Army News Service, visit www.army.mil/article/158768.