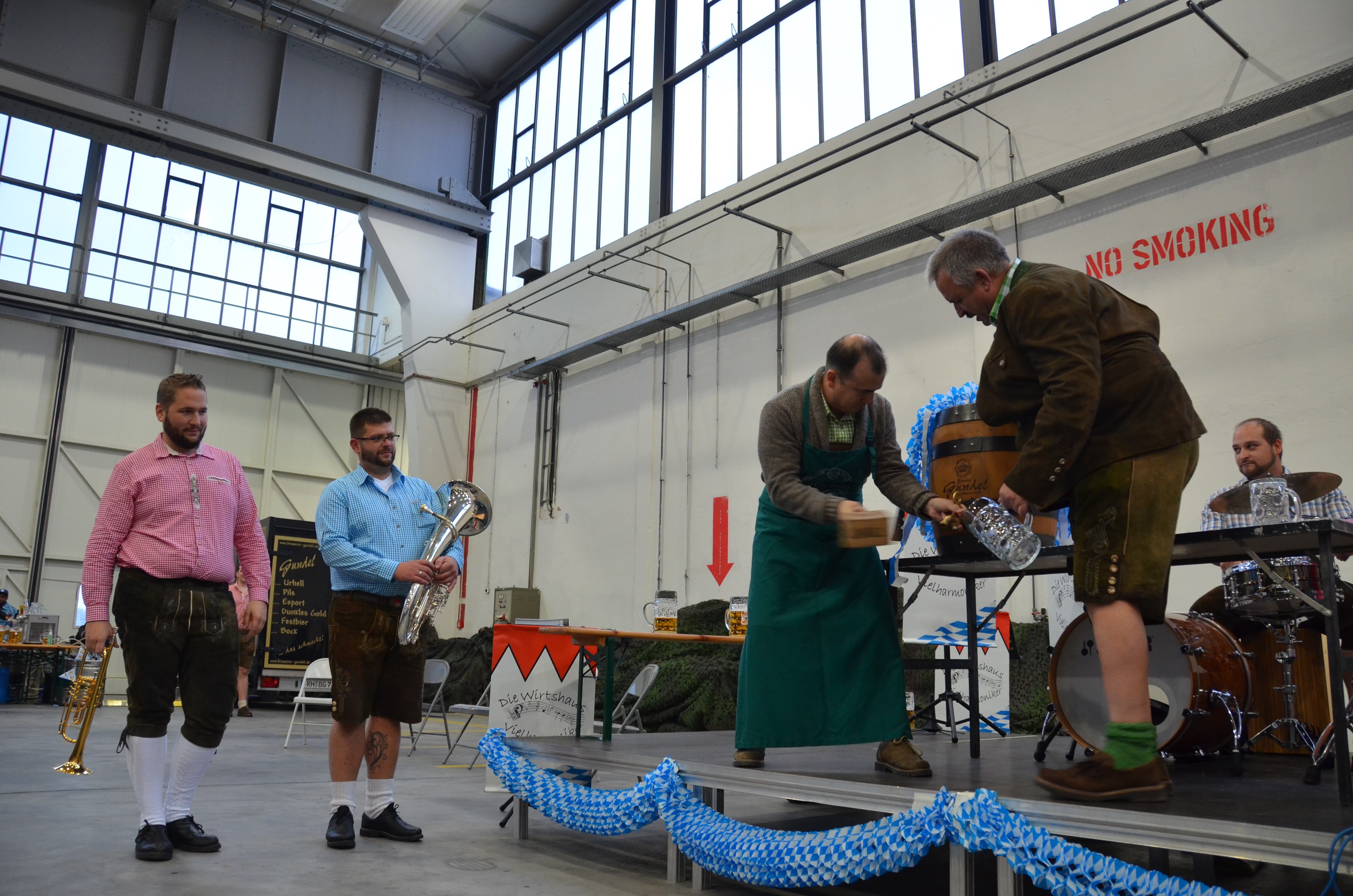 ILLESHEIM, Germany (Nov. 1, 2016) — Lt. Col. Jason Arriaga swung the mallet several times, striking the tap into the ceremonial barrel of beer. When the foam poured out, it filled the glass stein with a frothy head; the crowd of Soldiers in the hangar cheered.

“At the four-month mark, after a lot of hard work,” said Arriaga, “we’re going to take a day off, spend a full day on sports, food, hanging out.”

The 3-501st recently concluded a rotation to the Joint Multinational Readiness Center at Hohenfels, Germany, the only Army Combat Training Center outside the U.S.

The battalion spent the Saturday on intramural sports before gathering in the evening at the hangar for the fest. 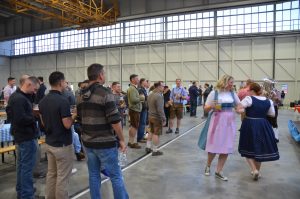 Following a toast, a band from the German army plays and event organizers in Trachten dance.

The Ansbach Spouses’ and Civilians’ Club organized the fest.

“They wanted something different from their club; they wanted to see ASCC do more,” said Kathleen Smith, ASCC’s first vice president, said of the club members. “There was a great need to do something fun for them, [Soldiers of 3-501st].

“It seems like the perfect fit to give these guys a little bit of Germany,” continued Smith.

Storck Barracks, along with the other kasernes that comprise U.S. Army Garrison Ansbach, is located in Middle Franconia, a region within the German state of Bavaria. Among other things, Bavaria is famous for Oktoberfest, the world’s largest folk festival. Millions of people from around the world attend the event in Munich, which typically takes place from mid-September into the first week of October.

“We were in JMRC during most of Oktoberfest,” said Arriaga. “Part of this is just to get us into the German / European culture and embrace where we are for the nine months that we’re here.”

“Until we get back to the United States, then we’ll have everybody back together,” said Abeln. 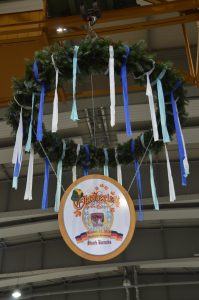 To recreate Oktoberfest in miniature in the Storck Barracks hangar, ASCC coordinated with several other private organizations for food, beer, décor, music and more. Veterans of Foreign Wars posts 9342 and 10708 and American Legion Post 1982 co-sponsored the event. Local businesses provided photography for the event, beer and baked goods. A DJ played traditional German fair music and recent pop music over a loud speaker. The hall was laid out with rows of fest benches and tables decked in the traditional Bavarian blue-and-white rhomboid check pattern. For the event, the Theater Aviation Sustainment Manager — OCONUS, or TASM-O, constructed a festive ceiling-hanging wreath for the event. A band from the Bundeswehr, the German army, played traditional fest music.

“We support veterans,” said Anthony V. Classe Jr., quartermaster and adjutant of VFW 10708. “We’re trying to help them, give them something to feel good about.”

The combined work of the private organizations helped make this event happen, according to Smith. 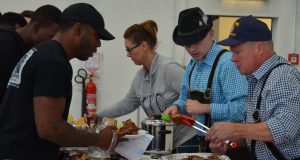 “This is a great way for us to flex our muscles, to see what POs can do,” she said. “Hopefully in the future we can do bigger and better things.”

Arriaga said the support they receive from the USAG Ansbach community — the garrison, its tenant units and its private organizations — is something they hope to return.

“We want to show everyone we’re here not only just to support Operation Atlantic Resolve but also to support the community and engage,” said Arriaga. “Even though we’re here for nine months, we feel like we’re part of the community, especially here.

“This is the new normal for Europe — rotational units,” continued Arriaga. “The sooner units come in and become part of the community, the better off everyone’s going to be.”

To read this story as it appears on the Army News Service, visit www.army.mil/article/177623.