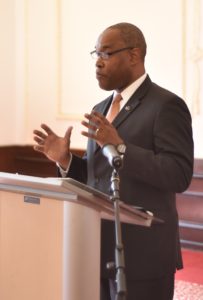 ANSBACH, Germany (Feb. 28, 2017) – As a fitting end to Black History / African-American Heritage Month, U.S. Army Garrison Ansbach community members gathered at the Von Steuben Community Center today to celebrate and pay tribute to the countless African-Americans who have contributed so much to the U.S. Army and their country, particularly in the realm of education.

Command Sgt. Maj. Osvaldo Martell, 12th Combat Aviation Brigade command sergeant major, provided introductory remarks. Martell talked about how black leaders have contributed to the U.S. military – from Medal of Honor recipient Sgt. William H. Carney in 1863, to the more recent example of Gen. Colin Powell, the first black chairman of the Joint Chiefs of Staff and the first black secretary of state, and Lt. Gen. Nadja West, who in 2016 became the first black woman to become a lieutenant general.

“These are just some examples of how African-Americans have contributed to and shaped our military today,” said Martell. “And even though we might set aside the month of February as a time to recognize the achievements of African-Americans within the Army, I encourage you to learn more.”

As one example, Martell spoke of the Army’s own feature website that highlights the accomplishments of African-Americans in the Army: www.army.mil/africanamericans.

“Even at a cursory glance at this proud history, it’s easy to see how diversity is something that unites our Army and strengthens our Soldiers to achieve the extraordinary,” said Martell.

The event’s keynote speaker was Allan Marble, who serves as the director of the Logistics Readiness Center – Ansbach. Marble talked about the importance of education and ways to address this year’s theme: The crisis in black education. This theme was put forward by the Association for the Study of African American Life and History, which founded Black History Month.

Marble began his remarks by covering examples of prominent African-Americans who excelled in their educational endeavors during “some of the most difficult times in the nation’s history.”

“While he was there at West Point, he was ostracized the entire time,” said Marble. “There are readings out there that show that Lieutenant Flipper went days at a time when another cadet wouldn’t even speak to him, but yet he still graduated in four years. It’s quite an accomplishment, and what it made me think about is how many of us could have endured being ostracized for four years, when nobody spoke to us, but could continue to excel and get a degree and go on to succeed?”

Marble earned his own commission as a quartermaster officer in 1983 after his graduation from Indiana State University. Marble expressed his gratitude to those like Flipper who helped paved the way for his own success.

“Before their sacrifices and the activism, I and others would not have been able to take advantage of these opportunities,” said Marble. “So, there is a responsibility amongst all of us to ensure that the generations behind can take full advantage of the best our nation has to offer, and education is the ladder to make that happen.”

Drawing from personal experiences and research, Marble offered his perspective on how to improve the state of education for African-Americans in the U.S. Marble focused on the importance of addressing challenges that three groups face: teachers and administrators, parents, and the students themselves.

“While there appears to be a crisis, there are also a lot of good things going on out there,” he said. “The African-American community is just like any other community in that there are issues that we need to address.

“We call it a crisis, but it’s something that we can solve,” he added. “We just have to be willing to do our part to move forward and solve the problem.”

After Marble’s remarks, Stacey Steinhoff recited a poem by Maya Angelou called “Equality,” a nine-stanza poem that declares, “Equality, and I will be free.”

Lastly, four volunteers – Steinhoff, Gwen Finley, Amy Red Cloud and Latasha Peguero – performed two songs – “Lift Every Voice and Sing” and “Amazing Grace.” Though they performed these pieces accapella, they were accompanied by the voices of fellow attendees. 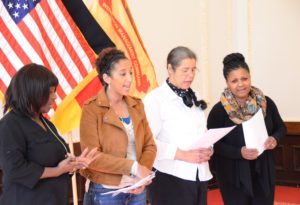