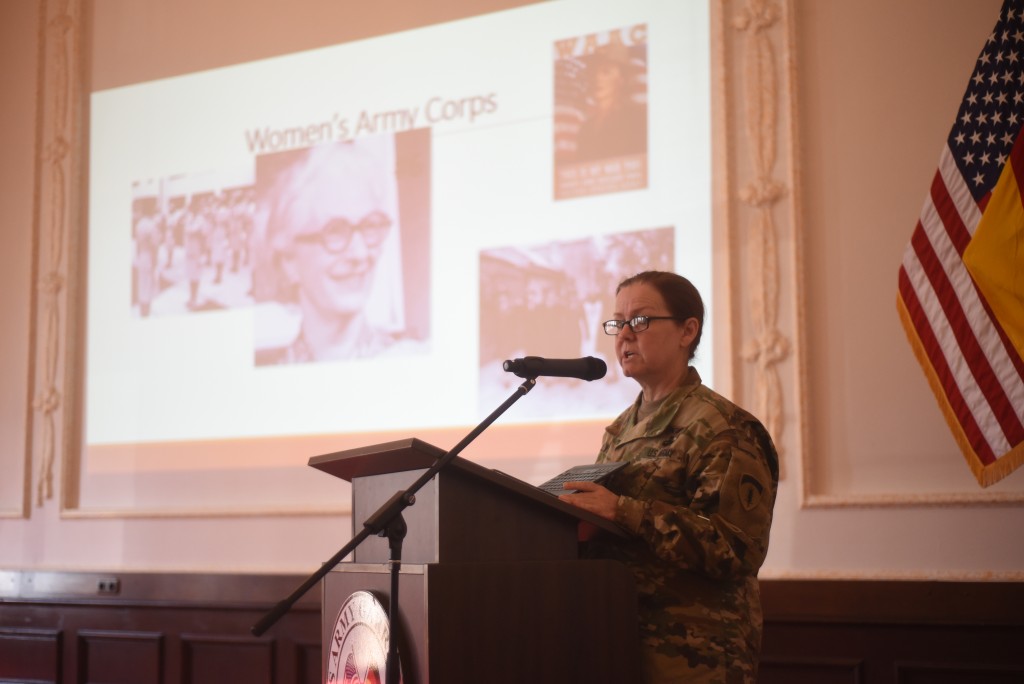 Lyon, who has served as both the USAREUR and U.S. Army NATO command sergeant major since May 2015, focused on key influential women in her remarks. In the spirit of this year’s theme – “Working to Form a More Perfect Union: Honoring Women in Public Service and Government” – Lyon highlighted 16 distinguished American women who have influenced the course of the nation through their service.

Lyon had attendees guess the names of as many notable women as possible as each of their photos appeared on the screen throughout her remarks.

“Recognizing the achievements of women in all facets of life – science, community, government, literature, art, sports and medicine, has a huge impact on the development of self-respect and in providing new opportunities for girls and young women,” said Lyon.

Bates and Hobby were two whom Lyon singled out during her remarks.

Hobby served as the first director of the Women’s Army Auxiliary Corps starting in 1942, which became the Women’s Army Corps in 1943, and the first secretary of the U.S. Department of Health, Education and Welfare. The NWHP credits her as a “one-person recruiting marathon” in her efforts of “persuading large numbers of women to take the unprecedented step of enlisting” in the Army during World War II. By the end of her time with the WAC, its members filled 239 different positions – which was more than four times initial estimates, according to the NWHP. Hobby is the first and only WAC recipient of the Distinguished Service Medal.

Bates, a black civil rights activist and journalist, is perhaps best known for her work helping to integrate public schools in Little Rock, Arkansas. Bates ran The Arkansas State Press newspaper, which was boycotted by many white business for refusing to censor stories on racial issues such as police brutality. Bates played a key role during the Little Rock integration crisis at Little Rock Central High School in the late 1950s.

“Both of these women made significant contributions to our nation’s history,” Lyon said. “I chose these two women in particular because they worked in very different spectrums of public service. Colonel Hobby helped shape the integration of women into the military, and Daisy Bates led a fight to integrate our public schools, particularly in the Midwest. Throughout history, women were provided a variety of support roles, but because of persistent and hardworking women such as this year’s 16 honorees, women have taken the lead and continue to rewrite history.”

Lyon closed her remarks by addressing those in the room, many of whom are women leaders in different fields in the Army and civil service.

“Opportunities – they present themselves every day,” Lyon said. “You have to be aware so that you can take advantage of each and every one that comes to you. It is what we do with these opportunities that sets us apart. I have been blessed in my career to have been presented with opportunities that I have seized upon and, hopefully, I have done an excellent job at. I would say that my position now is a testament to that, but we’ll see how I leave this place – hopefully better than I found it. That’s what we all strive for.

“If I were to have a dream,” Lyon added, “it would be that in the future, abilities will far outweigh gender or race or ethnicity, and the simple fact of being able to perform a job and perform it well will determine where priority is placed on hiring, positions and our future.”