The friendly competition is co-hosted and co-organized by U.S. Army Garrison Ansbach’s Headquarters and Headquarters Detachment and the city of Herrieden. Regular competitors know the event better as the Herrieden Shoot.

As in previous years, the pool of competitors was a mix of novice and expert marksmen and markswomen, Germans and Americans, and military and civilians, all firing side by side and not divided by category.

Determining the best shooter and team of shooters served as the main attraction, but nearly all competitors spent the bulk of their afternoon in a spirit of fellowship and camaraderie. 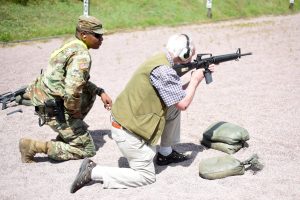