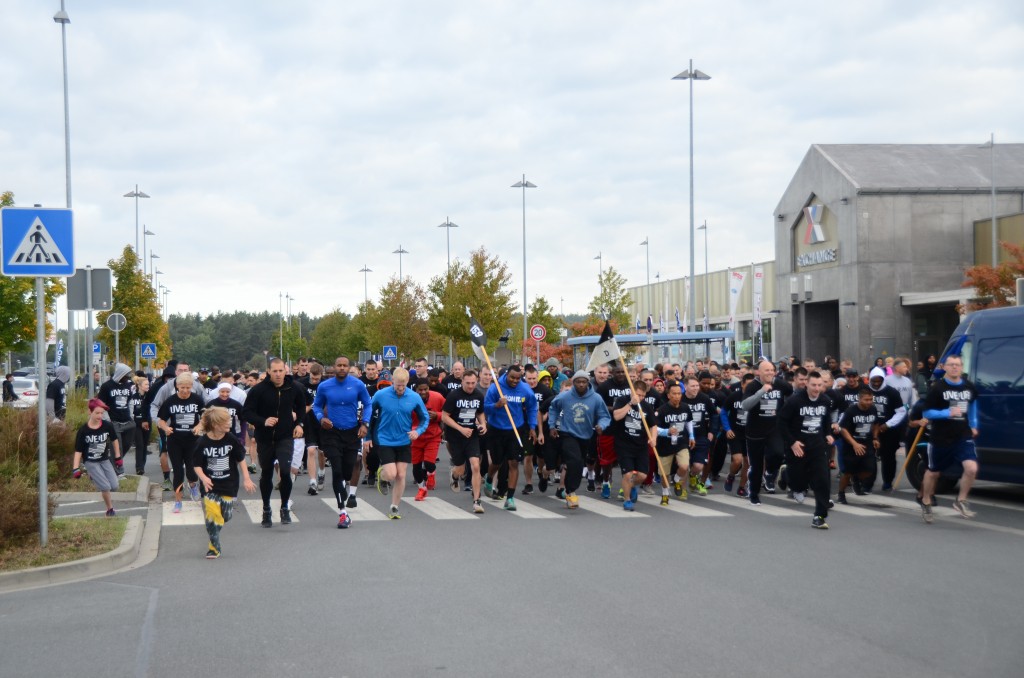 September marks Suicide Prevention Month both for the U.S. and the Army. The monthlong commemoration is one of an array of awareness campaigns the Army promotes each year, but it’s also one that had special significance for many of the people who attended this run/walk event.

“We do a lot of runs, and they all have meaning,” said Shayne Gallaway, the USAG Ansbach Suicide Prevention Program manager, speaking to the crowd before the run/walk started. “This one is very meaningful, and it’s probably meaningful for a lot of us for a lot of reasons. I think every suicide can be prevented. I think we can do that by connecting that person with at least one other person. That’s why it’s so important that you are all out here, because it’s not me that’s going to prevent them all. It’s all of you.” 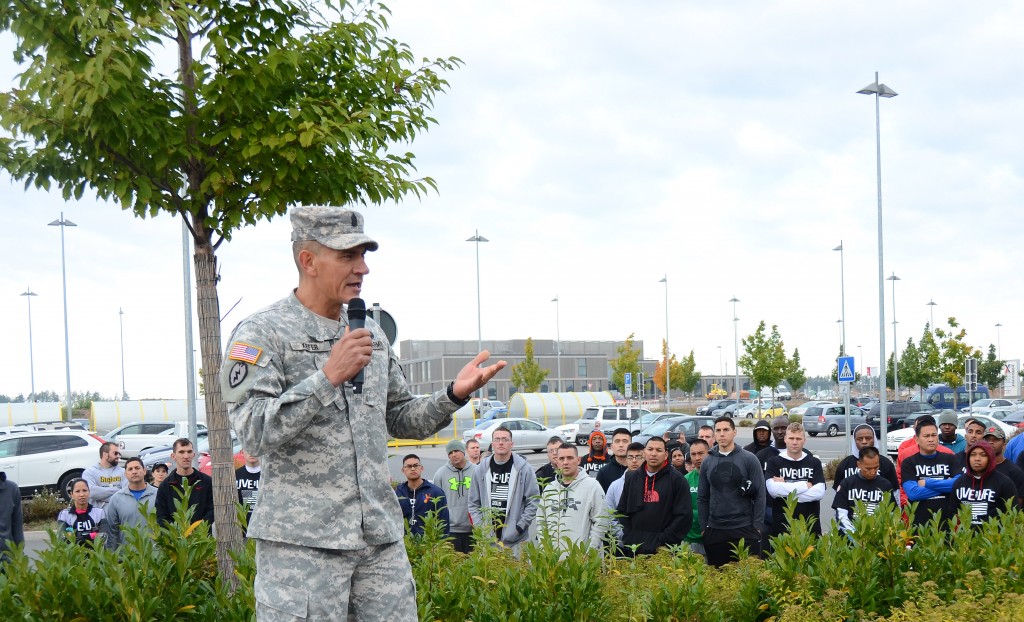 USAG Ansbach Command Sgt. Maj. Mark A. Kiefer also spoke to those gathered and presented certificates of achievement to Dr. Mary Leonhart and Staff Sgt. Miguel A. Alamo on behalf of USAG Ansbach for their entries in the poetry/essay contest that led up to the Suicide Prevention 3K Walk/Run event. Though not present at the run to be recognized, Warrant Officer Terry Flood also wrote a poem for the contest for which he received a certificate and recognition.

Leonhart’s poem, “Don’t Throw It All Away,” Alamo’s essay, “I Miss Him Most on the Holidays,” and Flood’s poem, “Suicide Prevention is Our Cause,” can all be read by visiting https://ansbachhometownherald.com/essay-poems/.

“Suicide is serious business,” Kiefer said to those gathered. “When you dedicate a whole month to it, that really speaks to its importance.”

Kiefer asked how many in the group had been affected by suicide in some way, indicated by a show of hands.

“Look around the group,” Kiefer said. “That’s a lot of people.”

Kiefer recalled an instance of a chaplain he knew who completed the act, and also mentioned one prominent military leader – Navy Adm. Jeremy Boorda, then chief of Naval Operations – who committed suicide in 1996.

“Between my battle buddy, Command Sergeant Major Kiefer, and myself, we’ve got 60 years of experience in this Army,” said Martell. “Let me tell you: We’ve seen a lot of stuff going on, and it’s the hardest thing to see a Soldier take his own life for something that could have been prevented. It never gets any easier.”

Martell said that despite the depth of one’s hardship, “there’s nothing in life that is that bad that you’ve got to take your life away.”

“If you don’t get anything else out of this run, look at your left and right and look at your buddies,” Martell added. “If you see somebody struggling, please call them to the side and say, ‘Hey, are you doing OK? Hey, everything is going to be all right.’ Everybody has challenges in life … The way I look at it, life is like a GPS. You put the direction. If you don’t like the direction you’ve got, reroute and get another route.”