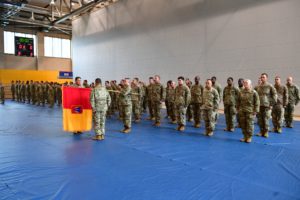 The 174th ADA, out of the Ohio National Guard, arrived in Ansbach nine months ago as the mission command element in support of the 10th Army Air and Missile Defense Command (AAMDC) as part of the U.S. Army Europe-Africa (USAREUR-AF) air defense regionally allocated force. The unit was previously in Ansbach in 2018. The 164th ADA was in Ansbach previously in 2019 and departed in 2020.

“It’s hard to believe we’ve been here for nine months,” said Col. James Mccandless, 174th ADA commander. “Our success is directly attributed to the exceptional leadership and accomplishments of the battalions and batteries to focus on accomplishing the mission.”

While in Europe, the brigade tactical command post conducted a 1,500 km tactical road march through Germany, Austria, Slovenia, and Croatia in support of Defender-Europe 21. They also oversaw the deployment to the U.S. Central Command area of operations of their subordinate battalion, 5th Battalion, 7th Air Defense Artillery Regiment (5-7 ADAR) in support of Operation Allies Refuge, the evacuation of citizens from Afghanistan.

Due to the 174th ADA integration during Exercise Saber Guardian, the 5-7 ADAR was able to conduct the first Patriot live-fire through the Dismounted Patriot Information and Coordination Central (DPICC) outside of U.S. Army White Sands Missile Range in New Mexico. The brigade also oversaw the fielding of the new M-SHORAD (Maneuver-Short Range Air Defense) Stryker vehicle to their subordinate battalion, 5-4 ADAR and the subsequent development of M-SHORAD gunnery tables.

“We appreciate the air defense artillery mission. We couldn’t do what we need to do in this theater without it,” said Maj. Gen. Joe Jarrard, USAREUR-AF deputy commanding general who officiated the ceremony for Brig. Gen. Gregory Brady who was unable to attend. “What you do for U.S. Army Europe-Africa in this theater is very, very important.” 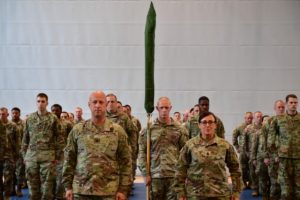 The rotational Air Defense Artillery Brigade allows the 10th AAMDC to enhance professional relationships and partnerships with NATO partners and allies and improves overall coordination during times of crisis. The Army National Guard brigades deploy to Europe for nine-month rotations as part of the European Deterrence Initiative’s regionally allocated forces and are based primarily in Germany, the unit supports various missions throughout the European theatre as needed during their rotation. These rotations are not part of the Atlantic Resolve rotations, but do often support Atlantic Resolve missions.

“The 174th ADA have completed their assignment and done a superb job. We are set up for success and we look forward to this mission,” said Col. Patrick Thompson, 164th ADA commander. “The training you completed in Florida and Texas provided you (the Soldiers) with the confidence and expertise to provide command and control to operate in the European Command area of operations. I look forward to leading the command team and assure we are all in in support of our subordinate units.”