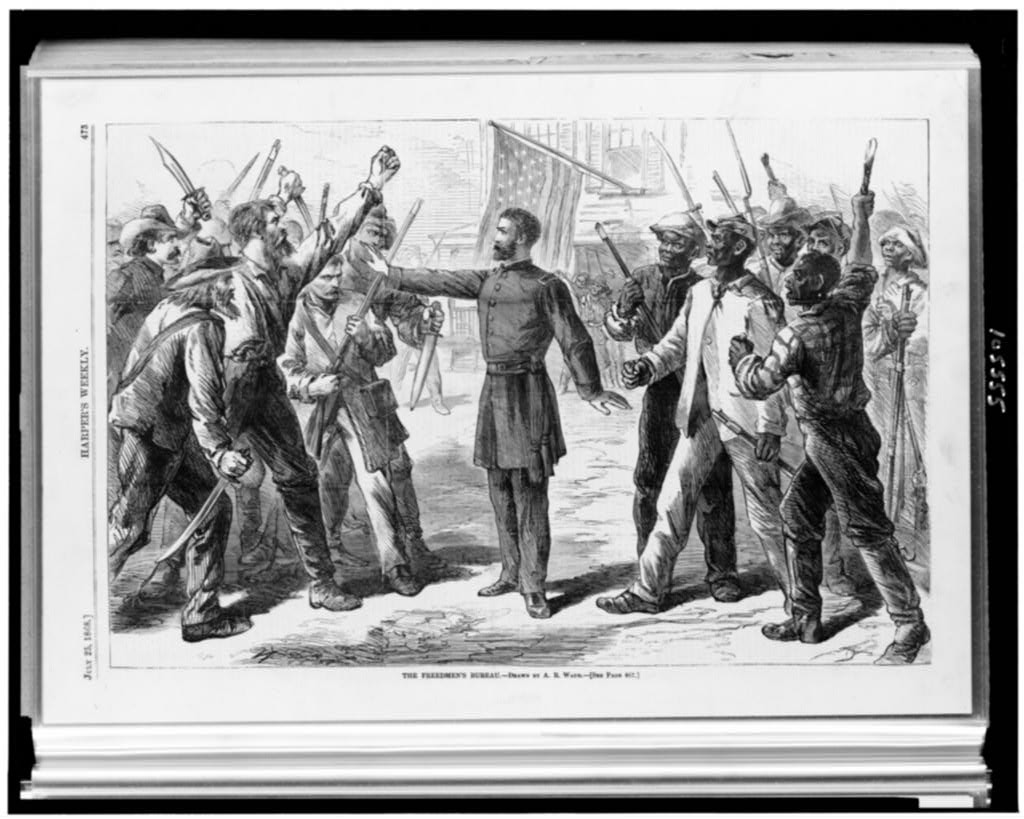 An illustration in the July 25, 1868, “Harper’s Weekly” shows a man representing the Freedmen’s Bureau standing between armed groups of whites and blacks. (Courtesy of the Library of Congress)

WASHINGTON (Aug. 3, 2015) — This year marks the 150th anniversary of the start of the Army’s first, large-scale occupation duty, following the end of the Confederacy.

To commemorate the 1865 to 1877 occupation period, the Army’s Center of Military History, or CMH, published a new pamphlet: “The Army and Reconstruction.”

To understand the Military Reconstruction Acts of 1867, which divided the South into five military districts, an understanding of the preceding two years is needed, said Mark Bradley, a historian at CMH and author of the pamphlet. The pamphlet will be online at the CMH website: www.history.army.mil/ and will also be available for purchase later this week.

After the Battle of Appomattox Court House and the surrender of Gen. Robert E. Lee’s Army on April 9, 1865, most of the fighting ended, or soon would, as word of the surrender spread.

In May 1865, there were approximately 1 million Soldiers in the Union Army. A rapid demobilization followed and by January 1866, there just 87,550 occupation troops in the South, and by October 1867, there were a mere 20,117 Soldiers.

The end of the Civil War, the freeing of the slaves, and demobilization did not usher in a period of peace and tranquility, Bradley noted. The institution of slavery and the antebellum way of life had roots that were deep.

Beginning in early 1866, Southern states began passing a series of laws and regulations, known collectively as Black Codes, which restricted the rights of blacks from voting, owning firearms and even gathering in public under certain conditions. Many were arrested for minor infractions and sentenced to involuntary labor. “It was about controlling the workforce and keeping blacks in as close to a position of slavery as possible,” he said.

Also about this time, groups known as “Regulators” started forming. The groups were basically outlaws or highwaymen, but over time, their activities took on racial overtones and the groups began harassing and attacking white unionists and blacks, he said.

In addition to the Regulators, other hate groups later formed to harass, intimidate and sometimes murder blacks and white sympathizers. Such groups included the Ku Klux Klan and the “Red Shirts,” Bradley said.

The Freedmen’s Bureau was established in 1865 to protect and educate the newly freed slaves, but the agency was disbanded in 1869 with its goals only half-accomplished.

In 1865 and 1866, the U.S. Army maintained a steadily shrinking number of posts in the Southern states. At one point, about half of this occupation force consisted of U.S. Colored Troops who had joined the Union Army. Bradley remarked that their commanders often stationed them in remote areas to mollify Southern whites.

Tensions in the South increased as time went on for several reasons, Bradley said. First, Republicans in the North pushed for states to ratify the 13th, 14th and 15th amendments, known collectively as the “Reconstruction Amendments.”

President Andrew Johnson made it a requirement that Southern states, which had seceded at the beginning of the war, could not officially return to the U.S., until they ratified the 13th Amendment, repudiated the Ordinance of Secession and repudiated their war debts, Bradley said. They would also need to rewrite their state constitutions in a state-wide convention.

These requirements did not sit well with many Southerners, especially former leaders of the Confederacy who had not received presidential pardons and had their right to vote and serve on jury duty taken away, he said.

It was especially galling for the former leaders to see blacks get the right to vote and even hold office in the state legislature and governorships, he noted.

During the 1866 mid-year national elections, the Radical Republicans were elected to a majority in Congress. These lawmakers viewed the entrenchment of Southern Democrats and racial prejudice as unacceptable, Bradley said. In addition to ratifying the 13th Amendment, they also made it a requirement to ratify the 14th Amendment in order to achieve full statehood.

Furthermore, because the radical Republicans believed that a military presence was needed in the South to maintain peace and order, they passed the Military Reconstruction Acts of 1867.

Military Reconstruction divided the South into five military districts. Tennessee was the only one of the 11 former Confederate states exempt from the occupation, as it had been the first to ratify the 14th Amendment on July 18, 1866, and it had satisfied other requirements to be readmitted into the Union, Bradley said.

The districts and the former Union commanders who led them throughout the Reconstruction period were:

At the start of the occupation, about 20,000 troops were deployed throughout the South, where they protected the polling sites and performed other peacekeeping duties. The commanders, in effect, ran the states, Bradley said, explaining that they could nullify laws passed by the state legislatures and governors if they so wished and replace them with their own laws. The commanders also had the authority to appoint and remove state and local officials.

With an Army of just 57,000, the occupation of the South put a strain on the force, as Soldiers were also needed on the Western frontier to protect settlers from Indian attacks. Over time, as more states ratified the Reconstruction amendments, the occupation force dwindled.

While the occupation didn’t prevent violence and discrimination toward blacks and their white supporters, the mere presence of the troops undoubtedly tamped down what could have been even worse violence, Bradley said.

It’s rather fortunate for the U.S. Army that warfare did not occur, Bradley commented, because most of the occupying force was composed of infantry and artillery units. There were few cavalry. The Regulators and other hate groups, on the other hand, were mounted and would have had an advantage of mobility.

Additionally, he said, the troops were poorly armed. They were equipped with single-shot Springfield rifles, not the more effective repeating rifles.

Occasionally, a beefed up presence of troops occurred, as was the case in North Carolina in 1870, when 1,000 troops were deployed to that state after the lynching of a state senator.

In the mid-1870s, near the end of Reconstruction, some of the U.S. Soldiers in the South took on a new mission. They worked hand-in-hand with the Internal Revenue Bureau, breaking up moonshine stills in western North Carolina and South Carolina, Bradley said.

The end of Reconstruction came in 1877 when President Rutherford B. Hayes made a compromise with Southern leaders. The secret deal he made with Southern Democrats gave him the number of electoral votes needed to win the presidency in return for ending Reconstruction, Bradley said, noting that by 1877, there were very few occupying troops remaining.

Looking back at Military Reconstruction, Bradley said he thinks some Army officers had very little understanding of the hate groups in the South, despite their long-term deployment there. Most thought groups like the KKK were vigilantes seeking to maintain law and order. They didn’t understand the political nature of these organizations.

One who did understand, however, was Maj. Charles H. Morgan, who learned about clandestine activities by personally interviewing the victims as well as the perpetrators, Bradley said.

After the KKK raids in Cleveland, Ohio, and Rutherford, North Carolina, in 1870 and 1871, he became convinced that Klansmen were political terrorists and not just vigilantes, Bradley said. He called in the 7th U.S. Cavalry from South Carolina to quell the riots and made some 40 arrests, including that of the Rutherford County Klan leader, Randolph A. Shotwell.

Toward the end of Reconstruction, the last of the Confederate leaders were pardoned and some went back into politics, Bradley said, citing governorships and senate seats in Arkansas, North Carolina and South Carolina going to former Confederate officeholders.

Public opinion was also changing. The Civil War was becoming a distant memory and the Panic of 1873 had people focused on the financial crisis, Bradley said.

Albion W. Tourgee, once an outspoken radical Republican, symbolized the reconciliation between North and South.

While this spirit of national unity can be seen as a positive development in restoring unity, the plight of the African-Americans was largely forgotten, Bradley commented. Not for 100 more years, when the Civil Rights legislation was passed, would conditions improve.