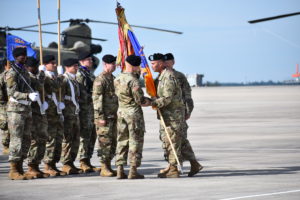 Cole commanded the 12th CAB from June 2017 until today as he passed the CABs colors to Broam. The passing of the colors is an Army tradition that symbolizes the passing of responsibility from one commander to another.

Brig. Gen. Christopher Norrie, commanding general for the 7th Army Training Command, hosted the ceremony and praised the 12th CAB’s successes while under the command of Cole.

“Ken and his team have built a unit with a reputation across Europe of ready and lethal aviators,” Norrie said during his remarks to those gathered.

“It is no surprise to me that when Commanders need aviation assets, the Griffins of 12th CAB are always their first call,” he said. “The training and aviation support they provided has directly contributed to the success of USAREUR, 7th ATC, NATO and our European partners and allies. Col. Cole and his team embody the U.S. Army’s mission in Europe.”

Commenting on the 12th CAB’s efforts over the past two years, Norrie talked about the more than 16,000 rotary wing hours logged in support of American and Allied training.

“Sixteen thousand hours, that’s over 600 days,” Norrie said. “If you think about that, Ken and his team have essentially flown continuously over Europe for almost two years.”

Norrie said the message the 12th CAB was sending to U.S. allies and adversaries was clear.

“We are a trained, ready, and lethal force who stand shoulder to shoulder with our allies and will energetically meet the enemies of our countries,” he said. “Because we are Griffins, we are better trained and will fight with all our might.”

As Norrie stepped away from the podium, Cole stepped up to address the crowd, thanking everyone in attendance. “This is truly a beautiful day to celebrate the partnership between our two great nations.”

“That partnership is vividly displayed before you today,” said Cole, extending a hand to the Soldiers of the 12th Combat Aviation Brigade as they stood on the airfield in front of several Chinook helicopters.

Cole compared 12th CAB’s journey to Apollo 11’s descent to the moon fifty years ago and the unknowns the astronauts encountered on that mission.

“We have our own unknowns, and the way we solve those is with people,” he said. “We solve problems with people, and amazing people can solve impossible problems.”

Before thanking his family and signing off, Cole quoted a passage from the Night Stalker Creed. “And when the impossible has been accomplished the only reward is another mission no one else will try,” he said. “Well 12th CAB, more missions await, and I look forward to following your future achievements.”

As the incoming commander, Broam was the last to address those in attendance.
“We consider Katterbach our second home,” he said. “This is our third opportunity in the last 20 years to serve here. As we enjoy our time in beautiful Bavaria, we look forward to meeting each of our local mayors and leaders.”

Broam also addressed the Soldiers assembled on the airfield, thanking them for their commitment and service in defense of our nation. “I want you to know I feel it is a tremendous honor to serve as your commander.”