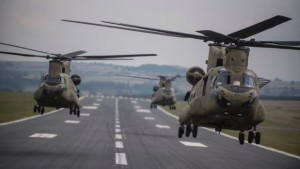 ANSBACH, Germany (Aug. 25, 2015) – The first five of nine CH-47F MYII Chinook helicopters arrived at Katterbach Army Airfield, here, Aug. 21. The MYII Chinook is the latest and most cutting-edge CH-47F platform to-date which allows pilots to fly the airframe “through the clouds” or in degraded visual environments; increasing the combat readiness of the 12th Combat Aviation Brigade.

The new helicopters also increase the 12th CAB’s freedom of movement throughout the European theater. The upgrades to the avionic instruments now adhere with European mandates for GPS capabilities in rotary wing aircraft. This ensures the 12th CAB can participate in any NATO operation and project heavy lift capability anywhere in Europe.

“It’s a step in the right direction towards the future of instrument flight operations,” said Capt. Philip J. Leathead, the company commander for Hotel Company 1st Bn., 214th Avn. Regt. “We can fly with the use of instruments integrated with the GPS whereas before we were limited with the older systems.”

The outgoing aircraft logged a substantial amount of hours during the past four years at Katterbach. These hours came from two rotations to Afghanistan and numerous NATO operations.

“These new aircraft do not require the amount of maintenance the older ones did,” said Staff Sgt. Ryan W. Azevedo, the company standardization instructor for Hotel Company, 1st Bn., 214th Avn. Regt. “The unit can actually start fresh.”

Among the many upgrades, the new cargo loading system features will provide a way to quickly load and unload cargo. “We can go from transporting cargo to passengers in a matter of minutes,” said Staff Sgt. Jason L Tabansky, a flight engineer instructor for Hotel Company, 1st Bn., 214th Avn. Regt. The aircraft floors in the new Chinooks are similar to Air Force cargo planes. The floor panels can be flipped over to use the rollers.

Other notable upgrades to the MYII include but are not limited to, the Common Missile Warning System, Extended Range Fuel System II and the Digital Automatic Flight Control System.

The Chinook, the Army’s only heavy-lift helicopter, is a critical asset for transporting troops, supplies, and providing various combat support and combat service support operations.